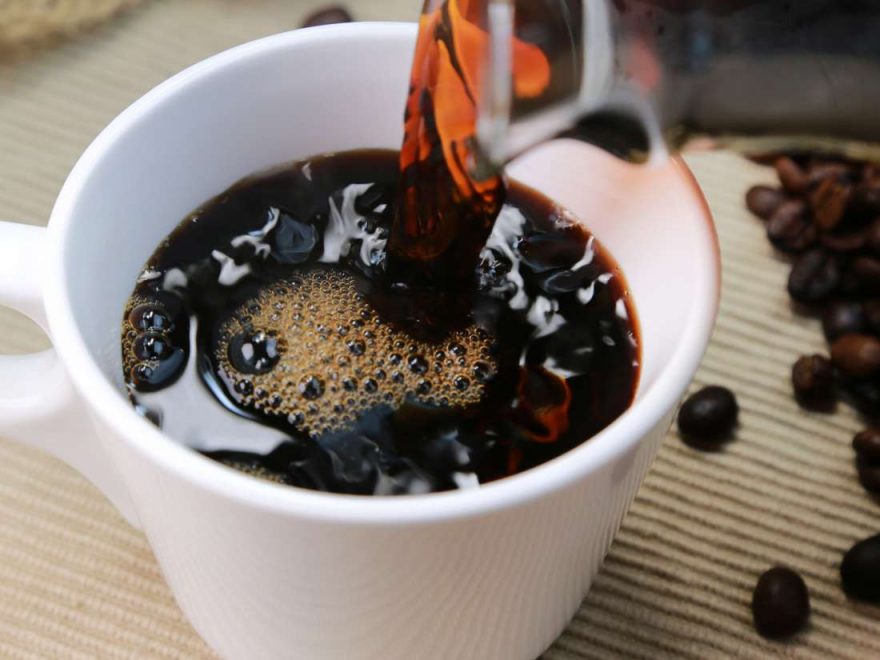 Caffeine acts quickly, and many people notice the effects within minutes. They last until the body fully metabolizes the drug. This duration depends on several factors.

Each person will feel the effects differently, and some may last longer than others. People who are pregnant or have difficulty sleeping should be careful about timing their caffeine intake and may want to avoid it altogether.

How long does it take to metabolize caffeine?

Caffeine has a half-life of about 5 hours.

Someone who consumes 40 milligrams (mg) of caffeine will have 20 mg remaining in their system after 5 hours.

When do effects peak?

Levels of caffeine peak in the blood within about 15–45 minutes of consumption.

They are then quickly metabolized by the liver.

Most people notice the strongest effects during this time, and many report feeling jittery, needing to urinate, and having sudden bursts of energy. These symptoms tend to go away as the caffeine starts to break down.

Can a person build up a tolerance?

As the body becomes resistant to the drug, people who regularly consume caffeine may barely notice its effects.

However, for someone who is very sensitive to caffeine, effects may persist for hours or until the next day.

How long do effects last?

There is no set time limit. The duration of the drug’s effects depend upon the dosage and on personal factors, including age, body weight, and how sensitive a person is to caffeine.

Foods and drinks that contain caffeine

Caffeine is usually found in beverages, including:

Even decaffeinated coffee contains some caffeine, and people who are very sensitive to caffeine should avoid it.

Caffeine can also be found in foods, such as:

Caffeine is also a common ingredient in weight loss pills and over-the-counter headache medicines, including Excedrin.

The amount of caffeine in products like coffee and tea varies, but the American Academy of Sleep Medicine has listed the following estimates:

Drugs that contain caffeine will display exact amounts on their labels.

People are usually warned not to consume caffeine while pregnant, as it can pose risks to the mother and child. While these risks diminish after birth, caffeine can affect a baby who is breast-fed.

Small amounts of caffeine can be transferred through breast milk, so anyone who is nursing should limit their caffeine intake before feedings. Most babies older than 3 months can tolerate these relatively small amounts. One study found that regular caffeine consumption by nursing women had little or no consequences on sleep patterns of babies and children aged over 3 months.

However, large amounts of caffeine can make babies fussy and irritable. It can also lead to trouble developing regular sleep patterns and other negative effects.

A doctor can provide specific recommendations, but there should generally be a 1–2-hour gap between caffeine consumption and nursing.

People will quickly realize when they have had too much caffeine. Be aware of the following symptoms:

People with kidney or liver problems may find their health gets worse when they have caffeine.

In some cases, caffeine can make fatigue worse. If someone is exhausted, they may benefit more from napping or practicing a relaxation technique before resuming activity.

Like other drugs, it is possible to become dependent on caffeine, and going without it can lead to symptoms of withdrawal.

These symptoms may resolve when a person consumes caffeine again. If a person is determined to stop, withdrawal symptoms often pass within a few days.

When a person who regularly consumed high amounts of caffeine stops suddenly, they may experience more severe withdrawal symptoms.

Rather than quitting abruptly, it may be better to gradually reduce caffeine intake until it can be eliminated without symptoms.

The effects of caffeine typically last for a few hours, unless someone has consumed a high amount or is especially sensitive to the drug.

Caffeine lingers in the body and may disrupt sleep patterns, even after noticeable effects have worn off.

While it is generally considered safe to consume caffeine while breast-feeding, it may be a good idea to cut off consumption 1–2 hours before a feed.

Anyone who regularly has trouble sleeping or waking up should discuss underlying sleep disorders with a doctor.

It may be a good idea to explore natural ways to increase energy levels.