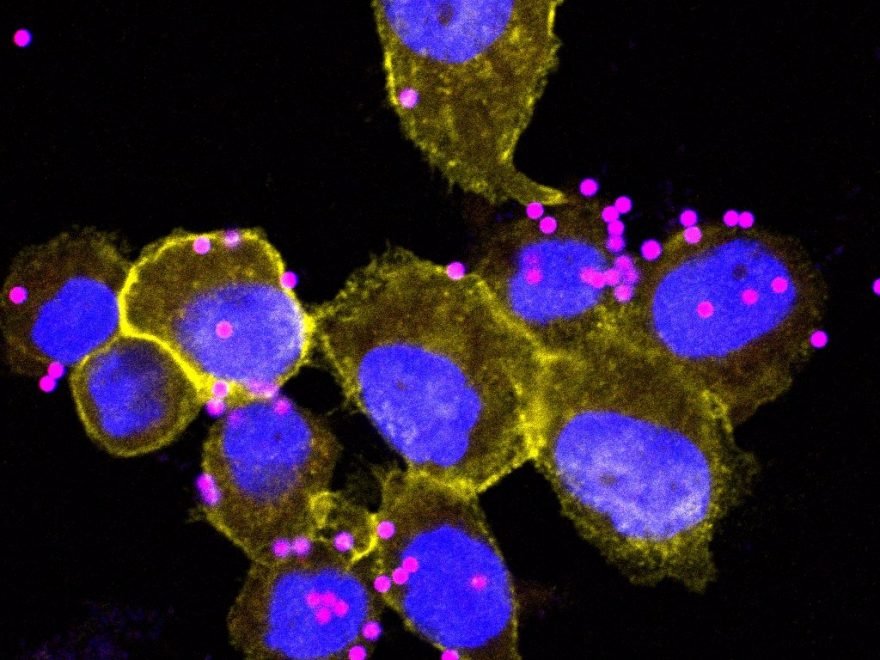 The first line of immune defense against invading pathogens like bacteria are macrophages, immune cells that engulf foreign objects that cross their way. After enclosing them in intracellular membrane vesicles, a process called phagocytosis, macrophages kill their prey with acid. However, it is not yet entirely understood how the acidification process is established. In their quest to systematically study proteins that transport chemicals across cellular membranes, researchers at CeMM characterized the critical role for transporter SLC4A7 in this process, providing valuable new insights for many pathologic conditions from inflammation to cancer. Their results were published in Cell Host & Microbe.

With their flexible and versatile surfaces, macrophages engulf invading microorganisms and enclose them in an intracellular membrane vesicle called a phagosome. To eliminate the threat and break it down to its constituents, the interior of the phagosome needs to be effectively and progressively acidified. For this crucial part of phagocytosis, the macrophages must undergo multiple metabolic changes, which are not yet entirely understood.

The team of Giulio Superti-Furga, scientific director of the CeMM Research Center for Molecular Medicine of the Austrian Academy of Sciences, discovered in their latest study that a solute carrier membrane protein plays an essential role in phagocytosis and phagosome acidification.

SLCs represent the largest group of transporter proteins responsible for the movement of chemical molecules across cellular membranes. As phagocytosis and the acidification of phagosomes require the exchange of ions and nutrients, the scientists in Superti-Furga’s laboratory hypothesized that SLCs might be essential for macrophages to undergo those processes. To test their hypothesis, the researchers developed an essay with special cells in which they impaired the 391 human SLC genes individually using CRISPR/Cas9 gene editing technology.

Those cells, each of which carried a single defective SLC gene, were subsequently tested on how they performed during phagocytosis. Strikingly, among all SLCs, SLC4A7, a sodium bicarbonate transporter, was the only one that turned out to be essential for macrophages to undergo phagocytosis and acidification. Cells with impaired SLC4A7 were unable to acidify their phagosomes, and by consequence, decreased their capacity to kill bacteria.

Having identified their prime candidate SLC4A7, the scientists, in collaboration with the laboratory of Nicolas Demaurex of the University of Geneva, investigated further and found the mechanism causing the impaired phagosome acidification. “SLC4A7 is located on the surface of macrophages and is necessary for bicarbonate import from the environment into the cell cytoplasm,” says senior author Giulio Superti-Furga. “The SLC4A7-driven bicarbonate import is essential for buffering the cellular pH during phagocytosis. If SLC4A7 was lost, the activation of macrophages led to accumulation of protons in their cytoplasm, which further inhibited the acidification of phagosomes.”