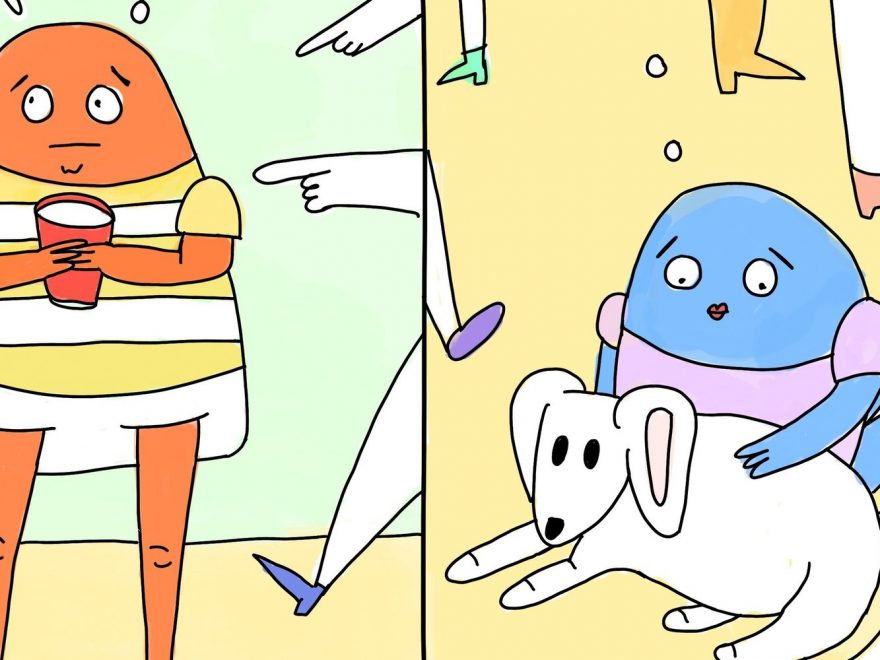 Introversion and social anxiety are often conflated, whether it’s in people’s minds or in memes on the internet. Here’s the reality: Preferring alone time is not the same as living with a mental health condition.

Introversion (the characteristic of preferring alone time) is a personality trait. Social anxiety (a phobia of being watched or judged by others) is a mental health condition, and it affects an estimated 15 million Americans. Of course, you can be an introvert and also have social anxiety. But the misperception that the two are one and the same does a disservice to those who fall under each category.

These easy-to-understand illustrations depict the differences between social anxiety and introversion, according to experts and research. Take a look: 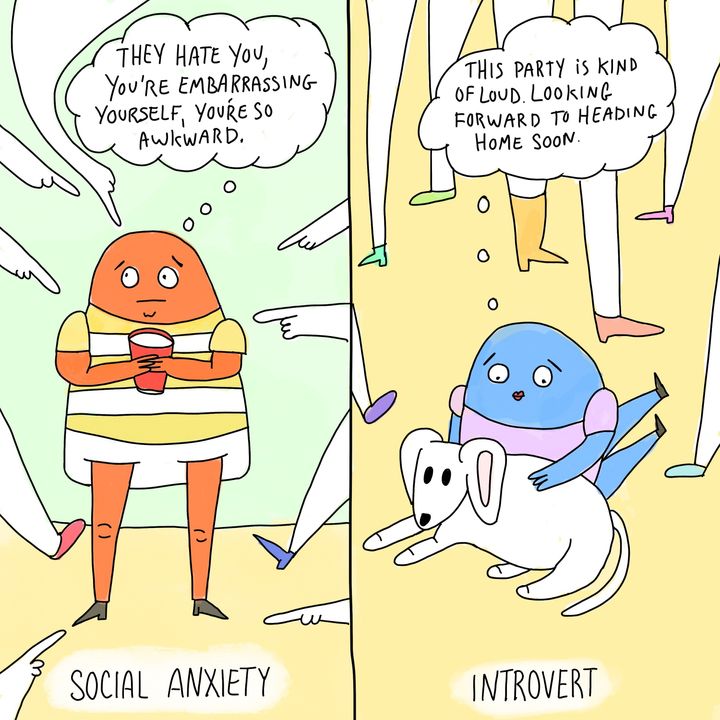 The thought of social interaction can be paralyzing for someone living with a social anxiety disorder, according to Victor Schwartz, the chief medical officer of the Jed Foundation, a suicide prevention organization.

“Introversion is a character style. The person may not like or may take time to warm up in social settings and might experience some manageable anxiety in social settings,” he said. “The person with social anxiety has more severe and acute anxiety when faced with or even thinking about social situations, and this will very likely cause functional limits.” This includes a fear or an avoidance of parties or other group settings, he added.

2. An introvert could be born with the trait. Social anxiety can develop based on a person’s environment. 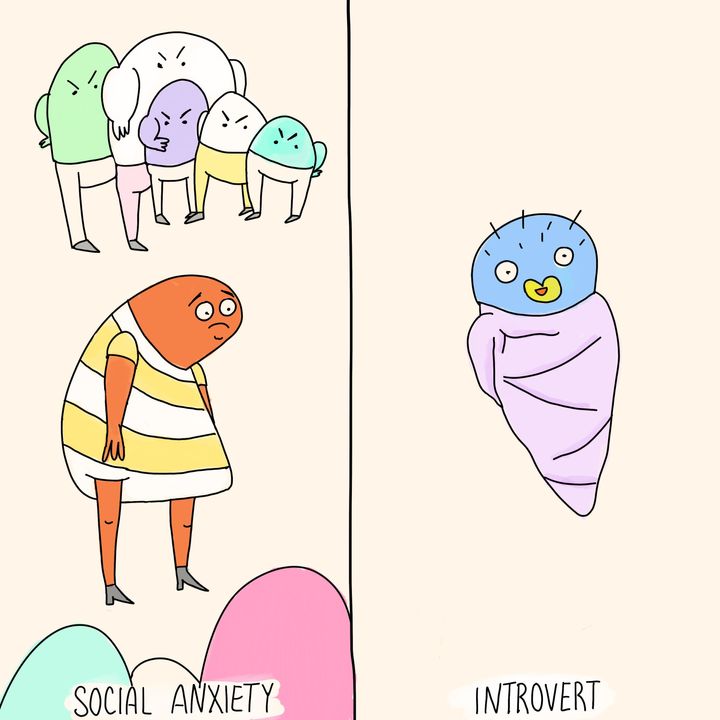 Social anxiety can manifest as a product of a person’s environment, according to clinical psychologist Ellen Hendriksen. For example, it can develop after bullying or some early form of social rejection. However, introversion is more of a characteristic that’s ingrained in a person from the start.

“Introversion is a trait, meaning it’s part of your inborn personality,” she wrote in a post republished on Scientific American. “But with social anxiety, while you may carry a predisposition toward it, you didn’t come out of the womb with it. Likely, a lot of learning went into its development.”

3. An introvert may enjoy downtime before going somewhere with a crowd. Someone living with social anxiety may have a panic attack. 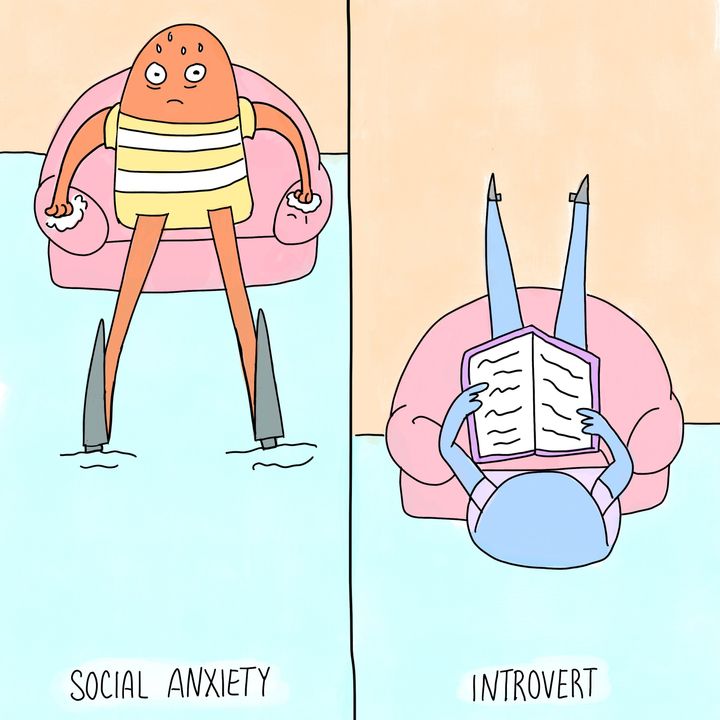 Introverts use their downtime before or after social engagements as a moment to recharge, as they gain or replenish their energy from being alone rather than from being around others. For those with social anxiety, anticipating a large gathering might cause extreme fear, panic or stress.

“Symptoms of social anxiety are the same as symptoms of anxiety in general. What differs is the setting or context,” Schwartz explained. Those can include “feelings of tension, jitteriness, difficulty sitting still or concentrating and physical symptoms like tightness in throat or chest, heart beating fast, sweaty palms and fluttery stomach.” 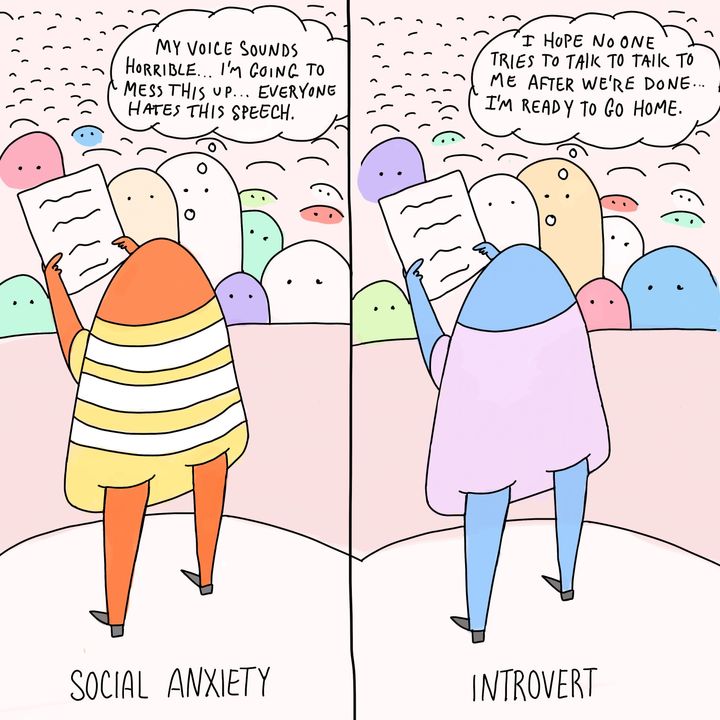 When it comes to public speaking or presentations, introverts loathe the meaningless talk after the event but may not hate the address itself. For those living with social anxiety, standing in front of a group is the problem. Perfectionism is a side effect of the condition, and those dealing with it are often afraid they’ll mess up or say the wrong thing.

“There are often thoughts about people disapproving or likely making fun of the person with anxiety,” Schwartz said. “People often expect they will be embarrassed or ashamed by something they will say or do — ‘My voice sounds funny’ or ‘I feel inarticulate’ or something like that.”

Bottom line: Inaccurate stereotypes can lead to wrongful stigma ― no matter if a person identifies as an introvert, someone with social anxiety or both.