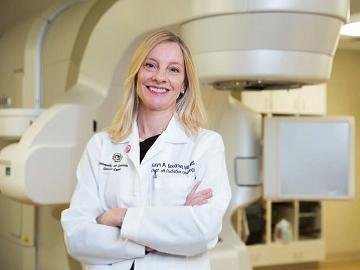 Survival results for the CALGB 80303 Trial presented today at the American Society of Clinical Oncology (ASCO) Annual Meeting 2018 demonstrate that esophageal cancer patients shown by PET scan to be non-responders to induction chemotherapy, and were then switched to a new chemotherapy during chemoradiation, showed median overall survival of 27 months. This improves on 18-month median overall survival of previous studies that used the same chemotherapy with non-responders during induction and chemoradiation treatment phases. Patients who were shown by PET to be responders to induction chemotherapy with the regimen FOLFOX and then stayed on FOLFOX during chemoradiation showed 55 percent 4-year survival, the best ever outcome reported for patients with this disease.

“Esophageal cancer patients undergo treatments to shrink tumors before surgery. We wanted to see if PET scan could help us personalize the best pre-operative treatment,” says Karyn Goodman, MD, MS, Grohne Chair of Clinical Oncology at University of Colorado Cancer Center, and the national study chair of the CALGB 80303 Trial.

Currently, patients with stage II/III esophageal and gastroesophageal cancers typically receive 5.5 weeks of chemotherapy with radiation (chemoradiation) followed by surgery. Chemoradiation before surgery has been shown to improve survival compared with surgery alone, but the optimal chemotherapy for this patient population remains unknown.

In all, 257 U.S. patients with adenocarcinoma of the esophagus or gastroesophageal junction received PET scan at the time of diagnosis and again after six weeks of induction chemotherapy with either FOLFOX or carboplatin/taxol.

After six weeks of chemoradiation including the same or the other chemotherapy regimen, patients underwent surgery, and then researchers followed their survival outcomes. Last year at ASCO 2017, Goodman and colleagues reported that changing chemotherapy regimen for non-responders increased the rate of pathologic complete response, meaning, “there were no traces of cancer in the tissue specimen taken at the time of surgery,” Goodman says. This year at ASCO, researchers present survival data in this same population.

“This makes sense,” Goodman says. “Again, these are patients who benefitted from induction chemotherapy, whether with FOLFOX or with carboplatin/taxol. We would expect them to live longer than patients who did not respond.”

In fact, it was impossible to accurately determine the median overall survival for patients who responded to FOLFOX during induction and then stayed on FOLFOX during chemoradiation, because more than half of these patients were still alive at the time of data analysis (the 55 percent 4-year survival listed above).

But the major update in outcomes was seen for patients who did not respond to induction treatment, and then switched to the other chemotherapy regimen during chemoradiation.