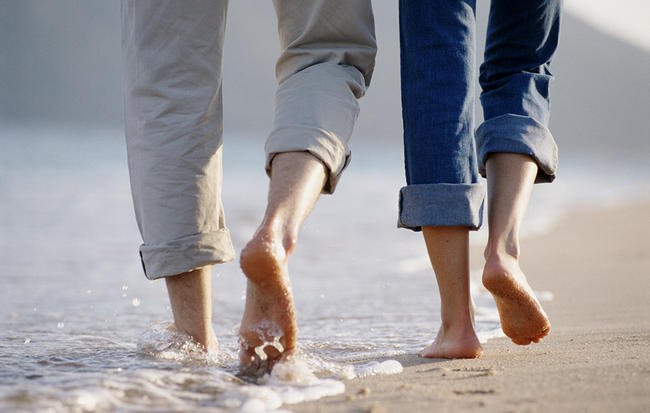 A couple in Ontario is speaking out after they say they contracted parasitic hookworms — just from walking on a beach in Punta Cana, Dominican Republic.

Katie Stephens shared the news on her Facebook page, detailing how she and her boyfriend Eddie Zytner contracted larva migrans, a.k.a. hookworms, in their feet after visiting Punta Cana. “If your feet become incredibly itchy, please get it checked out right away since we simply thought it was just bug bites and it became worse as each day passed,” she wrote, next to photos of her and her boyfriend’s swollen feet that were covered in bumps and blisters.

Eddie told CTVNews.ca that the couple noticed they were scratching their feet a lot during their trip. “Sand fleas we had heard about so we kind of assumed it was that at first,” he said. But a day after they came home from their trip, Eddie says his feet started to swell and eventually small bumps formed on his toes. Doctors weren’t sure what was happening and just sent him home with bandages, he said. And that’s when Katie’s feet started to swell up.

“I had a lot of itchiness during the trip,” she said. “I think I might have complained about it a little bit more that my feet were really itchy, but mine didn’t start swelling and everything until about the Sunday night.”

The couple finally went to the hospital, where a doctor realized what was going on. Emily and Eddie say they think they caught hookworms while walking barefoot on the beach at the resort where they were staying.

Hookworm larvae live in soil and sand and can penetrate the skin, according to Merck Manuals. They’re common in moist, hot areas of Africa, Asia, and the Americas, and they can move from someone’s skin into their lungs and intestines, causing stomach and chest pain and anemia.

However, Jennifer Wider, M.D., a women’s health expert, says you shouldn’t be too worried unless you live in a tropical climate. “Hookworm, while very common, is most prevalent in tropical areas where the sanitation is poor,” she says.

That said, if you’re planning a beach vacation, it might be smart to invest in some shoes you can wear in the sand. “It is preventable by wearing shoes and taking measures to avoid skin contact with the sand or soil,” says Wider. “Travellers to tropical areas with beaches should be advised to take precautions!”

Unfortunately, Health Canada, the Canadian department of public health, denied the couple’s prescription for ivermectin to treat the infection (the medicine is not licensed in Canada), so Eddie’s mom had to drive to Detroit to get it filled, CTV reports. They took it for two days and now say they’re starting to feel a little better—although they still need to use crutches to get around.

Eddie told CTV News that his feet “looked a little bit better yesterday. We’re getting our bandages changed again… so we’ll have another chance to look at them and see how it’s progressing.” The couple is also visiting a specialist to try to figure out how to treat the skin damage on their feet.

Katie warned people on Facebook to be careful when they visit tropical areas. “To anybody traveling somewhere tropical, please be careful when in the sand and wear shoes!” she wrote.

This article originally appeared on Women’s Health US