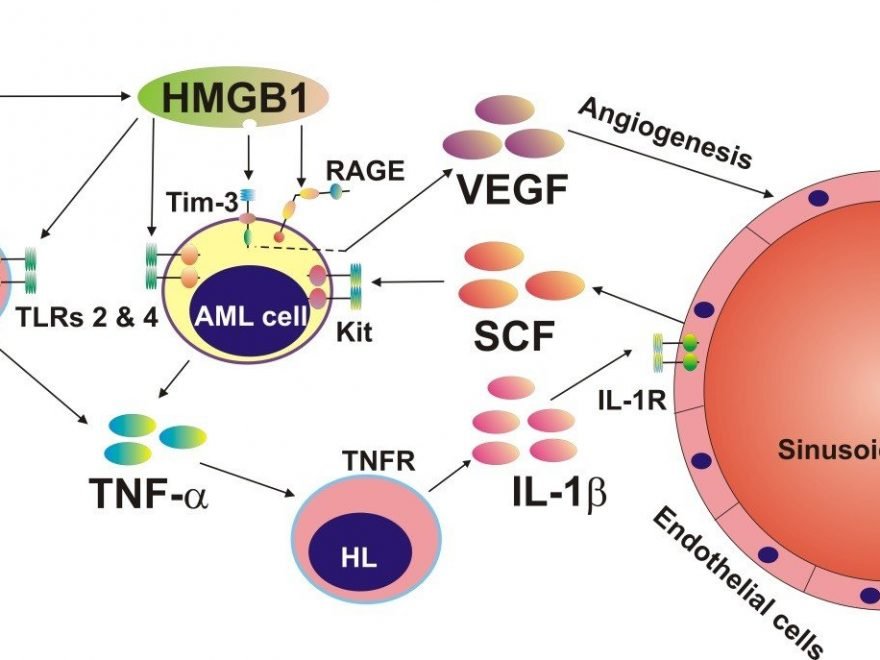 Two recent studies conducted at the Circular Dichroism beamline (B23) at Diamond Light Source have shed light on the way in which a subtype of leukaemia can proliferate in the body. The studies published in OncoImmunology and Nanoscale not only identified a number of key proteins that are involved in leukaemia progression, but showed that they could be used as docking points to deliver targeted therapy.

Acute myeloid leukaemia (AML) is a form of cancer that originates from white blood cells known as granulocytes or monocytes in the bone marrow. It is usually treated using chemotherapy, but some patients also require stem cell transplantation. Although the most common type of acute leukaemia in adults, the cellular mechanisms employed by AML cells to survive and proliferate are still being elucidated.

A large collaborative team led by researchers at the University of Kent, previously found that a protein known as high mobility group box 1 (HMGB1) triggers AML progression. To explore the effect of HMGB1 in greater detail, they used B23 to find out how it interacts with other proteins.

They saw that HMGB1 triggered the release of renowned cancer mediators: tumour necrosis factor alpha (TNF-α) and vascular endothelial growth factor (VEGF) and with the aid of B23 saw that it also acted as a ligand for T-cell immunoglobulin and mucin domain 3 (Tim-3). In parallel with this study, they targeted Tim-3 on the surface of AML cells with bespoke gold nanoparticles loaded with a cytotoxic drug called rapamycin. They saw that the drug was internalised within the cell and it perturbed signalling pathways. These insights not only offer immense potential for future AML therapeutics, but they might also have a role in the rapid diagnosis of leukaemia.

Leukaemia is a cancer of the blood and bone marrow, of which AML is just one of four main sub-types. AML is treated aggressively with chemotherapy and stem cell transplantation, and some novel targeted therapies are currently undergoing clinical trial. Interestingly, our immune systems also have the capability of killing cancer cells, but cancer cells such as AML implement mechanisms to deactivate immune cells and evade immune attack.

When AML develops in the bone marrow the growing number of abnormal cells creates a stressful environment that encourages the noncancerous surrounding cells to release a protein known as HMGB1. HMGB1 is sometimes referred to as an ‘alarmin’ (danger signal) because it acts as a danger signal to trigger signalling pathways and promote proliferation; however, it was unclear how leukaemia exploited this “alarmin”.

Dr. Vadim Sumbayev from Medway School of Pharmacy, University of Kent, the principal investigator, explained their motivation: “We were interested in the mechanisms of malignant blood cells to escape host immune surveillance. Our long terms goals are finding out how to disable these mechanisms in cancer cells, so that immune cells can work as normal and thus do their job and kill cancer cells. This would avoid the need to use harsh treatments such as chemotherapy or bone marrow transplantation.”

The team treated blood samples from AML patients with HMGB1 to see which proteins were upregulated. They also used circular dichrosim at B23, which was equipped with a highly collimated microbeam, to find out which proteins interacted with HMGB1 and to characterise their secondary structures.

The assays showed that HMGB1 could induce the release of TNF-α in AML cells, which triggered the production of stem cell factor (SCF). “Under normal conditions, SCF is needed for stem cell division and differentiation of white blood cells. However in AML, SCF becomes oncogenic, and the cancer cells encourage healthy cells to produce this for them,” clarified Dr. Sumbayev. 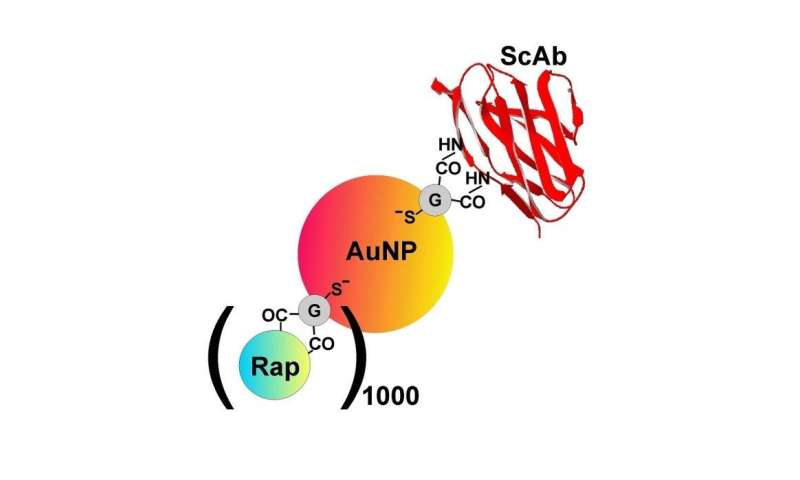 B23 demonstrated that HMGB1 interacted with an immune receptor called Tim-3. This receptor mediated the release of a well-known cancer growth factor called the vascular endothelial growth factor (VEGF), which plays a key role in angiogenesis.

“Our work demonstrates additional insights that the HMGB1 protein could be considered as a possible therapeutic target for anti-AML therapy. And actually it further confirms the efficiency of targeting the immune receptor Tim-3 for anti-AML therapy,” concluded Dr. Sumbayev.

The knowledge gained from the insights into Tim-3 and HMGB1 was used to devise a novel drug delivery approach in a parallel study in AML cells.

Researchers from the same institutions, led by Dr. Sumbayev, created 5 nm gold nanoparticles that were functionalised using single chain antibodies against Tim-3. Prior studies conducted by the team had demonstrated that the nanoparticles were biocompatible and displayed anti-inflammatory properties.

As well as containing the Tim-3 antibody, the remaining gold surfaces were covered with a cytotoxic drug called rapamycin. B23 was used to characterise the nanomaterials and to check their conformations. Dr. Sumbayev explained: “When you use nanomaterials, it is important to see what happens to the protein and the reactive components when they are attached to the surface. Firstly, you need confirmation that they have attached to the nanomaterial surface and secondly, you need to see how this changes the active molecules.”

When the functionalised gold nanoparticles were added to AML cell lines or AML samples derived from patients, the drug became internalised and successfully blocked survival translational pathway in the cells.

Despite their apparent therapeutic potential, Dr. Sumbayev was humble in his analysis: “These nanomaterials might be more applicable for diagnosis rather than treatment – it could be too hard to deliver the nanomaterials to the bone marrow. The nanomaterials could quickly detect abnormal cells, which is really important as this type of cancer is common in children and the elderly. Early diagnosis means that treatment can be initiated without delay.”

The team have also found a new biomarker on the surface of AML cells, known as latrophilin 1. Since it is not found on the surface of healthy blood cells it could be a very reliable marker for cancer diagnosis, and as such it has been patented by the University of Kent.

But the journey doesn’t end here for HMGB1: “We are going to further discover the mechanisms of regulation of the pathways that allow malignant cells to escape immune attack. We also are looking to find out whether the pathways are specific only to leukaemia cells or whether they exist normally and are just hijacked by the cancer cells,” explained Dr. Sumbayev.

For this forthcoming work Dr. Sumbayev intends to return to Diamond, and he has already submitted joint grant applications with the team at B23.