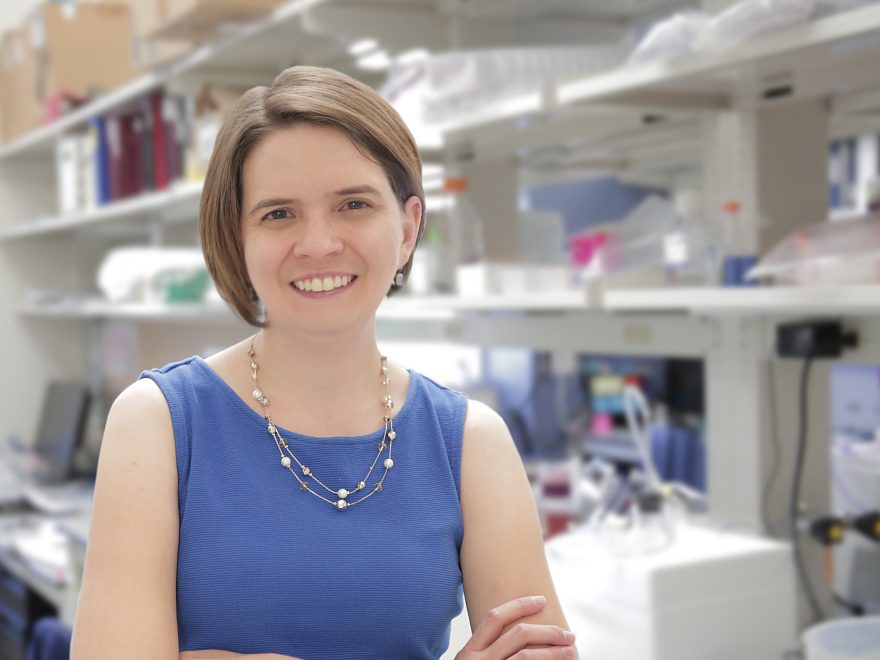 In order to spread their destruction, ovarian cancer cells must break free from their tumor home, travel through the fluid in the peritoneal cavity and attach to the outside of the abdominal organs—surfaces that are, by necessity, not sticky.

Despite these challenges, most patients with ovarian cancer are diagnosed after metastasis has begun, resulting in poor patient outcomes. While ovarian cancer is only the 11th-most common form of cancer among women in the United States, it accounts for the fifth-most deaths, according to the Ovarian Cancer Research Fund Alliance.

New research from the lab of Pamela Kreeger, a University of Wisconsin-Madison biomedical engineering professor, has identified one way ovarian cancer cells appear to successfully spread. The work, detailed today in the journal Cancer Research, could lead to new therapies to curb metastasis of these tumors.

“Like most cancers, it’s not the primary tumor that’s usually the problem. It’s the spread of the tumor to nearby organs that leads to serious complications,” Kreeger says. “So if you can slow that process down, it’s possible the patient will live longer and/or have a better quality of life.”

In studying high-grade serous ovarian cancer—the most common but also most aggressive type—Kreeger, postdoctoral fellow Molly Carroll and other lab members have teased out how one type of immune cells helps cancer cells attach in the peritoneal cavity, enabling metastasis. Higher levels of these immune cells, called alternatively activated macrophages, are associated with worse outcomes. But the question remained: Do these macrophages encourage metastasis?

“For me that was one of those scientific ‘ah ha’ moments—the interactions between the normal cells in our body can influence metastasis. In other words, it’s not all about the tumor cell,” says Kreeger.

But which of the 25 proteins the team detected in the co-culture device was responsible for this effect? Computational modeling revealed the culprit. The macrophages produce a protein called MIP-1β, which causes the mesothelial cells to produce more of an adhesion protein called P-selectin. P-selectin, in turn, allows the cancer cells to stick.

A preliminary experiment in mice validated those results, while human samples—obtained through collaborators in the UW-Madison School of Medicine and Public Health—showed that patients with ovarian cancer had higher levels of MIP-1β and P-selectin.

The good news: There are already several existing drugs, developed for other diseases, that could prove useful. Maraviroc, which is used to treat HIV, inhibits the receptor for MIP-1β, while two different drugs that target P-selectin are in clinical trials for blood disorders.

“We’re interested in pursuing multiple avenues, because it’s possible one will work better than another,” says Kreeger, whose group has filed a provisional patent on the findings with the Wisconsin Alumni Research Foundation. “It’s also possible one will have more tolerable side effects than another.”

Kreeger will use a recently awarded grant from the Rivkin Center for Ovarian Cancer to further validate the findings in long-term experiments in mice in order to set the stage for pre-clinical testing of drug treatments.

Carroll, the first author on the paper, says being able to target another aspect of the cancer’s spread beyond combatting tumor growth with chemotherapy opens new avenues for treatment.