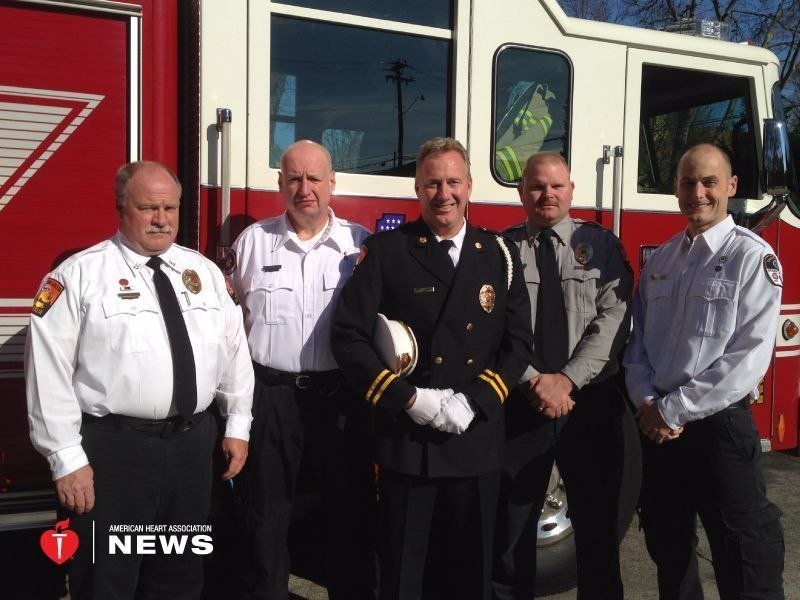 Firefighter Tony Spagnoletti was on overnight duty when he woke up with chest pains. He sloughed it off as “gas.”

“We’d been doing a rope rescue training earlier and I’d spent the day climbing up and down ladders,” Spagnoletti recalled of the night in 2012. “I was whipped but I didn’t notice anything unusual.”

But when the pain persisted, the trained emergency medical technician began to get concerned.

After chewing four baby aspirin, “I decided to get some oxygen from one of the trucks, but then I dropped the tank,” he said. “When I bent over to pick it up, the pain became the worst I’d ever experienced. Scale of 1 to 10, this was a 10.”

That’s when he called for help over the intercom.

Scottie Emerson, his captain at the time, said that when he came down the stairs, Spagnoletti was “as white as the firehouse walls.”

EMS arrived within minutes and transported Spagnoletti to a hospital, which was less than a mile away. Although Spagnoletti works for the fire department in Winston-Salem, N.C., he lives with his family in a small town about 40 miles away.

“If Tony had this heart attack at home, we’d have had to bury him,” Emerson said.

After arriving at the hospital, Spagnoletti went into cardiac arrest.

“I got tunnel vision and realized my pain was gone and I felt at perfect peace,” he remembers.

The next thing he knew, however, he was looking up at a nurse.

“I must have been dreaming,” he said to her.

“No,” she responded, “we just defibrillated you.”

Spagnoletti, who was 47 at the time, would learn that he’d suffered a particularly lethal type of heart attack called the “widowmaker,” caused by a blockage of the left main coronary artery that supplies most of the blood to the heart.

Doctors cleared the blockage and inserted a stent to prop open the artery.

“Everyone who touched me helped save my life,” he said.

Spagnoletti spent only two days in the hospital, in part because he’d been in such good physical shape prior to the heart attack. During cardiac rehabilitation, he was encouraged to continue exercising and to start eating more plant-based foods and fish, and less of his beloved red meat.

He was put on several drugs for his heart, blood pressure and cholesterol. He was also diagnosed with sleep apnea, a risk factor for heart attack. He now sleeps with a CPAP (continuous positive airway pressure) machine that keeps his airway open while he sleeps.

Seven weeks after his heart attack, Spagnoletti was back on the job.

Last September, he ran the Stephen Siller Tunnel to Towers 5K race from the Brooklyn Battery Tunnel to the site of the Twin Towers in New York City—while wearing his full firefighter gear.

Spagnoletti knows he’s lucky to be

alive but said almost everyone can learn from his experience.