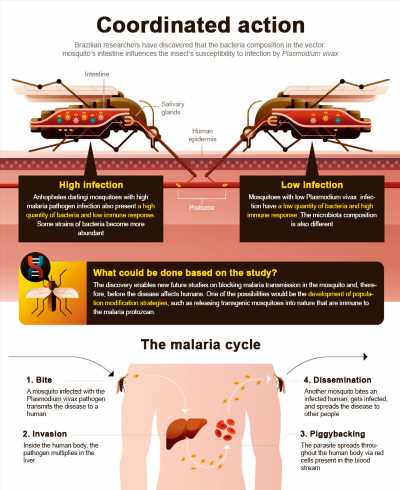 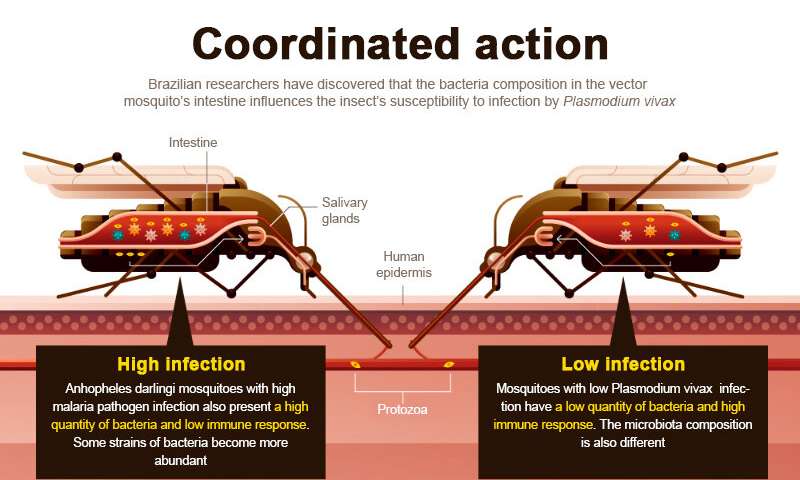 The bacteria that form the gut microbiota influence important processes of the human body, such as digestion, nutrient absorption, and defense against pathogens. The same type of relationship is present in most animals, including in the Anhopheles darlingi mosquito, the main vector of malaria in Brazil.

In the case of this insect, the composition of the gut microbiota appears to determine the susceptibility to infection by Plasmodium vivax – the species responsible for 90% of malaria cases in Brazil. That is, when the mosquito bites a sick human, an interaction occurs between the parasite and the insect’s intestinal bacteria, which is crucial for the disease transmission cycle to continue.

This was the conclusion of a study conducted at São Paulo State University (UNESP), presented Friday (22/11) in Lyon, in France, during the FAPESP Week France symposium. According to the researchers responsible, the discovery enables strategies to be devised for blocking malaria transmission in the vector.

“We discovered that, in the gut of Anopheles, the parasitic load has an influence on the composition of the microbiota and vice-versa. After further investigating the parasite-bacteria relationship, by incorporating microbiota composition data into genetic analyses relating to mosquito immunity, we intend to carry out gene silencing studies. The aim is to develop mosquitoes that are immune to Plasmodium vivax, that is, which do not get infected and, consequently, do not transmit the parasite to humans,” said Jayme Augusto de Souza-Neto, a professor at the Bioprocesses and Biotechnology Department of the Faculty of Agricultural Sciences at UNESP in Botucatu and coordinator of the project, supported by São Paulo Research Foundation—FAPESP.

The immune system is the key

This is the first study to analyze the transcriptome (the set of genes that is expressed) and microbiology of Anhopheles darlingi infected by Plasmodium vivax in an integrated way.

A previous study, conducted by another group of scientists using Anopheles gambiae mosquitoes infected by protozoa of the Plasmodium falciparum species, demonstrated that the microbiota influences the parasite’s development inside the mosquito. By comparing insects with and without bacteria in the gut, it was found at the time that the microbiota as a whole interferes in the development of the protozoa. It was discovered that, when there are no bacteria (when they are eliminated with antibiotics, for example), Plasmodium tends to develop more easily in the insect’s body.

The work carried out at UNESP makes advances by demonstrating that not only the presence of bacteria in the gut but, above all, the composition of that microbiota appears to play a determining role in the intensity of the infection.

The researchers also compared the transcriptional responses (the gene expression profile) as well as the load and composition of the gut microbiota of the mosquitoes. “There is a difference in microbiota composition between the groups of insects with high and low parasitic loads. This is probably related with immune response, which is different in these two groups,” he said.

The microbiota of the mosquitoes studied was basically composed of varied strains of two families of bacteria: Enterobacteria and Flavobacteria. “There is a dynamic. When the parasitic load increases, some specific bacteria become more abundant and others less so. They appear to act in this process in a highly coordinated way,” the researcher reported.

According to Souza-Neto, as the immune response is shared between the bacteria and parasite, the defense against the parasite also reaches the bacteria and vice-versa. “From observing this bacteria-parasite interaction we perceived that, in general, the bacterial and parasitic loads follow exactly the same tendency. The explanation seems to be related to the expression profile of the genes linked to the mosquito’s immune system,” he said.

“The transcriptome was associated with the mosquito’s complement system [proteins that form part of the immune system of invertebrates]. Previous studies have already related the response against the parasite with the complement system. Our interest lies in finding genes that, when superexpressed, make the mosquito refractory to infection by the protozoa, so that it also cannot transmit the parasite to humans,” he said.

Another possible explanation would lie in the microbiota’s response to the parasite. “The bacteria produce proteins, metabolites, or molecules with antiparasitic action. Reactive oxygen species, such as hydrogen peroxide, may help kill the Plasmodium. This direct action may occur independently and simultaneously to the mosquito’s immune system,” he said.

The discovery enables population modification strategies to be developed in the future, such as releasing transgenic mosquitoes that are immune to the malaria parasite into nature. The approach is different from population suppression, recently attempted in the fight against dengue, which involves releasing sterile females of the Aedes aegypti species.