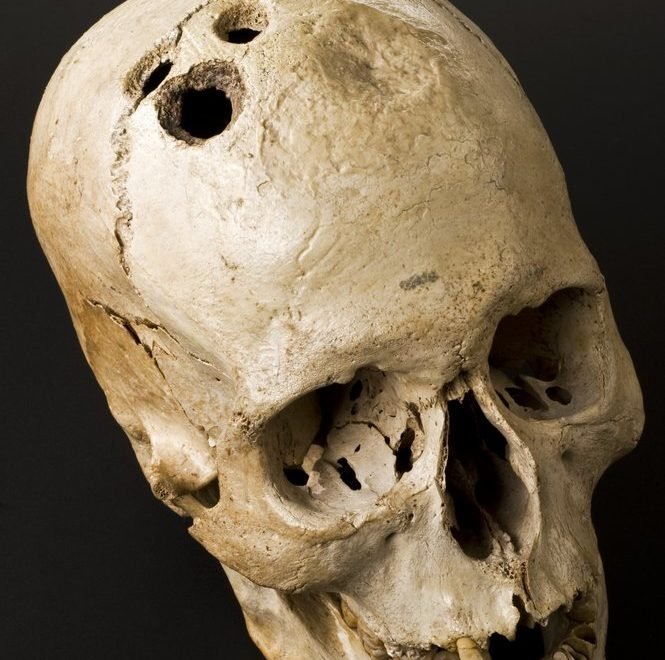 Paul McCartney revealed in a 1986 interview in Musician magazine that John Lennon once asked him and his wife, Linda, "You fancy getting the trepanning done?" He was referring to trepanation surgeries that put holes in the skull using hand drills, cutting or scraping techniques. "Trepan" comes from the Greek word trypanon, which, fittingly, means "a borer."

Trepanation is really an old term, also known as trephination, according to Dr. Raphael Davis, a neurosurgeon and co-director of the Neurosciences Institute at Stony Brook University. "It's been done for about 5,000 years, making one of the oldest medical procedures known to the human race," Davis told Live Science.

According to an article in the journal Surgical Neurology International, more than 1,500 trepanned skulls — or about 5 to 10 percent of all skulls found from the Neolithic period (which began about 12,000 years ago and ended about 4,000 years ago) — have been uncovered throughout the world, from Europe and Scandinavia to North America; from Russia and China to South America (particularly in Peru).

In the south-central Andean highlands, trepanations first appeared around A.D. 200 to 600, according to the University of California. The treatment was largely practiced until the early 16th century. An article in the journal World Neurosurgery reported that trepanation was widely practiced throughout China thousands of years ago.

Why did people do it?

In ancient times, trepanation was thought to be a treatment for various ailments, such as head injuries. It may also have been used to treat pain. Some scientists also think that the practice was used to pull spirits from the body in rituals.

Many times, the person would survive and heal after the surgery. Researchers have found scarring from trepanation on skeletons, but the holes and injury to the skull had healed, according to research published in the American Journal of Physical Anthropology.

One example of an unsuccessful procedure is a medieval woman who died while pregnant. The woman's skull had the telltale markings of a circular hole measuring 4.6 millimeters (0.2 inches) in diameter. "Our hypothesis is that the pregnant woman incurred preeclampsia or eclampsia [two pregnancy conditions involving high blood pressure] and she was treated with a frontal trepanation to relieve the intracranial pressure," the researchers wrote in a study published in the May 2018 issue of the journal World Neurosurgery. "Despite the intervention, she did not survive, and died with the fetus in her womb." [Related: This Medieval Mother Had a Gruesome 'Coffin Birth' After Medieval Brain Surgery]

Why do people do it today?

Drilling holes into a person's skull is still practiced today, although it's usually called a craniotomy. In this procedure, a surgeon removes a piece of the skull to access the brain in order to treat conditions such as brain lesions and brain tumors , according to Johns Hopkins Medicine. The piece of skull is replaced as soon as possible.

Occasionally, people will practice trepanation on themselves for various reasons. A rare few have the procedure done to "become enlightened" or to aid in their mental health in some way. For example, there is the case of Peter Halvorson. In the 1970s, he drilled a hole in his own head in an attempt to cure his own depression.