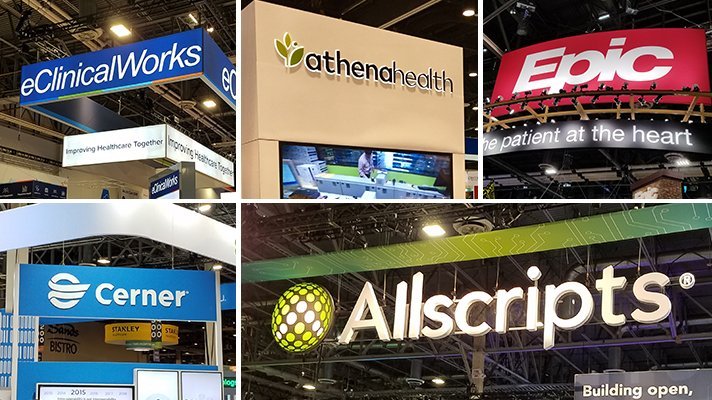 Artificial intelligence and machine learning permeated HIMSS18 such that the dynamic duo was just about everywhere in Las Vegas last week.

From expected experts such as long-time Google executive Eric Schmidt to surprise speakers, notably White House Senior Advisor Jared Kushner, discussing it on stage, the promise was palpable, the use cases more numerous than ever before.

Add EHR vendors to that roster. Allscripts, athenahealth, Cerner, eClinicalWorks and Epic revealed big plans for adding AI into the workflow in forthcoming iterations of their electronic health records platforms.

eClinicalWorks CEO Girish Navani said its next EHR — which he explained will be launched in October, available in early 2019, and on display at next year’s HIMSS Global Conference & Exhibition — will include distinct panels for pop health, telemedicine, voice interactions and machine learning-based clinical decision support, all running on perhaps a large Microsoft Surface screen.

Anyone who hoofed it over to Microsoft’s booth may have encountered a rendering of something at least conceptually similar in the form of a Surface monitor displaying Epic’s EHR and AI running in conjunction with Microsoft’s Azure. Ochsner Health System announced that after a three-month pilot it is moving the system into production to more accurately detect health patterns so it can create more proactive preventative treatment plans.

Epic on Friday unveiled a new partnership with Nuance to integrate the latter’s AI-powered virtual assistant into the Epic EHR workflow.

Athenahealth, for its part, brought a virtual assistant called Epocrates Connect that it said improves connectivity via smartphones and in late January the company partnered with NoteSwift to inject AI into the workflow with a focus on making charting easier for doctors.

Wait, should AI be free?

EHR vendors were not the only ones giving a glimpse of AI. In addition to so many startups on the HIMSS18 show floor, Siemens Healthineers showed AI features in its cloud-based imaging software and Caradigm said it is adding AI into its population health tools.

Caradigm’s CEO Neal Singh struck a bold tone about the future of artificial and machine learning, too.

“If you think about AI, most vendors say they’re an AI company — but AI should be free,” Singh said. “We want AI to be a core capability not a product. AI shouldn’t be a separate thing, it should be infused ambiently and embedded into workflows.”

Saying that AI should be free naturally evokes ‘it depends on what your definition of the word free is,’ because it makes more sense for existing tech companies than pure-play AI upstarts.

Hospitals have to pay for Caradigm’s platform or subscribe to eClinicalWorks cloud service, of course, but at least those two vendors are saying that they will not charge extra for the AI and machine learning capabilities. An Epic spokesperson said the there is a ticket price or the Nuance tool but not an additional license from the EMR maker.

It’s worth pausing to note that what we saw at HIMSS18 was marked progress on the AI and machine learning fronts — it was a beginning, not an endpoint, to incorporate the technologies into next-generation EHRs, imaging and pop health platforms.

What healthcare has now: A path forward

Whether AI ends up coming from a not-yet-known killer app that ties data sources and information together in new ways much like e-mail, the Internet and smartphones have done or from tech stalwarts incorporating it into their platforms, or some combination of both, one thing emerged at HIMSS18: Healthcare is at a critical moment for both data and innovation.

Indeed, what we actually need for AI and machine learning to advance is clean data for inward and outbound connectivity that fuels interoperability and modern data exchange. Without those, AI and analytics tools will be limited by dirty data.

“Healthcare is becoming an information science,” Google’s Schmidt said, explaining that patients have an average of 5 GB of health data, most of it in images. And the combination of cloud with deep neural networks has enabled Google and other companies to advance AI by taking a set of labeled data and feeding it into neural machine learning to get a model.

“The primary progress in the next few years for machine learning will involve EHRs, quantitative observations, applying ML to genetic variant calling, and medical imaging,” Schmidt said. “Can you imagine when we have sensor data plus continuous patient data? This data explosion is profound.”

Yes — and one would be hard-pressed to walk away from HIMSS18 without a spark of optimism that we now have a better understanding of what’s on the road ahead to artificial intelligence and machine learning being put to practical and tangible use.

An inside look at the innovation, education, technology, networking and key events at the HIMSS18 global conference in Las Vegas.