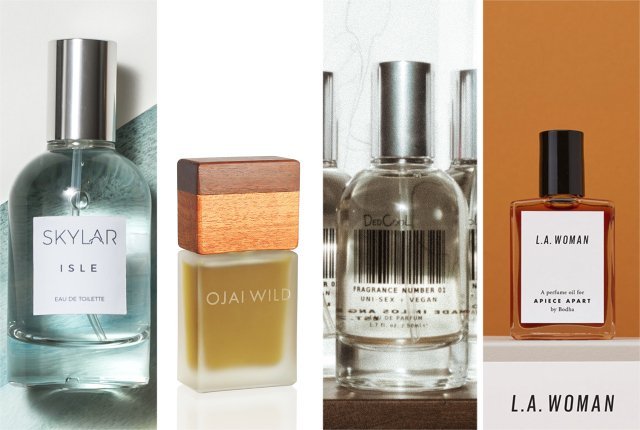 DedCoolEncouraged by her parents (the founders of the natural skin-care brand La Natura), Carina Chazanas created her first fragrance line when she was 16, a namesake brand that evoked a young, feminine vibe. Eight years later, a penchant for wearing men’s fragrances inspired Chazanas, a tomboy at heart, to launch her second brand, DedCool, which is genderless, vegan and nontoxic. “I wanted the concept to be that anyone can wear it and to abide by my own green beauty regimen,” said Chazanas. To appeal to all genders, the minimalist bottles are branded with a barcode unique to each scent, which are all named after a number, like Fragrance 02. The scents are inspired by her hometown of Los Angeles, and use ingredients sourced in the U.S. Prices range from $40 for a roller ball to $70 for a 1.7-oz. bottle; retailers include select Neiman Marcus, Credo Beauty, Riley Rose and Urban Outfitters doors. “Generation Z and Millennials are understanding that they don’t have to spend a lot for a good product,” said Chazanas. “DedCool introduces the idea that don’t have to use animal ingredients or any harmful components. I’d love to educate the consumer and move toward a greener world.”Skylar BodyAfter her newborn had an allergic reaction to her scent, Cat Chen was inspired to create a hypoallergenic fragrance brand. A former Honest Company executive, Chen had switched to ‘clean’ beauty products, but couldn’t find a comparable alternative for fragrance. Thus was born Skylar Body, which combines natural and synthetic ingredients deemed safe by Chen. “Our ultimate goal is that people can know it’s possible to have a clean and healthy fragrance,” she said. “We want to have a layer of transparency that we feel is lacking in the fragrance industry.” Chen launched Skylar in April 2017 with four fragrances—Arrow, Coral, Isle and Meadow, $78 each for a 1.7-oz bottle. Following a $3 million seed investment from Upfront Ventures, the company launched candle versions of the four scents in January, $38 each. “Women are looking for something good and not necessarily all natural,” she said. “They love the complexity and layers of all scent notes, so we wanted to combine nature and science for a hypoallergenic product.” Skylar Body’s sole point of distribution is its e-commerce site, and Chen has no immediate plans to expand to other brick and mortar or online retailers. “Our customer is savvy and has questions about ingredients. The direct connection means we have that relationship with her and can provide that information.”Ojai Wild Using her background in art and perfumery, Janna Sheehan launched Ojai Wild to pay homage to the landscapes and natural materials of California’s Ojai Valley. “It’s a very artistic process for me,” said Sheehan, who is a painter, printmaker and perfumer. “The objective is to revere the essence and raw aspect of the botanicals and give the fragrances context like a painting.” Ojai Wild’s scents are formulated with California-sourced botanical ingredients, like juniper berry, white sage and redwood leaves, many harvested from Sheehan’s own farm. No heat is used in the formulation process because Sheehan wants to include the raw essence of the ingredients.  Because of Sheehan’s no-heat formulation process, each batch of the brand’s four fragrances—White Sage, Juniper Berry, Redwood Leaves and Pink Peppercorn—isn’t completely the same. “The beauty of nature is it’s not exact,” Sheehan said of the scents, which cost $98 for 1-oz. and are sold in 15 doors including Shen Beauty and C.O. Bigelow. “The experience with these fragrances is different than others where people expect the exact same thing.”Apiece ApartWomen’s clothing label Apiece Apart entered the fragrance game late last year with the launch of its first scent, Woman, which was made specifically for its New York storefront. Now with its recently opened Venice, Calif., location, designers Laura Cramer and Starr Hout are launching their second fragrance, L.A. Woman. For the new scent, the designers teamed up again with Emily L’Ami, the perfumer behind Bodha Modern Wellness, to include the benefits of aromatherapy into the fragrance formulation. While the first scent had earthy and woody notes to evoke New York’s energy, L.A. Woman is based on a Los Angeles sunset with bright notes of orange and jasmine and is blended with an organic jojoba oil base to give it an aromatherapy quality. Each is $98 for 0.5-oz. Cramer and Hout decided to go the natural route for the scents because of their children. “Going through pregnancy and seeing the amount of synthetic fragrances and chemicals around us, we realized how important it was to do a natural fragrance,” Cramer said. Hout added: “One of the things we’ve both learned is how to take care of ourselves better as mothers and business owners. have this idea of being a ritual you do for yourself and a reminder to take care of yourself.”