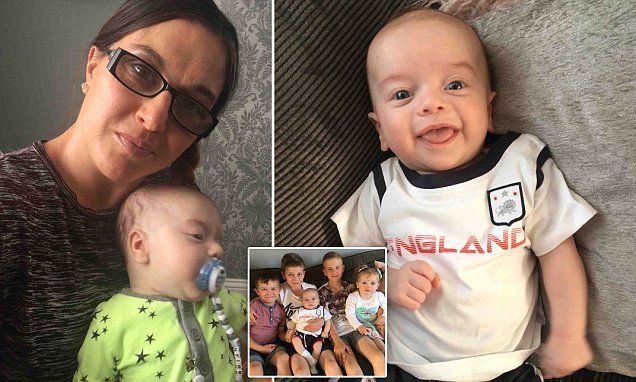 A baby is fighting for his life after being diagnosed with a rare cancer that affects just 88 people worldwide.

After he was struggling to breathe last May, four-month-old Roman Hansen was initially diagnosed with the viral infection bronchiolitis until tests revealed he was suffering from a collapsed lung and had to have 15 per cent of the organ removed.

Thinking the worst was over, his devastated parents Amanda, 31, and Stephen Hansen were told their 15-week-old baby had a rare cancer of the chest, known as pleuropulmonary blastoma, just one week later.

The youngster requires nine rounds of chemotherapy and has to spend nine months in hospital.

Mrs Hansen, from South Shields, who stays at her son’s bedside, said: ‘There are no words to describe how we are feeling. Our world has been turned upside down.’

Roman’s father has been unable to work since the diagnosis while he looks after the couple’s other four children. The pair are speaking out to raise money to help them cope financially. 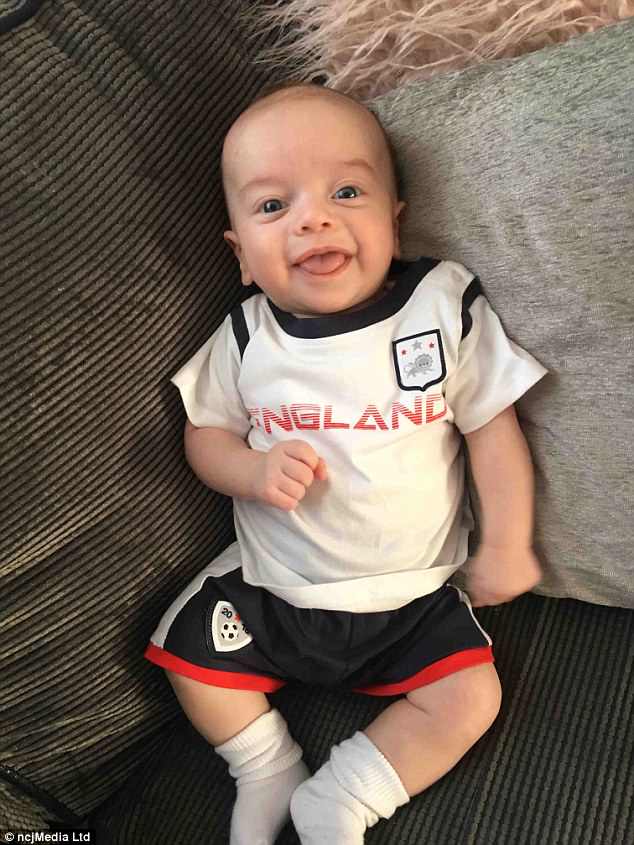 Four-month-old Roman Hansen is fighting for his life after being diagnosed with a rare cancer of the chest, known as pleuropulmonary blastoma, which affects under 90 people worldwide 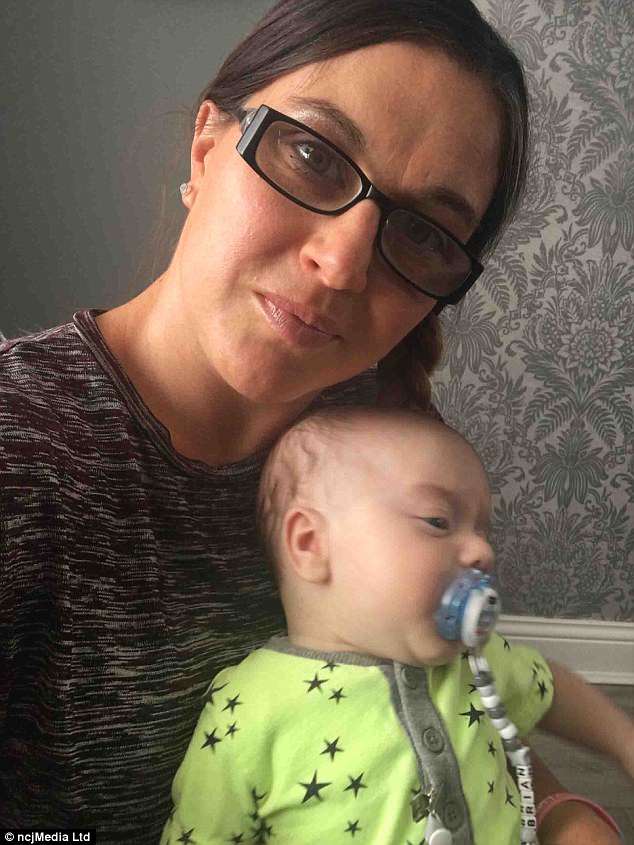 His mother Amanda Hansen (pictured), 31, said: ‘Our world has been turned upside down’ 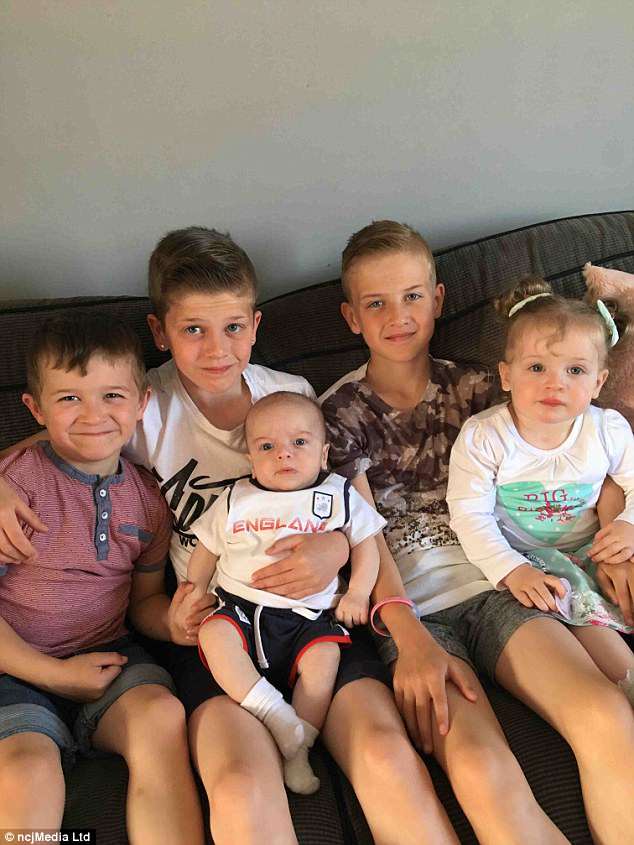 Roman’s siblings have been affected by the ordeal, with 20-month-old Scarlett (far right) asking where her mother is while she stays at her baby brother’s bedside. (Left to right: Bailey, six, Brandon, nine, and Brooklyn, 11). Roman is due to spend nine months in hospital

‘He was struggling to breathe’

Mrs Hansen first realised something was wrong when Roman did not wake up for a feed on May 22.

‘He had not woken up for his bottle and something did not feel right.

‘I went to check on him and he was not breathing properly. I ended up ringing 999. An ambulance took him to South Tyneside Hospital.

‘My mother’s instinct had kicked in from the start. Something was not right and I started questioning everything.

‘Roman was sweating profusely and he was going a funny colour. He was struggling to breathe.’

After being diagnosed with a collapsed lung, the youngster was transferred to the intensive care unit at Newcastle’s Royal Victoria Infirmary.

Roman then went to the Freeman Hospital for emergency surgery, with his parents being told days later he had cancer. 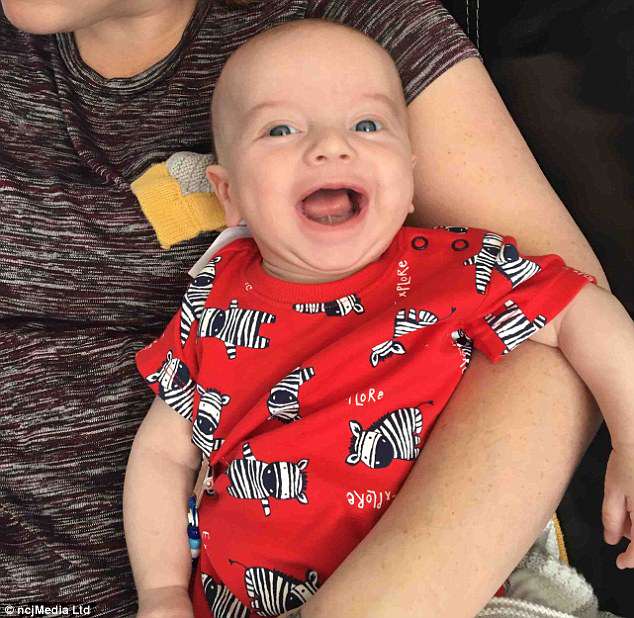 WHAT IS PLEUROPULMONARY BLASTOMA?

Pleuropulmonary Blastoma (PPB) is a rare type of childhood lung cancer that begins in the chest.

It is thought to have just 88 known sufferers worldwide.

PPB often starts with cysts on the lungs.

Not all sufferers have symptoms, however, these can include:

These symptoms mean PPB is often initially misdiagnosed as pneumonia.

PPB’s cause is not always clear, however, around two out of three cases have a specific genetic mutation that may increase their risk.

‘We don’t know what is going to happen’

Mrs Hansen said: ‘I am in hospital with Roman and I am sleeping here with him.

‘Stephen has not been to work ever since this has happened and he is also trying to look after our other children.

‘We are being given a lot of support from our family and friends, and we can’t thank them enough. We just don’t know what is going to happen.’

The couple’s other children – Brooklyn, 11, Brandon, nine, Bailey, six, and Mia-Scarlett, 20 months – are also struggling to cope with the upheaval.

Mr Hansen said: ‘This has been so difficult for them all. Mia doesn’t understand what is happening and why I’m not at home.

‘We are just trying to continue with life as much as possible, making sure the children get to school and are being looked after.

‘At the same time we are looking after Roman and want him to get better.’

A team of specialists in Minnesota, US, will be looking into Roman’s condition as part of a research programme.