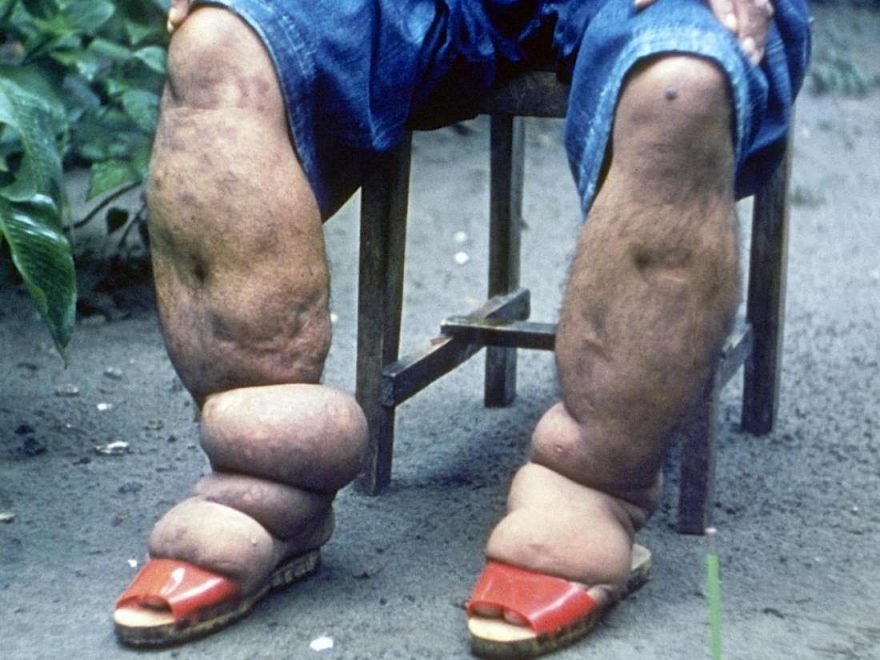 Although medically known as lymphatic filariasis, the term elephantiasis is commonly used because symptoms include swelling and enlargement of the arms and legs.

The World Health Organization (WHO) estimate that 120 million people worldwide are affected by elephantiasis.

Read on to learn more about treating and preventing this neglected tropical disease.

What are the symptoms?

Most people who are infected will not show symptoms, despite damage to the lymph system and kidneys.

Those who do get symptoms most commonly experience swelling of the:

People with elephantiasis will have impaired immune function because of damage to their lymph system. They tend to get more bacterial infections of the skin, causing it to become dry, thick, and ulcerated with repeated infections.

Other symptoms during these repeated bacterial infections include a fever and chills.

To diagnose elephantiasis, a doctor will:

A blood examination will be required to confirm a parasitic infection. In most parts of the world the roundworms are most active at night, so the blood sample must be collected during this time, according to the Centers for Disease Control and Prevention (CDC).

Alternative tests may be used to detect the parasites, but they may show negative results because symptoms can develop years after the initial infection.

X-rays and ultrasounds may also be done to rule out other conditions that could be causing the swelling.

People with an active infection can take medications to kill the worms in the blood. These medications stop the spread of the illness to others, but they do not completely kill off all the parasites.

Antiparasitic drugs that may be prescribed include:

Other symptoms may be managed with:

Not everyone with elephantiasis will need medication. This is because they may no longer carry the worms in their system despite the presence of symptoms. People can manage the swelling and skin infections in these cases by:

Surgery may be recommended in rare cases to remove damaged lymphatic tissue or relieve pressure in certain areas, such as the scrotum.

Some people with elephantiasis may wish to seek emotional and psychological support in the form of:

Are there any complications?

Without medical treatment, the microscopic parasites may live for years in the lymphatic system, causing destruction and damage.

The lymph system is responsible for transporting excess fluid and proteins and fighting infections. Fluid builds up when it does not function correctly. The accumulation of fluid leads to swelling of the tissue and reduced immune function.

Elephantiasis is associated with several physical and emotional complications, including:

The best way to prevent elephantiasis is to avoid mosquito bites.

People who visit or live in countries at risk should:

Elephantiasis is a tropical disease spread through mosquito bites. People living in affected tropical or subtropical areas are most at risk of infection. However, short-term visitors to these regions have a very low risk of getting elephantiasis or related conditions, according to the CDC.

People with symptoms of the condition, including swelling and skin thickening, should see their doctor immediately. Elephantiasis symptoms can be managed through medications, lifestyle changes, and emotional support.