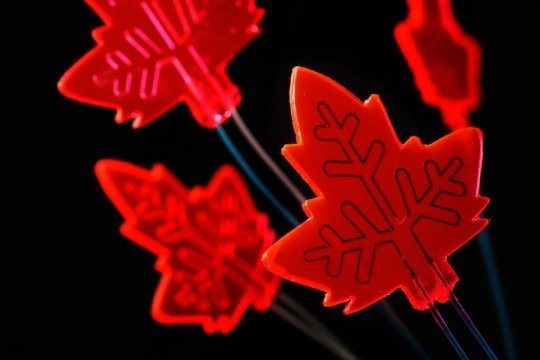 Using sunlight for sustainable and cheap production of, for example, medicines. The ‘mini-factory’ in the form of a leaf that chemical engineers from Eindhoven University of Technology presented in 2016 showed that it is possible. Now the researchers have come with an improved version: their ‘mini-factory’ is now able to keep production at the same level, irrespective of the variation in sunlight due to cloudiness or time of the day. As a result, this boosts the average yield by about 20%. This is due to a clever feedback system costing less than 50 euros that automatically slows down or speeds up production. This has removed a significant practical barrier for green reactors that operate purely on sunlight.

With their ‘artificial leaf’ researchers, under the guidance of the Eindhoven chemical engineer Timothy Noël, reaped a lot of admiration about a year and a half ago. First they succeeded in making chemical reactions possible with sunlight — something that had previously seemed almost impossible. Chemists had dreamed of this possibility for ages, but the problem was that the amount of sunlight was not sufficient.

Their breakthrough can be partly attributed to the use of relatively new materials (so-called luminescent solar concentrators) that seal in a specific part of the sunlight inside, in a similar way to plants that do this using special antenna molecules in their leaves. The second discovery was to apply very thin channels in these materials, through which liquids are pumped thereby exposing the liquids to sufficient sunlight to allow chemical reactions to take place. The end products then flow out at the extremities of the channels.

Problem: not always the same amount of sun

One of the biggest practical problems to apply this on a large scale is that there is not always the same intensity of sunlight. Because, for example, the sky is cloudy or the sunlight varies in intensity and composition during the day. “If there is too much light, you get unwanted by-products and if there is too little light, the reactions do not take place or do so too slowly,” Noël explains. “Ideally, the system should automatically adapt to the amount of incoming sunlight.”

The feedback system developed does exactly that. It consists of just three relatively simple elements. A light sensor measures the amount of light that reaches the channels. A microcontroller translates this signal to a pump speed. And the pump drives the fluids through the channels at that speed. All this costs less than 50 euros. Experiments to determine the required pump speed for a specific light intensity enabled the researchers to optimize the feedback loop.

Test on the roof

In addition to lab testing under artificial light, they also tested their system outdoors in natural sunlight, on top of the roof of one of the buildings on the TU/e campus. At a yield setting of 90%, the system kept production stable for an hour at between 86% and 93%. The same system without feedback looping varied significantly between 55% and 97%. The average yield was increased by about 20% thanks to the feedback loop.

According to Noël, this brings a cheap and sustainable reactor considerably closer to being able to produce chemical products on a large scale, wherever you want, with only sunlight as an energy source. “It is inevitable that energy prices will rise. And with a source of energy like the sun that is free and available, these kinds of technological solutions can make the difference.”