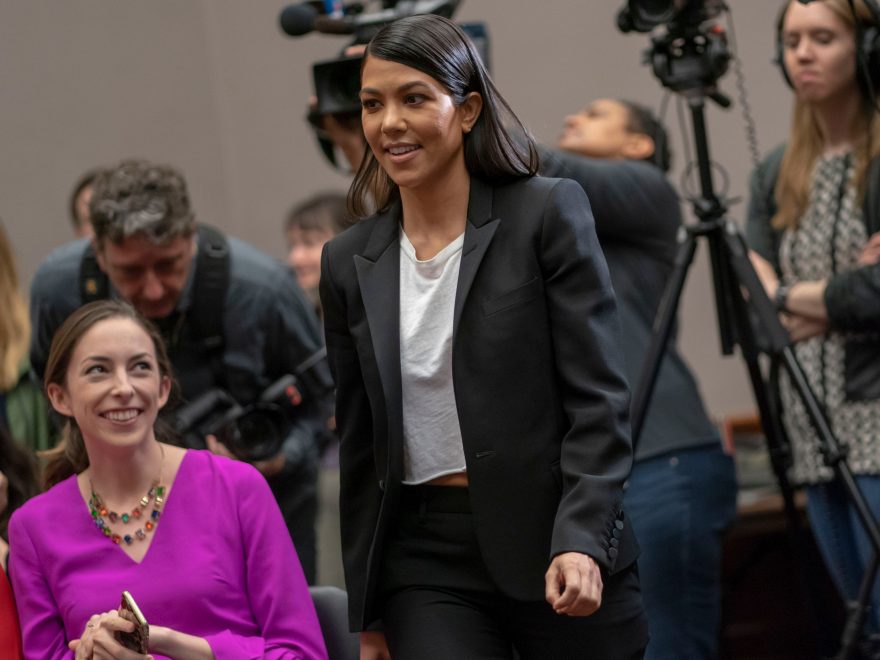 Kourtney Kardashian is stumping for more government oversight of the beauty industry. The eldest Kardashian sister made a trip to Washington, D.C., this week to help the non-profit Environmental Working Group brief staffers of the Senate Committee on Health, Education, Labor, and Pensions on the Personal Care Products Safety Act, introduced last year by Sen. Dianne Feinstein (D., Calif.) and sponsored by Susan Collins (R-Maine).The act is aimed at updating the Federal Food, Drug and Cosmetic Act, which has remained unchanged for more than 80 years, and giving the Food and Drug Administration more authority in the beauty industry. Specifically, the bill would give the FDA the power to develop and implement cosmetic manufacturing standards, to inspect a company’s cosmetic safety records, to recall a cosmetic that is likely to cause serious adverse health consequences, and encourage cosmetic safety testing practices that minimize the use of animals.It would also demand that cosmetic and personal-care product manufacturers report to the FDA things like chemical safety reviews and possible contaminants and give the FDA the authority to clear the market of a contaminated or dangerous product, if a company fails to do so on its own.During the briefing, Kardashian told members of the committee she became interested in product ingredients when she had her first child.“I really started learning so much about the foods I was feeding him and it kind of all snowballed,” Kardashian said. “I would get so many baby gifts and a lot of it was products, skin-care products for my kid, and I would use the things that people sent me just assuming these are baby products and that they should be safe.”She went on to note that even “the best products that you can buy” turned out to be made with “toxic chemicals.” If the proposed amendment takes effect, the first ingredients to come under FDA review will be diazolidinyl urea, lead acetate, Methylene glycol/methanediol/formaldehyde, Propyl paraben, Quaternium-15, all of which are common chemical preservatives.“Even going into a store to buy just about anything — you shouldn’t have to walk around aimlessly asking ‘is this OK?’ ‘Is this not OK?’ Everybody should have the right to healthy products,” Kardashian said. “So that’s why I wanted to come here and make it a bigger deal.”The briefing coincides with the launch of her cosmetics line, Kourt x Kylie, with her youngest sister Kylie Jenner as part of her popular Kylie Cosmetics brand.Ken Cook, president and cofounder of EWG, which specializes in research around toxic chemicals in consumer products and foods, among other environmental issues, noted that it’s been “difficult to move legislation recently,” but said such a bipartisan bill that affects a huge group of consumers should get through.A spokeswoman for Feinstein said part of the reason for the briefing with Kardashian and EWG was because the senator is hoping to get the bill through the committee this spring. If it clears that hurdle, the bill would then move on to the House floor for action and then to a conference committee before it’s ready for a signature from the president. The spokeswoman declined to comment further on the bill.As for some criticism that the bill isn’t necessary because ingredients are required to be listed on all product labels in order of the amount used, from most to least, and asked if she looked at labels, Kardashian said, “it’s hard to always have the time.”“I think there are so many people that don’t have the information,”  Kardashian said. “And they don’t even think twice when they go to the store that some of these products might cause cancer and all these other health issues that people are having.”Chemicals like lead acetate are known toxins and linked to health issues like organ and blood toxicity as well as allergies, but many other common beauty product ingredients are only “expected” to be toxic or harmful, as there is little research on their long-term and cumulative effects.For More, See:RealSelf Going International With New $40 Million Elephant InvestmentD2C Hair Color Brand eSalon Moves Into RetailNet-a-porter Shares Beauty Shopper Trends and Insights