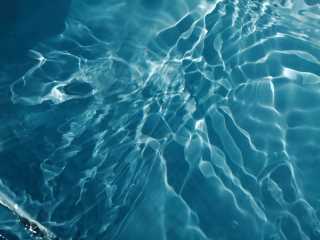 Beauty ingredient blacklists may be about to get even longer.
For some beauty brands, ingredient no-no lists are evolving from cutting out ingredients that could cause harm to humans, to nixing ingredients that could cause harm to the earth. In some circles, the concept is referred to as “blue beauty,” which refers to products that look out for oceans and water supplies.
The idea is that certain chemicals — including oxybenzone, triclosan, parabens, and 1,4-dioxane — may be hard to filter out of water supplies once they are washed down the drain. Then, those ingredients can wind up hurting ocean-based creatures, and potentially, the humans that eat them, say blue beauty advocates.
It’s not exactly a new concept, according to Tara Foley, who said that Follain, the clean beauty retail concept she founded, has been looking at ingredient lists in a holistic way since 2013. “When we were coming up with that list of ingredients that we didn’t want to have in products, we were thinking about the reasons why we didn’t want to have them in there, not just in terms of the impact they have on humans immediately when applied to the skin, but also the impact…for environmental and public health,” Foley said.
“Until everybody in the world stops using parabens in lotions, parabens are going down the drain and into the water system, and our waste treatment…facilities are not designed to stay up to speed with the innovation of the big beauty conglomerates that are creating new chemicals all the time,” Foley said.
For some newer, indie brands, avoiding possible water contamination is top of mind. When Laney Crowell was starting Saie, a clean makeup brand, she and her ingredient expert sat down to have a conversation about what “clean” would mean to the brand.
“She was helping me form our blacklist, she said, ‘what about the things that might not necessarily do harm to your body, but they never go away?” Crowell said. So the pair started looking into how ingredients can affect wildlife, and decided to ban more than 3,000 ingredients from Saie’s formulations. With backing from Unilever Ventures and others, Saie officially launched in November.
“The way we think about it — this is why we put so much time into our web site — even if nobody makes a purchase, at least they’re learning about what goes into our bodies and what goes into our waterways and affects the planet,” Crowell said.
According to experts, that type of full-circle thinking is typical of younger generations, and therefore, something beauty companies need to be paying attention to.
"The activist beauty consumers or the activist fashion shoppers are absolutely thinking about it," said Wendy Liebmann, chief executive officer of WSL Strategic Retail. "It's not Mom and Dad sitting around thinking about it, because we already messed it up — it's the kids, up to Millennials, who are now saying, 'these things are important.'"
That means that companies need to do thorough evaluations, not just ingredient swaps, Liebmann said. Against the backdrop of the wellness movement, customers are thinking about, "you make it, it comes from where, and where is it going when I stop using it?" she said.
In some instances, chemicals from beauty products have even gotten government attention.
One chemical in particular — 1,4 dioxane, which is not an ingredient used in beauty products, but rather caused from a chemical reaction from other ingredients like detergents, foaming agents, emulsifiers and solvents — has garnered some attention from both politicians and government groups.
The chemical is "likely carcinogenic to humans," according to the Environmental Protection Agency, but also quickly evaporates from skin, according to the Food & Drug administration. However, water contaminated with 1,4-dioxane may affect the liver and kidneys when consumed, according to the Agency for Toxic Substances & Disease Registry, a federal agency.
In 2017, New York senators Chuck Schumer and Kirsten Gillibrand called for the FDA to rid personal-care products of the substance after it was found in the Long Island, N.Y., water supply at 33 parts per billion. Alex Kowcz, chief scientist for the Personal Care Products Council, a beauty industry lobbying group, said that the organization supports the goal of 10 parts per million as a "safe level for consumers."
In response to Schumer and Gillibrand, the FDA said that in its tests, the levels of 1,4-dioxane had been going down: "Changes made in the manufacturing process have resulted in a significant decline over time in the levels of this contaminant in these products," an FDA site on 1,4-dioxane reads. The agency recommends manufacturers use a technique called "vacuum stripping" to reduce 1,4-dioxane, but did not address concerns around the chemical in water supplies, saying that it only regulates bottled water.
For more from WWD.com, see:
Behind IFF's $26 Billion Wellness Bet
Beauty's Found Generation X
Lawless Beauty Secures Investment From Cult Capital
Source: Read Full Article