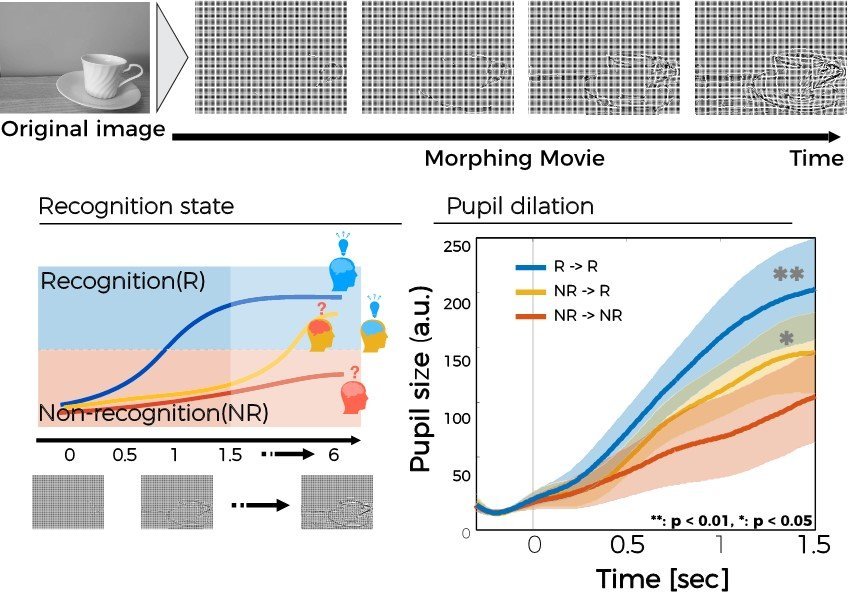 The Computer Science and Engineering Research Team at the Toyohashi University of Technology have taken pupil measurements of subjects who feel inspired by an object. The pupil dilates and narrows to adjust the amount of light entering the eye, and the extent of dilation/narrowing varies depending on the emotional state. In the present study, researchers measured the reaction of the pupil when a subject viewed a video made to elicit inspiration—specifically, a video in which an object gradually appears. Reactions at the moment of inspiration were compared to reactions when no inspiration occurred, and it was found that the extent of pupil dilation varies depending on whether or not a person is inspired by an object, and also that the pupil is already largely dilated at a previous stage. The results of the present study were published in the British scientific journal Scientific Reports on May 2.

Often referred to as an “a-ha moment” or a “Eureka moment,” people perceive inspiration as a momentary event. However, a previous study reported on changes in brain activity prior to being inspired during a quiz that asked for a common word based on multiple synonyms. The present study investigated this further by conducting an experiment under the hypothesis that memory retrieval, which involves inspiration in object understanding, occurs in association with pupil dilation. As a result, it was found that the pupils of the participants had dilated before they reported inspiration, which predicted inspiration thereafter. It is therefore believed that this discovery may lead to externally monitoring and controlling new strategies for memory retrieval in the future.

Lead author of the study and Ph.D. student Yuta Suzuki says, “Most of the time, we are not conscious of our brain’s activity. Perception and recognition are merely one part of total brain function, and there are many mysteries still left to solve with regard to this unconscious part of our brain that accounts for the majority of its activity. We decided to focus on people’s object recognition and were able to use biometry to monitor the processing that occurs before a person is aware they have recognized an object. Even more surprising is the fact that a participant’s confidence surrounding object recognition during a recognition task did not come into play. In other words, the pupil reacted regardless of whether the participant subjectively believed they were close to getting the answer, and we only tracked whether or not they answered that they recognized the object. We believe this suggests that successful memory retrieval of an object in subconscious processing is in fact reflected in pupil dilation.”

Research team leader and Associate Professor Tetsuto Minami says, “Up until now, we mainly researched ‘inspiration’ by measuring brain waves, but we can now expect new developments with combinations of different measuring techniques thanks to this new discovery using non-contact pupil measurement technology.”