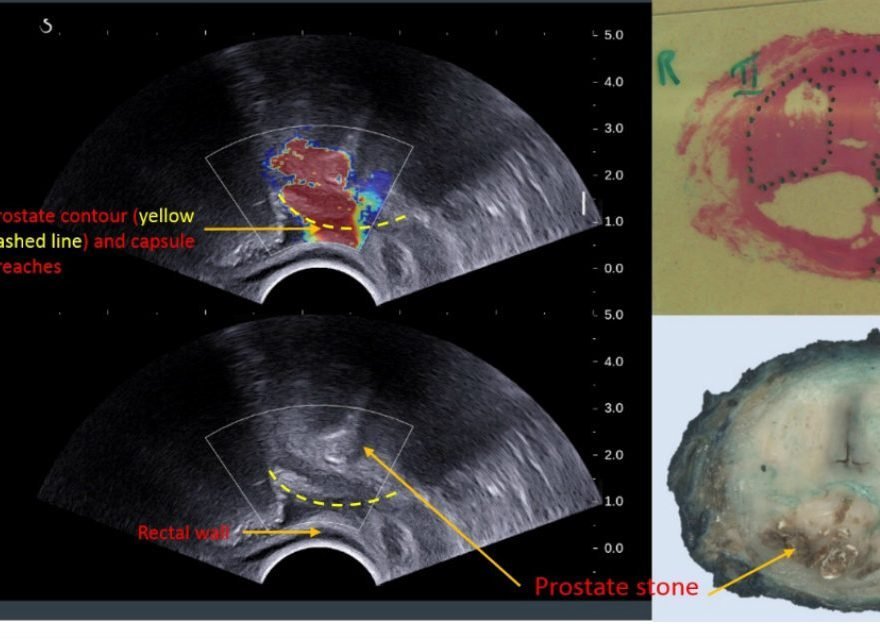 A new method offering more successful diagnosis and management of prostate cancer has been identified by researchers at the University of Dundee.

They say an ultrasound process called shear wave elastography (SWE) has been shown to offer much greater accuracy and reliability in diagnosis of prostate cancer, while being a non-invasive and cheaper method than those currently used.

Prostate cancer is the most common cancer in men in the UK, with over 47,000 new cases diagnosed every year. Recent high-profile cases include the University’s former Rector Stephen Fry.

Yet current methods of diagnosis and treatment are significantly flawed. The most commonly used tests for prostate cancer include the PSA blood test, a physical examination of the prostate (known as a digital rectal examination or DRE), MRI scans, and a biopsy.

Each carries significant problems. The PSA test are not offered as standard treatment and the results can be unreliable. The DRE is not good at identifying which cancers are benign and which need treatment. MRI scans are not available across the country and cannot always give a definitive answer. The biopsy is invasive, carries risk of infection and is expensive.

Ghulam Nabi, Professor of Surgical Uro-oncology at the University of Dundee and Lead for Prostate Cancer Surgery with NHS Tayside, said, “Prostate cancer is one of the most difficult to pinpoint. We are still in a position where our diagnosis of prostate cancer is extremely inefficient, leading to unnecessary treatments for many patients.

“The new method we have developed shows we can achieve much greater levels of diagnosis, including identifying the difference between cancerous and benign tissue without the need for invasive surgery.”

The results of the Dundee research are published in the Journal of Urology. The project was funded by Prostate Cancer UK with support from the Movember Foundation.

News of the research has been welcomed by Stephen Fry, a former Rector of the University who recently revealed he had undergone surgery for prostate cancer.

Stephen said, “As a proud honorary doctor and one time Rector of Dundee University as well as a recent survivor of prostate cancer, it is doubly, triply exciting to hear of the new techniques in diagnostic imaging that have been going on at the famed University of Dundee Medical School.

“Anyone who has been in my position will know that when it comes to this pernicious disease early screening and diagnosis is the absolute key to a successful outcome. The news of this breakthrough comes at a time when prostate cancer is being pushed to the forefront of our consciousness in the UK, not least because of the disturbing upward trend in its prevalence. So hurrah for Dundee University and Medical School and a huge thank you to Professor Nabi and his team for their work in developing this new weapon in the war against a deadly killer.”

The method developed by Professor Nabi and colleagues involves targeting the prostate with ultrasound. Cancerous tissue is stiffer than normal tissue, so when the shear waves are slowed as they pass through it. This effect can be measured and used to develop images of the cancerous area, with a definition and accuracy that outstrips other scanning methods such as MRI.

The technology was able to detect 89 per cent of prostate cancers and could identify more aggressive cancers and those beginning to spread outside the prostate.

“We have been able to show a stark difference in results between existing techniques such as MRI and SWE,” said Professor Nabi. “We have had cases where the SWE technique has picked up cancers which MRI did not reveal.

“It is like someone has turned the lights on in a darkened room. We can now see with much greater accuracy what tissue is cancerous, where it is and what level of treatment it needs.

“This is a significant step forward in detection and management of prostate cancer. Our study was localised here in Dundee and involved around 200 patients. We really need to see this looked at on a wider scale to build more data but there is clearly the potential to really change the way we manage prostate cancer.”

SWE technology is already used in breast cancer and liver diseases. To make it applicable to prostate cancer a special probe had to be developed.

Cheng Wei, a postdoctoral researcher who worked on the project with Professor Nabi and colleagues, said, “The technology is now available which allows us to apply SWE imaging to prostate cancer, with very impressive results.”

Simon Grieveson, Head of Research Funding at Prostate Cancer UK, said, “With one man dying every 45 minutes from prostate cancer in the UK, the need for a more reliable test which can identify dangerous forms of the disease earlier is greater than ever.

“This research has shown the potential of a novel form of ultrasound called shear wave elastography in detecting clinically significant prostate cancer. If proven to be effective, this could lead to a more accurate and cost effective option than current diagnostic tests. This promising new technique now needs to be tested in a much larger number of men to confirm just how well it can detect the aggressive cancers, whilst also ruling out those who do not have prostate cancer. We look forward to further results in this area.”