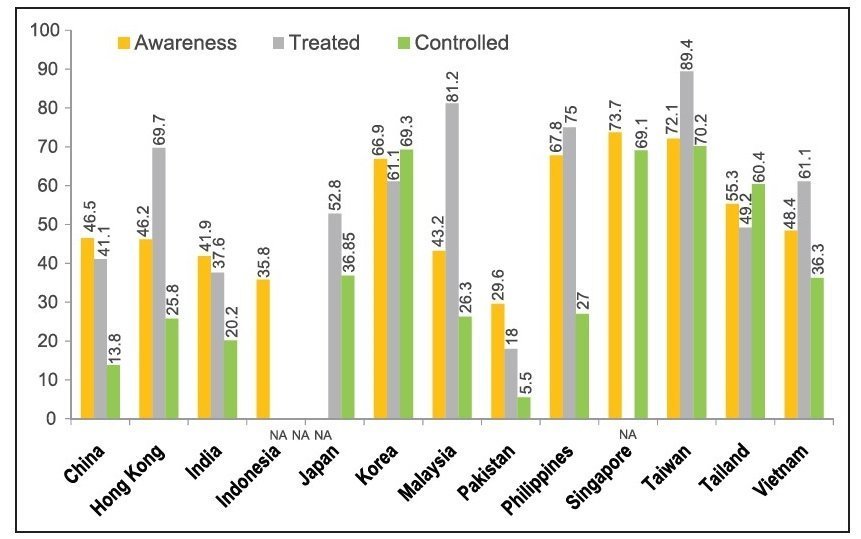 The reality of treating high blood pressure in the world’s most populated continent is trickier these days, experts say. After guidelines recently lowered the threshold for high blood pressure, about half of adults living in Asia now have the chronic condition.

That’s why a group of Asian doctors has come together to study the effects of high blood pressure and implement culturally specific education programs that can increase awareness of hypertension and its relationship to cardiovascular disease throughout Asia. It’s called the HOPE Asia Network, short for Hypertension Cardiovascular Outcome and Prevalence Evidence in Asia.

Researchers are studying ways to improve the management of hypertension in Asia, where the link between high blood pressure and cardiovascular disease is stronger than it is in Western countries, according to a commentary published last month in Hypertension.

The commentary’s coauthors, Dr. Jiguang Wang and Dr. Kazuomi Kario, said lack of health insurance, inability to access care, poor adherence to prescribed medications, and the use of herbs as medicines are significant barriers to diagnosing and managing hypertension throughout the region.

As a result, “hypertension is often diagnosed late in many hypertensive patients,” said Wang, director of the Shanghai Institute of Hypertension. Even when it is diagnosed, because high blood pressure causes no symptoms, many don’t perceive the condition as serious, he said.

Nearly 4 billion people live in Asia. Studies show rates of awareness, treatment and control of high blood pressure are generally low in Asia, vary widely among individual countries, and are impacted by regional, economic and cultural differences. In China, for example, 47 percent of people are aware of their blood pressure, and 14 percent had their hypertension controlled, compared with 74 percent awareness and 69 percent control rate in Singapore.

Lifestyle factors, including diet and stress, may be behind the high hypertension rates in Asia, the researchers said. One common problem is high salt intake. Asians not only tend to have diets high in sodium, but they are genetically more sensitive to sodium.

“If we want to bring the number of cardiovascular events to zero, we need a better approach that is not just medicine,” said Kario, chairman of the Division of Cardiovascular Medicine at Jichi Medical University School of Medicine in Tochigi, Japan, and chairman of the HOPE Asia Network. He noted that lifestyle changes and the use of technology and telemedicine could help Asian patients better control their blood pressure round-the-clock, especially during the crucial morning hours when Asian patients are more likely than Westerners to experience a surge in blood pressure.

The researchers stressed the need to standardize hypertension treatment in Asia. Doing so could more immediately address treatment gaps, given the wide disparities in practice and health care delivery, Kario and Wang wrote.

Yet in doing so, doctors must not overlook young people, Wang said.

“The prevalence of obesity and hypertension in the young is increasing rapidly in the past years,” he said. “If we would not control hypertension, stroke incidence will remain high in Asians in the decades to come.” Unlike in the United States, stroke is more common among Asians than coronary artery disease.

Dr. Daniel Lackland, president of the World Hypertension League, said, “The earlier you do something to lower blood pressure that’s too high, the more likely you are to prevent a stroke or heart attack.” Lackland, a professor of epidemiology and neurology and Medical University of South Carolina, was not involved in the recent commentary.