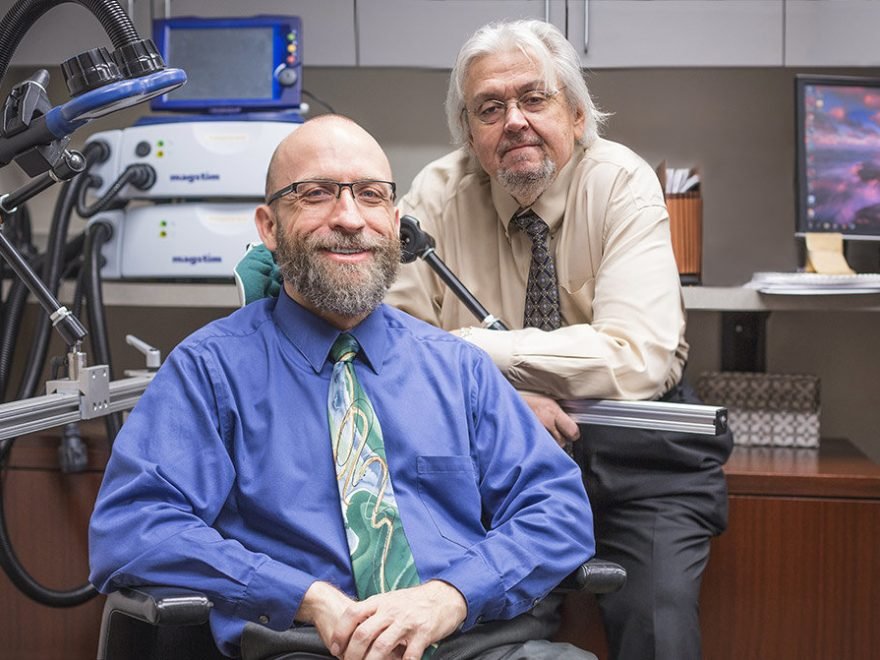 Researchers from The University of Texas at Dallas have found that a standard therapy for post-traumatic stress disorder (PTSD) is more effective when paired with transcranial magnetic stimulation of the brain.

Dr. John Hart Jr., Dr. Michael Motes and a team of researchers examined whether the effectiveness of cognitive processing therapy (CPT) in treating PTSD could be boosted by adding repetitive transcranial magnetic stimulation (rTMS) just prior to the CPT sessions.

The results, published in the Journal of Affective Disorders, showed significantly greater reductions in PTSD symptoms in the group receiving rTMS before CPT compared to a control group that received only CPT. Additionally, for the group that received rTMS before the therapy, PTSD symptoms remained reduced when the participants were reassessed three and six months afterward.

Repetitive transcranial magnetic stimulation uses a magnetic coil to stimulate targeted areas the brain. In this study, the researchers targeted an area on the front right side of the brain known as the prefrontal cortex.

Hart, the Distinguished Chair in Neuroscience in the School of Behavioral and Brain Sciences (BBS), said that rTMS is approved by the Food and Drug Administration to treat severe depression, and studies involving its use for PTSD have been conducted for about 15 years.

“What was novel about our study was that we weren’t using rTMS as a treatment on its own,” Hart said. “We were using it to enhance the effects of cognitive processing therapy, which we know works. We wanted to test whether we could make CPT more effective by adding the targeted rTMS.”

Cognitive processing therapy is a version of cognitive behavioral therapy developed specifically to treat PTSD. Motes, a senior research scientist in BBS, said that CPT helps reduce its three core symptoms: hyperarousal, or feeling like you are “on alert” all the time; re-experiencing the traumatic events as nightmares, recurring thoughts or imaginations; and avoidance—changing or wanting to change your life to avoid thinking about the events.

“CPT helps people to understand the symptoms of PTSD, the causes and consequences, and how to deal with them,” he said. “CPT also gives you tools to avoid feeling overwhelmed, so you don’t lose your ability to function. It has been well vetted through research over the years. It is also standardized, so it is ideal for studies like this.”

Motes said that their new work amplified the successes of an already strong therapy.

“CPT alone is very effective—the results of the group that didn’t receive rTMS confirm that,” he said. “But by adding rTMS, we saw increases in the reduction of PTSD symptoms within five weeks of therapy, and the added benefit of rTMS was still present when we tested the participants six months after they had finished therapy. These reductions were in both our participants’ self-reported ratings of their symptoms and in the clinicians’ evaluations.”

The study also provided brain-imaging data that researchers hope will increase the understanding of how rTMS and CPT work.

“We did EEGs (electroencephalograms), fMRI (functional magnetic resonance imaging) and other measures before and after treatment,” Hart said. “We’re looking at all that data now to learn what physiological changes took place in those who got the rTMS and CPT versus CPT alone.”

Motes said that CPT’s manualization—how the therapy works from a template to ensure uniformity—provides a crucial consistency across treatment centers to give researchers reliable data in studies like this.

“It is an effective therapy with activities that target specific therapeutic outcomes,” he said. “It can be administered fairly consistently by different therapists, which makes it ideal for treatment consistency and for research.”

Because previous studies have tested rTMS for depression, the technique is becoming more accessible in clinics and hospitals, Hart said.

“It’s no longer the case that only specialty centers have this equipment,” he said. “Federal settings have them too, in places such as Veterans Health Administration facilities. It’s not a difficult service to find.”

Even as treatments evolve, persuading those with PTSD to seek treatment can be challenging due to misunderstandings and stigmas surrounding the disorder, Hart said.