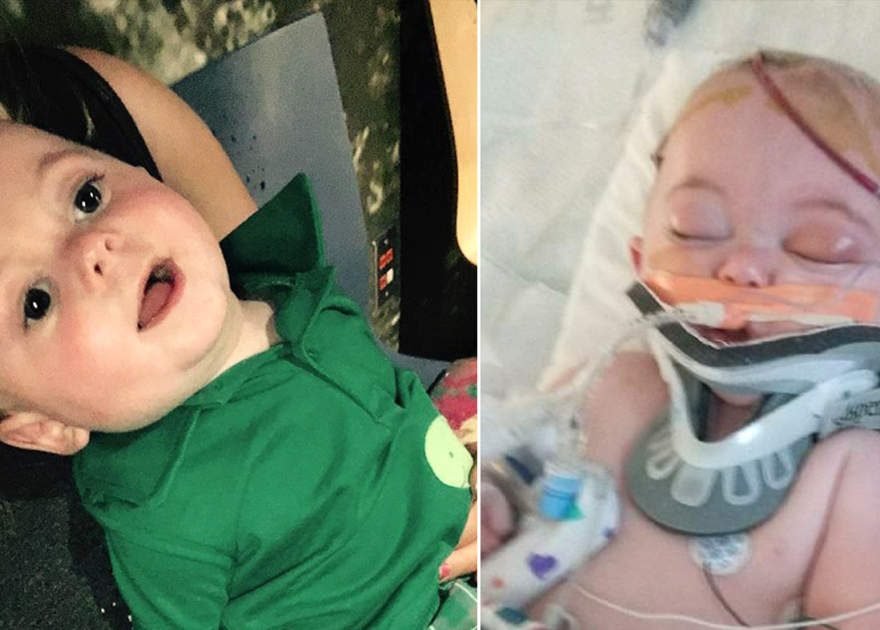 Paige Ferguson, 26, and her fiancé, 31-year-old Blake Linton, were hanging out with friends in their Trumann, Arkansas, hometown on March 17 when they heard a loud thud.

Moments earlier, Ferguson had laid her infant son, Colton, down on a queen-sized bed just two feet off of the floor in a nearby bedroom. The new mom says she knew the thump was the sound of Colton hitting the floor.

“He started to cry immediately. I’ve never seen his dad move that fast ever. Blake dropped everything and ran into the room to get him,” Ferguson recalls. “On the side of his head there was a bump… Colton is my first baby, so I’m a paranoid first-time mom and I wanted to get him checked out just to be sure.”

The concerned parents rushed Colton to the hospital, and Ferguson says the little boy smiled and cooed the entire ride. So, Ferguson and Clinton were surprised when a CT scan showed that the baby had a fractured skull.

“I remember putting my head down on the bed and I was just crying and crying. I couldn’t fathom the idea of something seemingly so minor causing such damage,” she tells PEOPLE. “I couldn’t hold it together. I will never lie and say that I was strong in that moment. I really wasn’t. I kept hugging Blake and saying, ‘I’m sorry.’ ”

Colton was taken by helicopter to Le Bonheur Children’s Hospital in Memphis, Tennessee. There he underwent emergency brain surgery and went into cardiac arrest for nearly 10 minutes, Ferguson tells PEOPLE.

“They didn’t think he would live at all. I walked into the ICU after his surgery and the doctor came up to me. Her exact words were, ‘Ma’am, I need you to understand that most likely your son is going to die from this,’ ” she recalls through tears.

Adds Ferguson, “I was in disbelief. I still am. I just kept praying, and praying. I couldn’t wrap my head around it. It felt like I was in a horrible dream. Like, this can’t be real.”

Colton remained in the hospital for a month, where he underwent another brain surgery and more than a dozen blood transfusions. Then, much to the surprise of the medical staff, Colton was well enough to return home.

“It was amazing. Colton was a miracle. At all of our follow-up appointments, the doctors have said, ‘I’m not trying to be mean, but your child should be dead. People do not live through the injury he had. He is absolutely a miracle,’ ” Ferguson recalls.

“I really give all the glory to God for everything that Colton does now and will continue to do.”

Although Colton survived the injury, Ferguson says he suffered severe damage to his brain, the lasting effects clear.

“He’s very different. He’s not the same Colton that he was before. Even right before his accident he was constantly babbling at us, not he doesn’t talk,” she tells PEOPLE. “He doesn’t babble anymore. He’s irritable all the time. He’s very stiff. I could be holding him, and I miss him so much.”

As a result of the incident, Colton developed severe epilepsy and takes seizure medications, Ferguson says, adding that the baby also uses a feeding tube. She says doctors expect Colton to have cerebral palsy when he is older and he’ll have trouble walking and talking.

“He’s the strongest child I’ve ever seen in my entire life. Because of the cardiac arrest, Colton’s entire brain was affected,” Ferguson says. “I will do everything in my power to ensure he has a happy life. I really think he’s going to do more than what [the doctors] think he will. But I’m also very fearful for his future.”

The family has set up a GoFundMe page to cover Colton’s medical expenses.