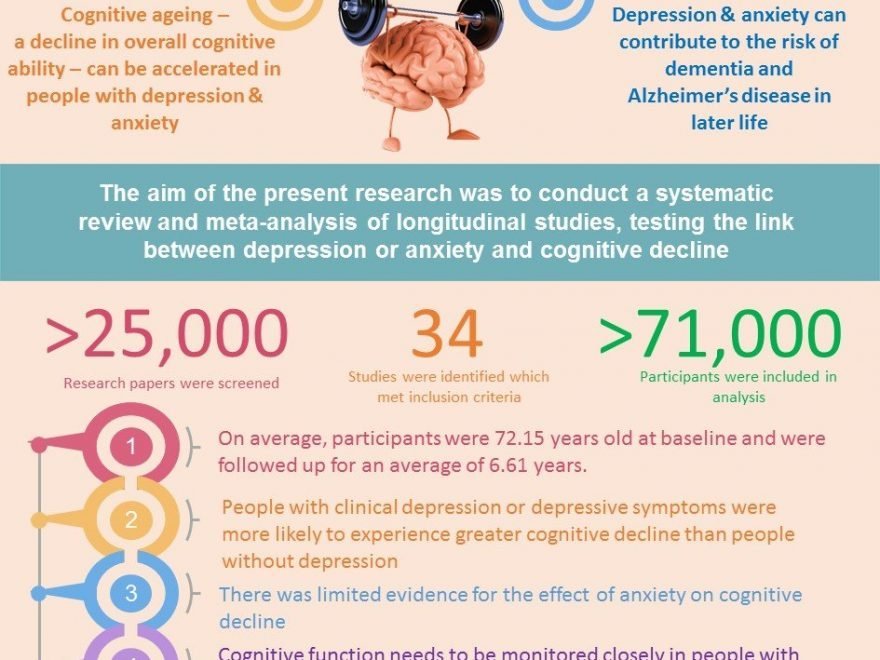 Psychologists at the University of Sussex have found a link between depression and an acceleration of the rate at which the brain ages. Although scientists have previously reported that people with depression or anxiety have an increased risk of dementia in later life, this is the first study that provides comprehensive evidence for the effect of depression on decline in overall cognitive function (also referred to as cognitive state), in a general population.

For the study, published today, Thursday 24 May 2018, in the journal Psychological Medicine, researchers conducted a robust systematic review of 34 longitudinal studies, with the focus on the link between depression or anxiety and decline in cognitive function over time. Evidence from more than 71,000 participants was combined and reviewed. Including people who presented with symptoms of depression as well as those that were diagnosed as clinically depressed, the study looked at the rate of decline of overall cognitive state—encompassing memory loss, executive function (such as decision making) and information processing speed—in older adults.

Importantly, any studies of participants who were diagnosed with dementia at the start of study were excluded from the analysis. This was done in order to assess more broadly the impact of depression on cognitive ageing in the general population. The study found that people with depression experienced a greater decline in cognitive state in older adulthood than those without depression. As there is a long pre-clinical period of several decades before dementia may be diagnosed, the findings are important for early interventions as currently there is no cure for the disease.

Lead authors of the paper, Dr. Darya Gaysina and Amber John from the EDGE (Environment, Development, Genetics and Epigenetics in Psychology and Psychiatry) Lab at the University of Sussex, are calling for greater awareness of the importance of supporting mental health to protect brain health in later life.

Dr. Gaysina, a Lecturer in Psychology and EDGE Lab Lead, comments: “This study is of great importance—our populations are ageing at a rapid rate and the number of people living with decreasing cognitive abilities and dementia is expected to grow substantially over the next thirty years.

“Our findings should give the government even more reason to take mental health issues seriously and to ensure that health provisions are properly resourced. We need to protect the mental wellbeing of our older adults and to provide robust support services to those experiencing depression and anxiety in order to safeguard brain function in later life.”