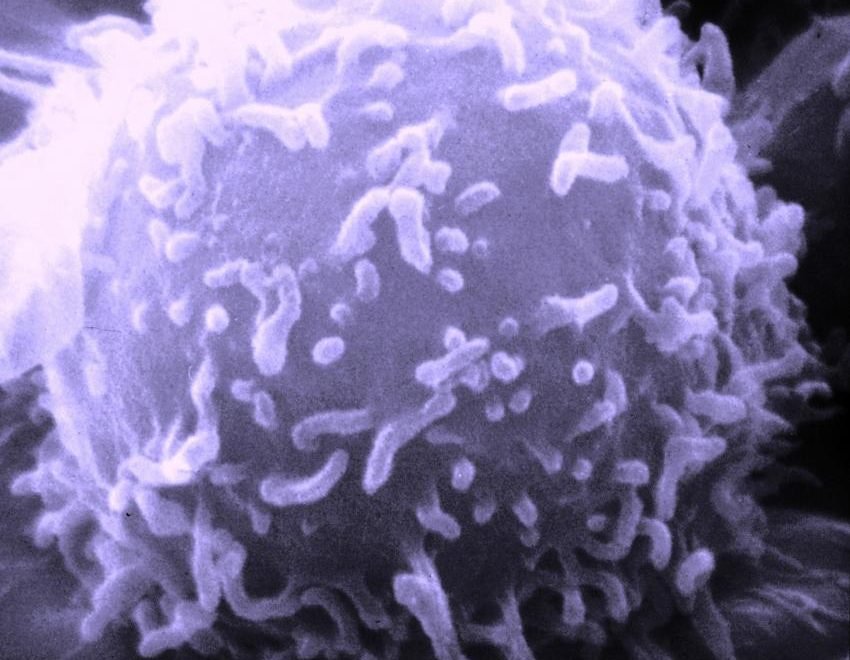 Anyone who’s taken a bite of a sandwich with too much spicy mustard or a piece of sushi with too much wasabi can attest to the tear-inducing sensation these condiments can cause. These loud warnings to the nervous system of exposure to potentially harmful chemicals are triggered by TRPA1, a calcium channel protein sometimes referred to as the “wasabi receptor.”

Found primarily in sensory neurons, TRPA1 is a sensor for environmental irritants and has been widely studied for its roles in detecting sensations such as pain and cold, and in airway inflammation conditions such as asthma.

Certain cancers express unusually high levels of TRPA1, particularly lung and breast cancers, but why they do so has thus far remained unclear.

“This was quite an unexpected finding. Tumor cells appear to have co-opted this neural protein channel, which is associated with multiple types of cancer, to protect themselves against oxidative stress,” said senior study author Joan Brugge, the Louise Foote Pfeiffer Professor of Cell Biology at HMS.

The team’s analyses revealed that TRPA1 allows cancer cells to tolerate elevated ROS by inhibiting programmed self-destruction, which severely damaged or stressed cells normally undergo. They found that TRPA1 expression is regulated by a cellular pathway that also produces antioxidant compounds that neutralize ROS. Antioxidants and TRPA1 appear to complement each other to increase tumor survival, according to the authors.

Experiments that blocked TRPA1 activity in mice curbed tumor growth and made cancer cells more vulnerable to chemotherapy. Drugs that target TRPA1 are being developed, with some entering clinical trials, for a variety of conditions, including asthma and pain, Brugge pointed out.

“Our results suggest that TRPA1 could be a promising target for new treatments against cancer as well,” said Brugge, who is co-director of the Harvard Ludwig Cancer Center.

Virtually every cell uses oxygen to power the metabolic processes necessary for life, but metabolism also generates ROS, oxygen-based chemicals that are highly reactive and potentially harmful to cellular structures.

ROS must be carefully managed to prevent cell damage or death. This is especially important for cancer cells, which accumulate large amounts of ROS as they multiply and metastasize beyond control.

Previous work by Nobuaki Takahashi, HMS instructor in cell biology in the Brugge laboratory, and colleagues showed that ROS can activate TRPA1 in neurons.

To investigate this connection in cancer, Brugge, Takahashi and colleagues grew human breast and lung cancer cells under laboratory conditions into 3-D spheroids that mimic a tumor’s natural structure.

They found that ROS levels were substantially higher inside the spheroids compared to the surface, but this disparity had little effect on cell survival.

When TRPA1 was blocked, however, cancer cells in the interior of the spheroids began to die and were cleared within a few days.

The team’s analyses revealed that an influx of calcium ions through TRPA1 triggers a cascade of cellular signals that suppress programmed cell death. They found that TRPA1 expression is induced by NRF2, a transcription factor that controls the production of antioxidants.

When exposed to high levels of ROS, cancer cells appear to rely on NRF2 to activate antioxidant production and to prevent programmed cell death through TRPA1, the authors said.

“The cellular program that increases production of antioxidants also simultaneously activates this unique TRPA1-dependent defense mechanism, which allows cancer cells to tolerate enhanced levels of ROS,” said Takahashi, who is lead author on the study. “These two very different pathways work together to help tumors survive and adapt to oxidative stress.”

Because of its central role in pain sensation and asthma, numerous research efforts and clinical trials are underway to develop small molecules that can safely and effectively inhibit TRPA1 activity. Taken together, the results show that TRPA1 could be an enticing target for therapies against cancer, the researchers said.

“In lung cancer, for example, radiation is an important primary therapy that kills cancer cells by flooding them with ROS,” Brugge said. “But cancer cells expressing TRPA1 may be able to tolerate radiotherapy better.”

“Inhibiting TRPA1 activity and decreasing this buffering ability might make TRPA1-positive tumors more vulnerable to radiation,” she added. “We think this could be a possible first-use scenario, if indeed good TRPA1 inhibitors are developed.”

The study findings also add to a growing body of evidence that defense against oxidative stress is important to cancer progression.

Previous research by Brugge’s lab was among the first to show that antioxidants help cancer cells survive high ROS conditions, particularly when cells travel away from the original tumor site, as is the case with metastases.

Subsequent studies in cell and animal models have supported this observation. In humans, large-scale clinical trials of antioxidant dietary supplements have not found evidence that supplements are beneficial for cancer, and in some cases have suggested that their use may worsen outcomes.

Further research is needed to better understand the effects of dietary antioxidants in cancer patients, the authors said, and the National Cancer Institute recommends that such supplements be used with caution.

Brugge and colleagues are now further investigating the biological underpinnings of TRPA1 activity in cancer and its role in defending against ROS.