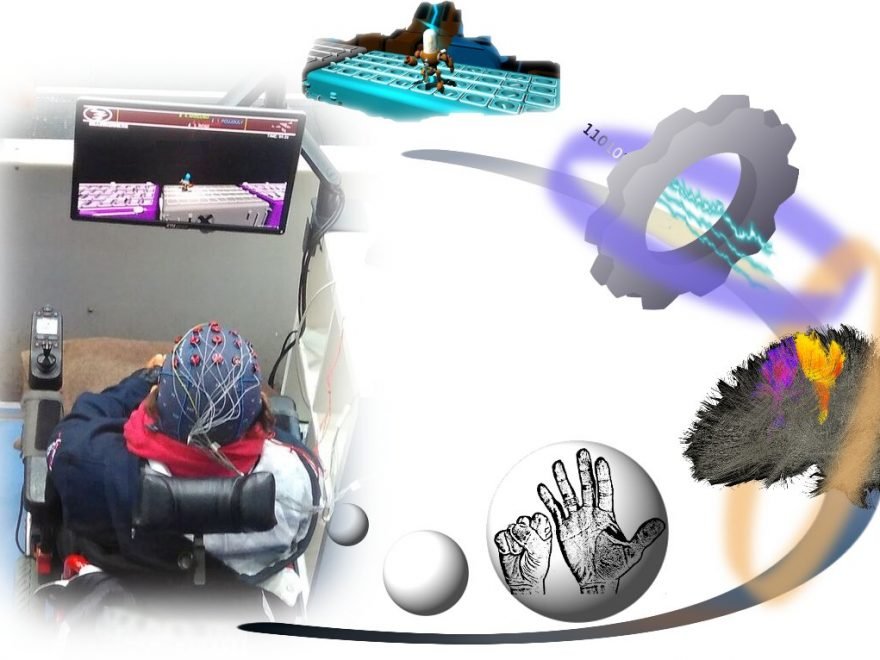 Brain-computer interfaces (BCIs) are seen as a potential means by which severely physically impaired individuals can regain control of their environment, but establishing such an interface is not trivial. A study publishing May 10 in the open access journal PLOS Biology, by a group of researchers at the École Polytechnique Fédérale de Lausanne in Geneva, Switzerland, suggests that letting humans adapt to machines improves their performance on a brain-computer interface. The study of tetraplegic subjects training to compete in the Cybathlon avatar race suggests that the most dramatic improvements in computer-augmented performance are likely to occur when both human and machine are allowed to learn.

BCIs, which use the electrical activity in the brain to control an object, have seen growing use in people with high spinal cord injuries, for communication (by controlling a keyboard), mobility (by controlling a powered wheelchair), and daily activities (by controlling a mechanical arm or other robotic device).

Typically, the electrical activity is detected at one or more points of the surface of the skull, using non-invasive electroencephalographic electrodes, and fed through a computer program that, over time, improves its responsiveness and accuracy through learning.

As machine learning algorithms have become both faster and more powerful, researchers have largely focused on increasing decoding performance by identifying optimal pattern recognition algorithms. The authors hypothesized that performance could be improved if the operator and the machine both engaged in learning their mutual task.

To test this hypothesis, the authors enlisted two subjects, both tetraplegic adult men, for training with a BCI system designed to detect multiple brain wave patterns. Training took place over several months, culminating in an international competition, called the Cybathlon, in which they competed against ten other teams. “Each participant controlled an on-screen avatar in a multi-part race, requiring mastery of separate commands for spinning, jumping, sliding, and walking without stumbling. The two subjects marked the best three times overall in the competition, one of them winning the gold medal and the other holding the tournament record

Electroencephalography recording of the subjects during their training indicated they adapted normal brain wave patterns related to imagined movements, called sensorimotor rhythms, to control the avatar, and that these patterns became stronger over time, indicating that the subjects were learning how to better control the BCI during the training. While some degree of learning likely takes place with even the simplest BCIs, the authors believe they have maximized the chances for human learning by infrequent recalibration of the computer, leaving time for the human to better learn how to control the sensorimotor rhythms that would most efficiently evoke the desired avatar movement. Training in preparation for a competition may also contribute to faster learning, the authors propose.