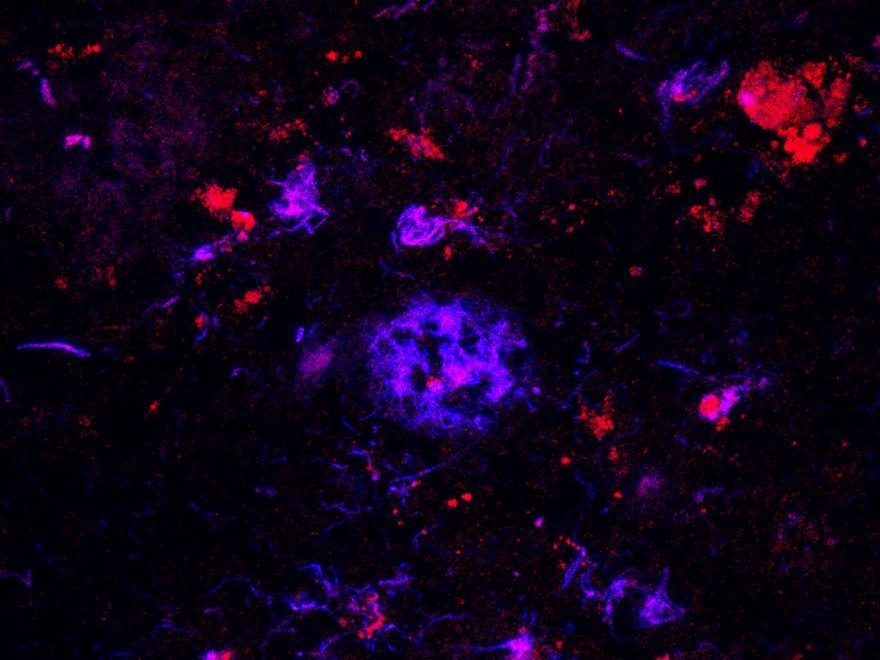 Years before people start showing characteristic symptoms of Alzheimer’s disease, sticky plaques begin forming in their brains, damaging nearby cells. For decades, doctors have sought ways to clear out these plaques as a way to prevent or treat the disease.

The sticky clumps, known as amyloid plaques, are composed primarily of a brain protein called amyloid beta. But nestled within the plaques are small amounts of another Alzheimer’s protein: APOE. Now, researchers at Washington University School of Medicine have shown that an antibody not only targets APOE for removal but sweeps away plaques.

The findings, available March 26 in the Journal of Clinical Investigation, could lead to a way to halt the brain damage triggered by amyloid plaques while the disease is still in its early stages, perhaps before symptoms appear.

“Many people build up amyloid over many years, and the brain just can’t get rid of it,” said senior author David Holtzman, MD, the Andrew B. and Gretchen P. Jones Professor and head of the Department of Neurology. “By removing plaques, if we start early enough, we may be able to stop the changes to the brain that result in forgetfulness, confusion and cognitive decline.”

Variants of the gene APOE are the single largest risk factor for Alzheimer’s disease. In earlier work, Holtzman and colleagues have shown that a DNA-based compound that targets APOE can lessen the injury caused by amyloid plaques.

But getting rid of the plaques likely would protect the brain better than blunting the plaques’ destructiveness. To find out whether the plaques could be removed, Holtzman, co-first authors Fan Liao, PhD, a postdoctoral researcher, and Aimin Li, PhD, a senior scientist, and colleagues focused on antibodies that recognize and bind to APOE. Once antibodies attach themselves to their APOE target, they attract the attention of roving immune cells, which carry both antibody and target off to be destroyed. The researchers reasoned that nearby amyloid might be cleared away along with APOE.

The researchers tested several antibodies that recognize human APOE in mice genetically predisposed to develop amyloid plaques. The APOE genes of the mice had been replaced with a human APOE gene. The antibodies were developed in collaboration with Denali Therapeutics.

For six weeks, the mice were given weekly injections of placebo or antibodies against APOE. Then, the researchers measured the amount of plaques in their brains. One antibody – called HAE-4 – cut the level of plaques by half.

Moreover, HAE-4 had no effect on APOE levels in the blood. APOE plays an important role in transporting fats and cholesterol in the body, so removing it from the bloodstream could create unwanted side effects. The failure of the antibody to lower levels of APOE in the blood was therefore a good sign. But it was also a mystery. Why did the antibody clear APOE from the brain but not the blood?

“It turns out that the APOE in the plaques has a different structure than the form of APOE found in the blood,” Holtzman said. “The HAE-4 antibody recognized only the form found attached to the plaques in the brain.”

No treatment exists to prevent or delay onset – or slow the trajectory – of Alzheimer’s disease. But a few antibodies that clear plaques by targeting amyloid beta are being evaluated in clinical trials. While such antibodies are promising, they sometimes come with the side effect of inflammation and swelling in the brain.

However, antibodies that target APOE may be successful at removing plaques in people and somewhat less likely to trigger a destructive immune response, Holtzman said.

“The anti-amyloid antibodies are going to be binding to most of the molecules that are in the plaque, but the anti-APOE antibody would target just a very small component of the plaque,” Holtzman said. “This means we may find less immune activation, and we might not see the unwelcome side effects.”

The researchers are planning further studies to determine whether similar antibodies are safe and might be effective enough to be used in people.