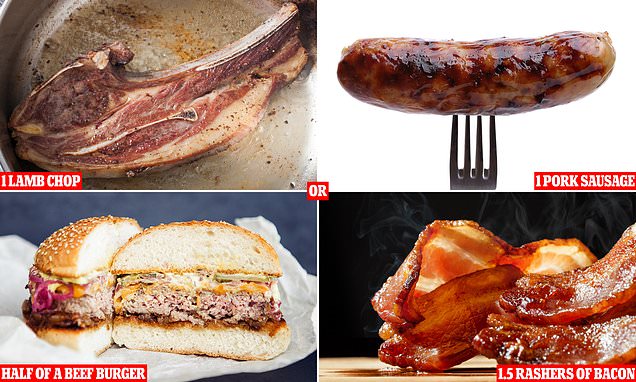 You DON’T need to cut out red meat: Scientists say official advice on eating less beef, pork and lamb is based on bad evidence and having it four times a week poses ‘NO cancer risk’

There is no reason to cut back on red meat for health reasons, according to a controversial claim by a group of leading scientists.

Researchers in Canada, Spain and Poland have cast a shadow over eating advice adopted by health organisations around the world.

In a landmark paper, the academics analysed past studies of how eating meat affected the health of more than four million people.

They found no evidence that eating beef, pork and lamb could increase the rates of heart disease, cancer, stroke or type 2 diabetes – despite fears.

And the team also said they found nothing strong enough to signal that people should cut down on red meat, adding that the quality of evidence was too low for findings to be concerning.

Officials have for years tried to encourage diet changes – the NHS suggests people limit themselves to 70g of red meat a day, about 1.5 rashers of bacon.

Scientists in the UK are torn over the research, describing it as ‘very good quality’ but hesitating to agree with telling people to cut back on meat. 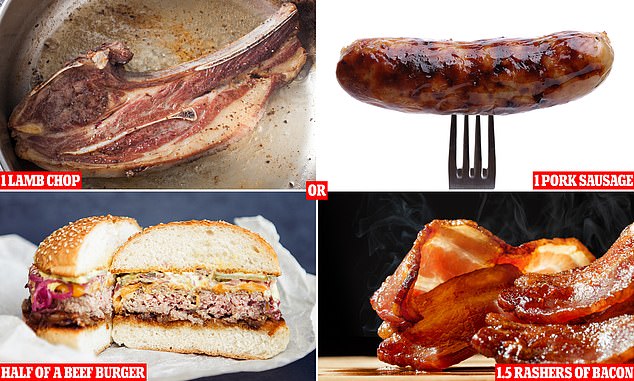 The NHS recommends people limit themselves to 70g or less of red meat each day, because eating a lot of it ‘probably increases your risk of bowel cancer’. 70g works out equal to about one lamb chop, one pork sausage, half a beef burger, or one-and-a-half rashers of bacon

The study was a series of five reviews of past research, carried out by scientists from the Dalhousie and McMaster universities in Canada as well as the Cochrane research centres in Spain and Poland.

It considered 61 studies which had monitored the health of more than four million people, as well as 12 which trialled changing the diets of about 54,000.

The team found the results of past research were of too poor a quality to make any suggestions about the way people lived their lives.

As a result, a panel of 14 experts from seven countries said people should continue to eat the current average amount of red meat.

This was between three and four portions per week for North Americans and Europeans, they said.

In an editorial published alongside the papers, Dr Aaron Carroll and Dr Tiffany Doherty, from Indiana University, wrote: ‘The overall recommendations, contrary to almost all others that exist, suggested that adults continue to eat their current levels of red and processed meat, unless they felt inclined to change them themselves.

‘This is sure to be controversial, but it is based on the most comprehensive review of the evidence to date.

‘Because that review is inclusive, those who seek to dispute it will be hard pressed to find appropriate evidence with which to build an argument.’

WHAT ARE THE RISKS OF EATING TOO MUCH RED MEAT?

Red meat – such as beef, lamb and pork – and processed meat – like bacon, sausages and charcuterie – have been linked to health complications.

The NHS therefore recommends adults reduce their intake to 70g a day and do not exceed 90g.

The American Institute for Cancer Research advises we consume no more than three portions of red meat a week.

It also urges us to ‘avoid’ processed meats.

Processed meat often contains nitrogen-based preservatives that stop it going off while being transported or stored.

These preservatives have been linked to both bowel and stomach cancer.

When red meat is digested, the pigment haem gets broken down in our gut to form chemicals called N-nitroso compounds.

These compounds have been found to damage the DNA of cells that line our digestive tract, which could trigger cancer.

Our body may also react to this damage by making cells divide more rapidly to replace those that are lost.

This ‘extra’ cell division may increase the risk of cancer.

Red and processed meat has also been linked to type 2 diabetes.

This may be due to the preservatives used or the meats’ higher levels of saturated fat than chicken and fish.

The Indiana researchers even suggested scientists should stop doing studies trying to work out the effects of meat simply by watching people.

The reason the previous results were so weak, they said, was that studies were so vague there was no way of proving a direct link between meat and health.

Experts are divided on whether to agree with the paper or to err on the side of caution.

Professor Tim Key, from the University of Oxford, said: ‘There’s substantial evidence that processed meat can cause bowel cancer – so much so that the World Health Organization has classified it as carcinogenic since 2015.

‘Recent estimates suggest over 5,000 people in the UK develop bowel cancer due to the consumption of processed meat each year, which is why the government recommends that people keep their total intake of red and processed meat to no more than about 70g per day.’

This amount – 70g – works out equal to about one lamb chop, one pork sausage, half a beef burger, or one-and-a-half rashers of bacon.

Dr David Nunan, also a professor at Oxford, said: ‘A recommendation to reduce consumption will at best move more people to the average.

‘And if that also means some move from average to below average this is unlikely, for most, to lead to harm in terms of health outcomes.

‘But again, that is if we believe the findings, which the authors of the current studies put little belief in.

‘All this says nothing about individual risk, as even if we believe that at best 12 out of 1,000 people who consume slightly less red or processed meat will be saved from a bad health outcome, no one can ever predict if you will be one of those 12.’

The NHS says eating a lot of red meat ‘probably increases your risk of bowel cancer’.

Cancer Research UK says three chemicals in meat are linked to bowel cancer because they damage cells in the gut.

Dr Giota Mitrou, director of research at the World Cancer Research Fund, said: ‘It is important to remember that consumption of red and processed meat is one component of our overall diet and exercise pattern and it’s unlikely that specific foods are important single factors in causing or protecting against cancer.

‘Instead, different patterns of diet and physical activity throughout life combine to make you more or less susceptible to cancer.’

Dr Marco Springmann, an environment and health expert at Oxford, added: ‘The recommendation that adults continue current red and processed meat consumption is based on a skewed reading and presentation of the scientific evidence.

‘Even with this skewed way of presenting the evidence, the reviews clearly indicate the benefits of reducing red and processed meat consumption.’

The research was published in the journal Annals of Internal Medicine.

WHAT DID HEALTH CHARITIES SAY ABOUT THE RESEARCH?

‘We know that eating red and processed meat can increase your likelihood of developing bowel cancer.’

So it’s important to cut down how much of this you’re having. You don’t need to cut these foods out entirely, just to choose red and processed meat as an occasionally rather than every day.

‘Nearly 42,000 people are diagnosed with bowel cancer every year and it’s the fourth most common cancer in the UK. Making simple changes to your lifestyle, like cutting out red and processed meat, can help stack the odds against bowel cancer.

‘It’s also important to try and be of a healthy weight, cut down on alcohol, exercise regularly and stop smoking, doing all these things can make a real difference.’

‘This research came to the same conclusion, the main difference being the researchers’ view that eating less meat doesn’t help very much.

‘But this is different to what many other researchers and experts say – that if people ate less processed meat in the UK alone, it could prevent around 5,400 cases of bowel cancer every year.

‘We don’t recommend people cut out meat altogether if they don’t want to, but anyone who eats a lot of it and wants to reduce their risk of bowel cancer may wish to think about cutting down.’

Tracy Parker, senior dietitian at the British Heart Foundation, added: ‘Studies like this make it confusing to know if you should pick up your steak knife or leave it in the drawer.

‘How much red and processed meat we should be eating has been up for debate for decades, but our advice hasn’t changed.

‘Most of us could benefit from eating less meat and including more plant-based protein in our diets, such as lentils, nuts and seeds, as well as fruit, vegetables and wholegrains.

‘These foods make up the traditional Mediterranean diet, which has been linked to a reduced risk of heart and circulatory diseases.’