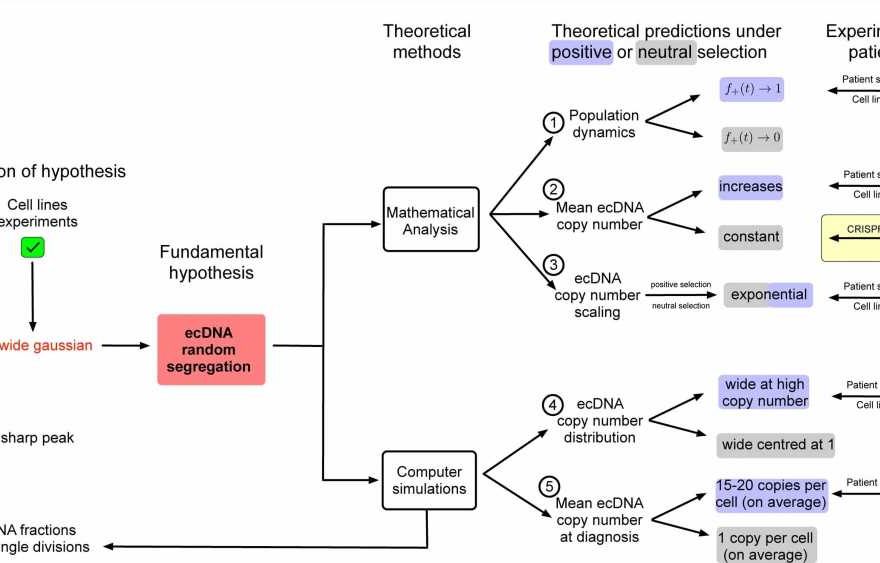 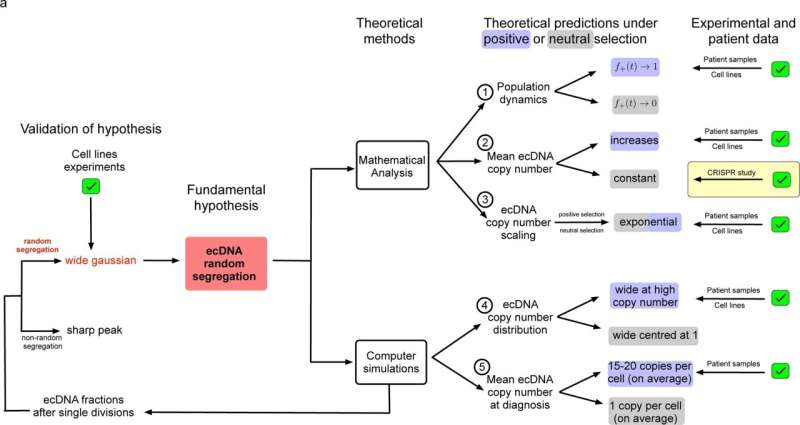 New research, co-led by Dr. Benjamin Werner from Barts Cancer Institute at Queen Mary University of London, indicates that the circular DNA structures present in around a third of cancers lead to extensive genetic diversity within tumors, giving them the ability to adapt rapidly to environmental stress and resist targeted cancer treatment.

The findings of the proof-of-principle study, published in Nature Genetics, add to the understanding of how cancer’s circular genomes, known as extrachromosomal DNA or ecDNA, contribute to poor outcomes in patients with some of the hardest-to-treat cancer types, and suggest that treating such cancers may require targeting the unique characteristics of ecDNAs in the future.

Defying the rules of segregation

Unlike the majority of a cell’s DNA that is packed into structures called chromosomes within the cell’s nucleus, ecDNAs are pieces of chromosomal DNA that have broken off and formed rings that float freely within the nucleus. Cancer cells can carry none, one or many ecDNAs and represent an extra source of genetic variation within tumors. Just like chromosomal DNA, ecDNA can carry mutated genes that drive cancer, called oncogenes.

In healthy cells, chromosomal DNA is usually split equally between two daughter cells when the cell divides. However, ecDNAs do not follow the normal rules of segregation, as they lack the machinery that controls this even split. As a result, when a cancer cell containing ecDNAs divides, the circular DNA particles are split randomly between the two daughter cells. As cell division continues, populations of cells with different numbers of ecDNAs build up, driving genetic variation within the tumor.

In this study, the team used a combination of mathematical and computational modeling, experimental approaches and clinical data to study how the numbers of ecDNA molecules vary from cell to cell within a population of cancer cells, and how this variation affects cancer’s ability to respond to challenges.

Using fluorescent labeling and live-cell imaging, the researchers observed that oncogene-carrying ecDNAs are randomly inherited in cell lines of prostate cancer, gastric cancer, colon cancer, neuroblastoma and glioblastoma. They then used computer and mathematical modeling to simulate what happens when a single cell containing ecDNAs expands to generate a population of 1 million cells.

The team expanded their analyses to look at six tumor cell lines of different cancer types known to carry oncogenes on ecDNA, and clinical samples taken from six patients with glioblastoma and four patients with neuroblastoma. In the cell lines and clinical samples, ecDNA copy number showed extreme cell-to-cell variation that matched the distributions predicted by the team’s simulations.

ecDNAs give cancer cells the ability to adapt faster

Tumor evolution driven by genetic variation is a major obstacle in the treatment of cancer. The greater the genetic variation (or heterogeneity) within a tumor, the more likely it will be able to adapt to changes in its environment.

Using a cell line pair derived from a patient with glioblastoma, the team investigated whether the presence of ecDNAs allowed the cells to adapt faster to survive challenges in their environment, including exposure to a targeted cancer drug.

Both cell lines carried a common oncogene (a mutation in the EGFR gene) that allows cancer cells to grow faster, but one cell line carried this oncogene on ecDNAs, which varied in copy number from cell to cell, and the other carried the oncogene on chromosomal DNA.

After treating both cell lines with a drug that specifically targets the EGFR mutation, the cell line with ecDNAs was able to adapt much faster to resist the effects of the drug by changing its composition to contain cells that carried fewer copies of ecDNA. With less of the drug target present in the population, the cells developed resistance to the drug in just two weeks, while the other cell line remained sensitive to the treatment.

The team saw similar effects in cell lines and samples of other cancer types carrying different oncogenes treated with other drugs, indicating that ecDNA generates high levels of heterogeneity, which enables increased initial resistance to environmental or therapeutic challenges.

Dr. Benjamin Werner, reader in somatic evolution at Barts Cancer Institute, says that “ecDNA has sporadically been recognized for many years, but only more recently has it been observed to drive tumor aggressiveness and poor outcomes in patients. In order to give us the best chance at finding effective ways to treat ecDNA-carrying cancers, and to make it possible to predict disease course and outcome, it is essential to understand the behavior of these circular DNA structures.”