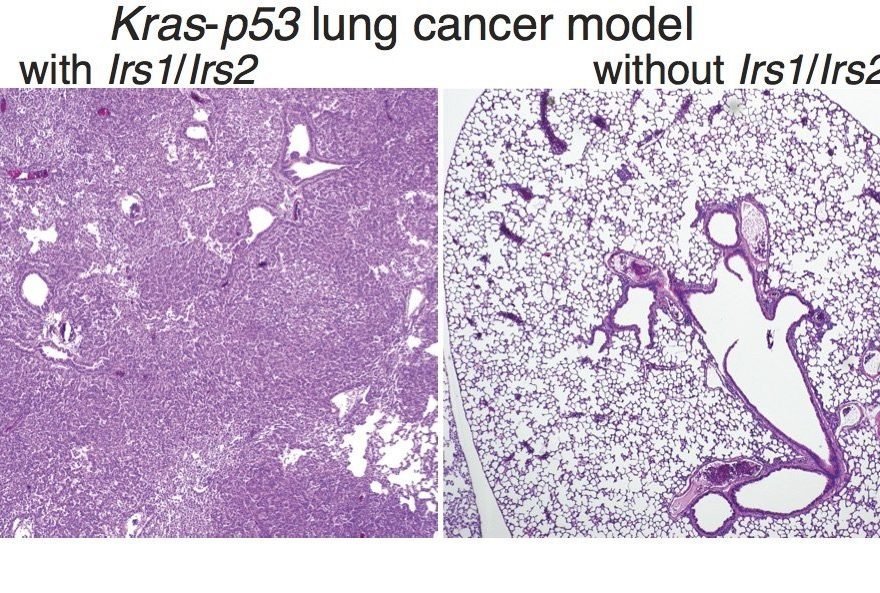 Non-small-cell lung cancer, the most common type of lung cancer, is the leading cause of cancer death in the U.S. A new study suggests that about 1 in 4 cases, those driven by the KRAS oncogene, could be successfully treated with a combination of drugs that are already available clinically. The Boston Children’s Hospital study was published today in the Proceedings of the National Academy of Sciences (PNAS).

For more than three decades, scientists have tried, with little success, to target the mutant KRAS oncogene with drugs. So instead, some researchers have tried to target related biological pathways.

One such pathway involves insulin and insulin-like growth factor-1 (IGF-1), which influence the uptake and release of nutrients and ultimately cell growth. But this pathway has not been definitively proven to fuel KRAS-driven lung cancers, and inhibitors of IGF-1 signaling have so far failed in clinical trials. In fact, a recent study in mice actually saw lung tumors become more aggressive. However, this study targeted insulin/IGF-1 signaling only partially.

In the new study, researchers used genetic techniques to completely block insulin/IGF-1 signaling, providing the best test ground yet for studying the pathway’s role in KRAS-driven lung cancer. The model establishes that completely blocking the pathway can slow tumor growth—but also demonstrates the need for a second step to fully suppress it.

“Our study uses a robust way to block insulin/IGF-1 signaling and addresses a long-standing question in KRAS-mutant lung cancer,” says Nada Kalaany, Ph.D., a researcher in Boston Children’s Hospital’s Division of Endocrinology and senior author of the paper. “When you use genetics, results can be more conclusive.”

A new model of growth factors’ effect in lung cancer

Kalaany’s team created the new model by crossing two strains of mice: a well-established strain that models KRAS-driven lung cancer, and another strain that lacks insulin/IGF-1 signaling, previously developed by Morris White, Ph.D., of Boston Children’s to study diabetes. This second model deletes two key genes, known as Irs1 and Irs2, that encode so-called “adaptor” proteins that are necessary for insulin/IGF-1 signaling (a discovery made by White in the 1980s).

“Almost all animals in this lung cancer model typically die within 15 weeks of KRAS activation,” says Kalaany, who is also an assistant professor at Harvard Medical School and an associate member of the Broad institute of MIT and Harvard. “But the ones that lost both Irs1 and Irs2 were completely fine—we saw almost no tumors at 10 to 15 weeks.” 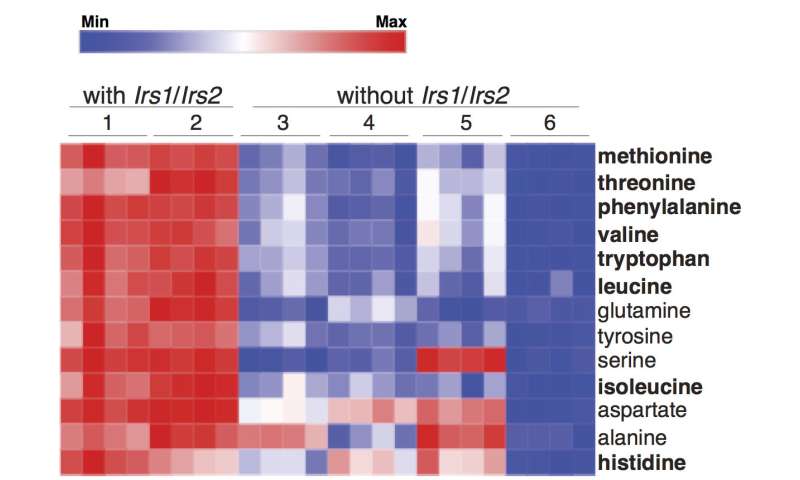 Kalaany and her colleagues were excited by this result, since IGF-1 inhibitor drugs that block insulin/IGF-1 signaling as effectively as Irs1/2 deletion, are already available. But they also knew that tumor cells often figure out work-arounds.

“We decided to let the animals live longer, and sure enough, at around 16 weeks we started seeing some tumors,” says Kalaany. “So then we asked, how were these tumor cells able to overcome loss of Irs1 and Irs2?”

Metabolic profiling revealed that tumor cells lacking Irs1/2 had significantly lower levels of essential amino acids, the building blocks of protein. Yet, outside the cells, amino acids were plentiful. The researchers found the same thing when they inhibited insulin/IGF-1 signaling in human lung tumors.

“Growth factors like IGF-1 tell cells that nutrients are around, so when you suppress their signaling, the tumor cells don’t take up the amino acids and think they are starved,” Kalaany explains. “But we found that the tumor cells can compensate for this and break down their own proteins to generate amino acids.”

A metabolic approach to cancer

It turns out protein breakdown can also be inhibited with existing drugs, such as chloroquine, which inhibits autophagy (literally, “self-eating”) and is being used in several cancer drug trials, and bortezomib (Velcade), a so-called proteasome inhibitor that is used to treat multiple myeloma.

Though both types of drugs, as well as IGF-1 inhibitors, are well tolerated, care would need to be taken in dosing any combination therapy to avoid toxicities, Kalaany says. Such therapies might also be safer if targeted to the lungs, she adds.

Like another recent study from Kalaany’s lab on pancreatic cancer, the current study shows how targeting metabolism in cancer cells can be an effective weapon.