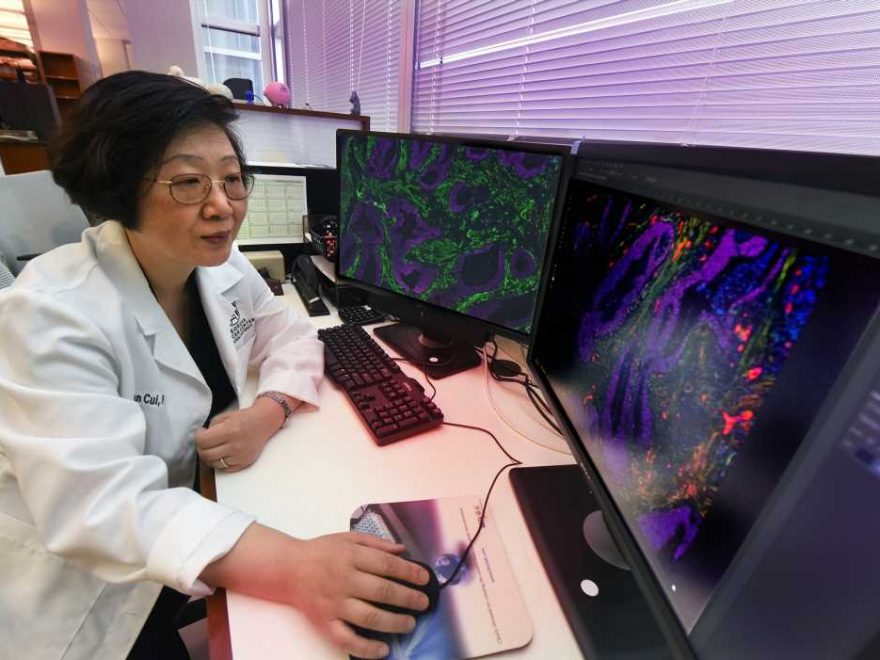 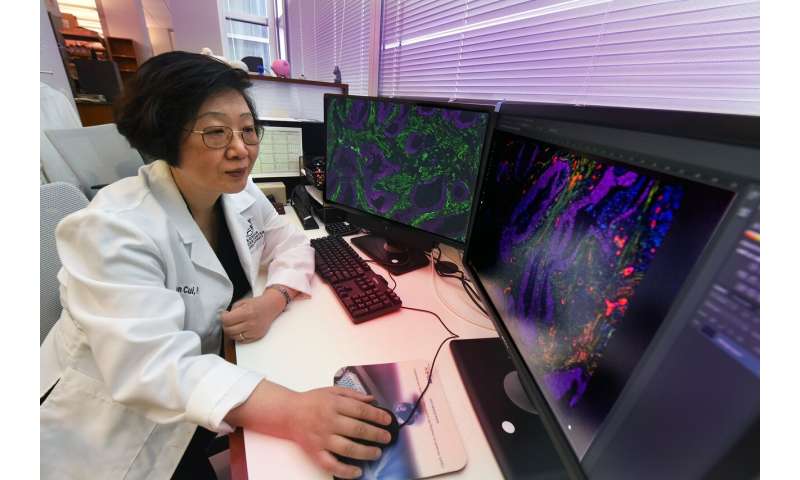 Aggressive colorectal cancers set up an interactive network of checkpoints to keep the immune system at bay, scientists report.

Immune checkpoints found throughout the body are intended to protect your body from being attacked by your immune system. But in the structural framework a tumor lays down, they instead protect the tumor, says Dr. Yan Cui, immunologist in the Georgia Cancer Center and Department of Biochemistry and Molecular Biology at the Medical College of Georgia at Augusta University.

In tumors, this structural framework is called cancer-associated fibroblasts, or CAFs, and Cui’s lab has found that in some cancers with a lot of CAFs, like more aggressive colorectal cancer, this often large mass of cells expresses high levels of the enzyme CD73, a common immune checkpoint.

But that is just the beginning of the story of CAFs, which work both like a fence to keep immune cells out of a tumor and like a dictator to suppress those that make it in, says Cui, corresponding author of the study in Nature Communications.

In what she calls a feedforward loop, the scientists have found that as the tumor and its CAFs grow, natural cell death occurs in the tumor. The high levels of CD73 present readily convert ATP released by those dying tumor cells to adenosine, which suppresses the immune response by activating the adenisone receptor A2A, which is highly expressed on immune cells.

More importantly, through extensively collaborative work with AU and international researchers, they discovered that adenosine converted by CD73 also simultaneously activates another one of its receptors, A2B, which is highly expressed on CAFs and promotes the CAFs to make even more CD73.

“CD73 expressed on CAFs functions in a self-serving process via the adenosine-A2B pathway to amplify their own CD73 expression and further suppress the immune response,” Cui says.

“CAFs are very immunosuppressive because they carry these checkpoints,” she adds. High levels of CAFs can also mean low levels of T cells, drivers of the immune response, and while there may be a lot of immune cells on the scene, they don’t appear to be attacking the tumor.

Strategic, effective targeting of these synergistic pathways in tumors with a lot of CAFs could help improve their attack and treatment success, Cui and her colleagues suggest.

While A2A and A2B are both adenosine receptors, they are not redundant, Cui notes, because they work differently to suppress the immune response.

Rather, as they found in their studies in human colorectal cancer cells and animal models, simultaneously inhibiting A2A and A2B action while neutralizing CD73, should enable the immune system to better attack these tumors, the scientists say.

Elevated CD73 levels in breast and ovarian as well as colorectal cancer already are associated with poor outcomes, and clinical trials of CD73 inhibitors and antibodies in combination with other treatments like immunotherapy as well as A2A antagonists are underway. However the crucial populations CD73 inhibitors target in the tumor microenvironment are not well defined and results are mixed, the scientists say. The source of CD73 in the microenvironment of a tumor also has remained a mystery.

There is evidence that CD73 can come from the tumor cells themselves, especially in tumors with low numbers of CAFs, as well as from immune cells, like regulatory T cells and myeloid cells, which both normally suppress the immune response as part of the body’s natural checks and balances. These cells also are known to have and to use CD73. Cui isn’t disputing that these cells are contributing CD73, but at least with some tumors, CAFs are a lot better at it. “In some tumors, they are a major source,” she says.

Fibroblasts, a usual constituent of body tissues, are early recruits for tumors so they can grow and so they can educate them to become a connected network that does their bidding. “The tumors can educate them, can turn them into a bad guy,” Cui says. Tumors also can secrete factors to recruit more fibroblasts through the blood circulation. After injecting tumor cells into a mouse, Cui has watched fibroblasts begin to move in and soon become efficient support machines.

“That’s how tumors get started. They have to have them to survive, to grow, to build up,” Cui says. “We have observed during tumor expansion, the cancer-associated fibroblast network can really expand tremendously,” she says.

In fact, immunostaining of the tumor microenvironment of colorectal cancer with CAFs stained green looks like a lush forest.

Cancer-associated fibroblasts appear to result from fibroblasts that already are part of a healthy tissue structure and from mesenchymal stem cells, which can differentiate into many cell types, including bone and muscle, and can be adapted by the tumor microenvironment for its purposes.