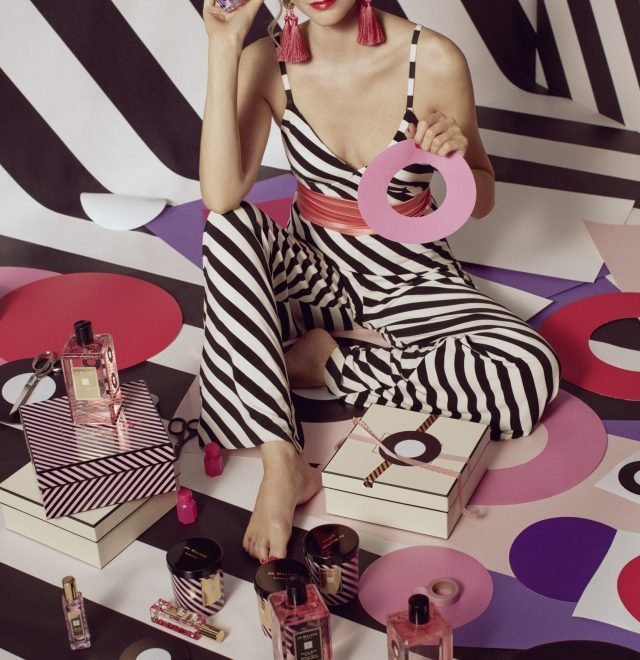 LONDON — Poppy Delevingne has turned on the taps and jumped into the bathtub for a limited-edition bath and body collection with Jo Malone London.Queen of Pop is Jo Malone London Girl Delevingne’s second capsule after last year’s Poptastic. The latest collection was inspired by — what else? — pop art, with zingy, striped pink-and-black packaging, colorful circle and dot motifs and pink bottles.The project was also very close to Delevingne’s heart. While Poptastic offered a duo of scents, Orange Blossom and Tuberose Angelica, designed to be layered, Queen of Pop is all about bath time.“It always comes back to bath time for me,” said Delevingne during an interview at the grand — and fragrant — Jo Malone London town house in Marylebone. Delevingne added that the collection is what Jo Malone London is all about: “Experimenting and playfulness and youth.”She said the collection includes some of her all-time favorite fragrances,  ”like Red Roses and Velvet Rose and Oud — which is rich and totally dreamy as a bubble bath. It’s a colorful celebration of all things bath time, and the perfect excuse to spoil yourself.”Queen of Pop features a 500-ml. bubble bath in three scents, Nectarine Blossom and Honey, Velvet Rose and Oud and Black Cedarwood and Juniper. Each one is enriched with conditioning ingredients, according to the brand. Pressed about her favorite product, Delevingne said it had to be the Velvet Rose and Oud bubble bath.There are also limited-edition 30-ml. colognes with scents such as Amber and Lavender, Peony and Blush Suede and Red Roses. The home candles come in Grapefruit, Blackberry and Bay, and Basil and Neroli.The candles and bottles of cologne are each priced at 47 pounds, while the bubble bath ranges in price from 58 pounds to 68 pounds for the Velvet Rose and Oud one.Customers will be urged to pick and mix their favorite bubble bath, candle and cologne combinations at stores including Selfridges, Jo Malone London Regent Street and jomalone.co.uk beginning in June. The collection will also be sold at Brown Thomas Dublin and select retailers worldwide.Delevingne, who has been forging a career as an actress, is taking Queen of Pop on tour with events involving games such as hook-a-duck (a raft of bright rubber ducks are part of the collection, too). The tour will hit places such as Los Angeles, Paris, Dubai, Milan, Taiwan and Sydney.Three years ago, Delevingne became the British brand’s first ambassador, or Jo Malone London Girl, hosting events and working on various projects with the brand, a division of The Estée Lauder Cos. Inc. “I’m looking forward to being the peony pioneer,” the peppy Delevingne said at the time, referring to the abundance of florals in the Jo Malone London collections.Separately to the Jo Malone London project, Delevingne has been appearing on the small screen, most recently in the Picasso-focused second season of “Genius,” the U.S. TV series that stars Antonio Banderas as the artist. Delevingne plays Marie-Thérèse Walter, Picasso’s French mistress and model.She said she loved working with Banderas, whom she describes as “very funny and incredibly generous. A joy to be around.”