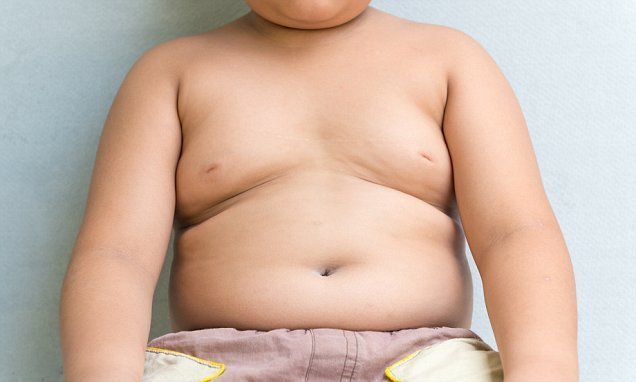 Obesity DOES run in families: Children are more likely to be severely overweight if their grandparents struggled to shift the pounds, study finds

Overweight children are more likely to come from families with a history of obesity, new research suggests.

Youngsters whose parents or grandparents suffered from high blood pressure, diabetes, high cholesterol or heart disease are also more at risk of carrying too much weight, an Italian study has found.

For unclear reasons, younger siblings with overweight relatives are more susceptible to obesity than their older brothers or sisters, the research adds.

Although the researchers did not speculate on why obesity appears to run in families, there may be a genetic link or it could be due to lifestyle factors, such as a preference for fattening foods.

Around 27 per cent of adults in the UK are obese. One in 10 children are severely overweight by five years old and one in five by 11.

Yet, if this excess weight is lost by adulthood, their risk of such diseases is comparable to the general population’s, which highlights the importance of tackling childhood obesity early, according to the researchers. A bottle of water a day that boosts youngsters’ ‘good’ bacteria may combat childhood obesity, research revealed in June 2017.

Water containing a prebiotic supplement should make obese children a healthy weight after just one year, a study found.

This compared to a 17.6lb (8kg) weight gain among children receiving a placebo, the research adds.

Study author Professor Raylene Reimer from the University of Calgary, said: ‘Powdered fiber, mixed in a water bottle, taken once a day is all we asked the children to change, and we got, what we consider, some pretty exciting results – it has been fantastic.’

The researchers asked 42 obese or overweight children aged seven to 12 years old to receive either a prebiotic, known as oligofructose-enriched inulin, or placebo once a day for 16 weeks.

The prebiotic was a white powder mixed in water.

Prebiotics are indigestible food ingredients, such as fiber, that act as fertilizers to stimulate the growth of bugs in the digestive tract. Probiotics specifically introduce new bacteria into the gut.

Lead author Dr Domenico Corica, from the University of Messina, said: ‘I would like to highlight we found the most severely obese children – even those who were very young – were showing insulin resistance.

‘This is a very important finding that underlines the need for early intervention care programmes involving health providers, schools and other government institutions, primarily to modify the lifestyle, i.e. eating habits, physical activity, screen time, of obese children and their families.’

The researchers plan to repeat their study on a larger scale.

Dr Corica added: ‘We look forward to increasing the number of children and expanding the geographic area, as well as evaluating other aspects that may influence the onset and severity of childhood obesity.’

The researchers analysed 260 overweight or obese children aged between two and 17 years old.

They collected research on the children’s family histories of obesity and heart disease via interviews with their parents and assessing past medical records.

Blood samples were taken from the children to determine their cholesterol, glucose and insulin levels.

The findings were published in the journal Frontiers in Endocrinology. Youngsters whose parents or grandparents suffered from high blood pressure, diabetes, high cholesterol or heart disease are also more at risk of carrying too much weight (stock)

ARE MOTHERS WHO WORK LONGER HOURS MORE LIKELY TO HAVE OBESE CHILDREN?

Working women are less likely to have obese children – but only if they are in the office for under 24 hours a week, research suggested in October last year.

Yet, youngsters aged between three and four years old are more at-risk of obesity if their mothers work for more than 35 hours a week, a study by the WZB Berlin Social Science Center found.

Those aged between eight and 14 are less likely to carry excess weight if their mothers work 35-to-40 hours a week, the research adds.

It is unclear why obesity risk varies according to differences in children’s ages and their mother’s working hours, however, the researchers believe seeing less of their parents may be detrimental for some, while others could benefit from the financial and ‘psychological’ advantages.

The World Health Organization estimates 42 million children around the world are overweight or obese, putting them at an increased risk of type 2 diabetes.

How big a problem is obesity in the UK?

Earlier this year a report by The Royal College of Paediatrics and Child Health (RCPCH) warned children in the UK are losing up to 20 years of healthy life due to the government failing to tackle obesity.

This includes a failure to impose a ban on junk-food adverts or prohibit take-away outlets opening near schools.

The RCPCH, which represents 17,500 doctors, nurses and other health experts, says many children are growing into obese adults and developing type 2 diabetes.

The UK is the fattest country in western Europe with obesity increasing faster than in any other developed nation.

Obesity rates in children are predicted to increase, despite Government pledges to reduce them.

Diet drinks may not be healthier

This comes after research released last month suggested diets drinks may not be healthier.

Artificial sweeteners, such as the controversial aspartame, are still linked to obesity and diabetes, a study found.

Speaking of the current study’s findings, lead author Dr Brian Hoffmann, from Marquette University, Milwaukee, said: ‘It is not as simple as “stop using artificial sweeteners” being the key to solving overall health outcomes related to diabetes and obesity.

‘As with other dietary components, I like to tell people moderation is the key if one finds it hard to completely cut something out of their diet.’