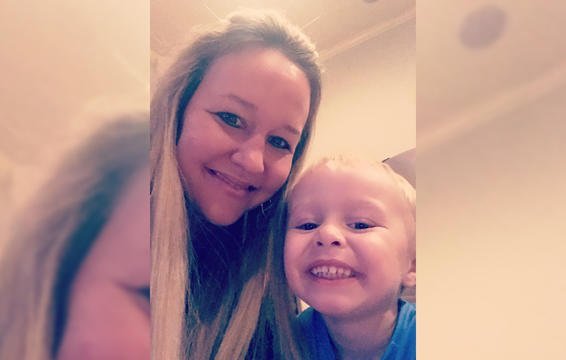 Six months into my pregnancy, I felt a lump on the side of my neck, about three inches below my ear. I couldn’t really see the lump, so I thought it just was a swollen lymph gland from a sinus infection, which I occasionally get, and I didn’t pay attention to it. I didn’t even mention it to my doctor.

Then, a few weeks after my son’s birth, I came down with a sore throat that wouldn’t go away. After two weeks, I thought I might have strep throat, which is the last thing I wanted with a newborn in the house. I told my husband I needed to go to our family practitioner, so I could get antibiotics to clear it up.

Two minutes into the examination, our family practitioner saw the lump and felt it. “That’s not good,” he said. I was a little taken aback. “What do you mean, it’s fine! Should I be worried?” “Don’t worry until there’s something to worry about,” he answered and told me I needed to go have a scan. “I’ll do that,” I said, but I didn’t think anything of it.

I had the scan two days later, and four days after that, I was back at the doctor’s for the results. As soon as I walked into his office, he gave me a funny look and said, “You’ve got thyroid cancer.”

Never in a million years did I think the lump would result in a thyroid-cancer diagnosis. I didn’t even know a person could have thyroid cancer. I just heard “cancer,” and I thought I was going to die. I was terrified—I had a new baby and he needed me.

The thyroid is a butterfly-shaped gland in the neck that produces hormones that affect a person’s metabolism and every organ in the body. Roughly 57,00 people receive a thyroid cancer diagnosis each year, according to the American Cancer Society. Three out of four of those people are women.

Four days later, I was in the operating room. Going in, I thought the doctor was going to make a small incision, take out my thyroid, and everything would be fine. Instead, the surgeon cut open my neck practically from ear to ear after he discovered the cancer had spread. I not only had medullary thyroid cancer—I had stage 4, the most advanced stage of cancer. While surgery is usually successful in treating stage 1 or 2, stage 4 is more problematic.

I was in surgery for 10 hours. The surgeon had to do a complete neck dissection. He took out 18 lymph nodes, 11 of which were cancerous. There was a tumor on my right vocal cord, which was left paralysed after the surgeon removed it. There was no other option, though. He removed as many of the tumors as he could, but he could not remove them all.

The doctors kept me in the intensive care unit for 10 days. I couldn’t do more than whisper, thanks to my paralysed vocal cord. Because the surgeon had cut nerve tissue when he was removing the cancerous lymph nodes and cells, I couldn’t move my right arm. I couldn’t even pick up and hold my baby. To this day, my chest is numb from the chin down, but I can move my right arm and I can speak again.

‘I STILL HAD CANCEROUS CELLS IN MY BODY’

After the surgery, I spent a lot of time trying to figure out how I could have brushed off my symptoms. The doctors told me that, based on the size of the tumor and the way the cancer had metastasised, I’d probably had cancer for five years. They said one of the symptoms is an upset stomach. I’d had an occasional upset stomach, but I just thought something hadn’t agreed with me. Coming to terms with everything was tough.

What got me through were my friends and family. I knew they loved me but I didn’t realise how much support I had until that happened. My mother-in-law came over to take care of the baby. My husband, who was working for my dad at the time, stayed home to be with me. My best friend called every day to check up on me. She brought dinners over all the time, and once sent her husband to mow the lawn without telling me first. Now I always tell my family and friends I love them, just because you never know.

My surgeon referred me to an endocrinologist, but she said she’d seen stage 4 medullary thyroid cancer only once before and didn’t know what she could do for me. She said this kind of cancer can linger and grow slowly for years and then suddenly spread quickly. Thyroid cancer doesn’t respond well to chemo. Since the surgery wasn’t 100-percent effective, the only treatment for me was to monitor the cancer carefully.

Besides, it was obvious from the calcitonin levels in my blood—hormones produced by the thyroid—that I still had cancerous cells in my body. The normal amount of calcitonin for a woman is roughly five pictograms per millilitre, according to the National Institutes of Health. Before surgery, mine was over 25,000; after surgery it had gone down to about 200.

The endocrinologist thought the best place for me was the MD Anderson Cancer Center in Houston. Even though it’s nearly 800 kilometres away from my home in Brandon, Mississippi, I knew I had to go. I didn’t have any other choice. I cried a lot, though. I’d thought after the surgery this ordeal would be over with and I’d be back to my normal life. Now I’d have to leave my son again while I traveled to Houston.

The first time I went, I was overwhelmed, because the hospital is so huge, but my doctor and the staff there put my husband and me at ease and calmed our fears. Now I go every six months. Every time I go, I have a full-body CT scan with contrast, which creates a series of pictures of my organs and tissues so the doctors can spot any tumors.

Before each visit, I cry a lot and get nervous, wondering what they will find. The first time, there was a spot on my liver, but it hasn’t gotten bigger. Another time, a scan picked up a spot at the top of my vertebrae. During my last visit, my doctor told me everything was stable. As long as these tumors aren’t growing, I take that as good news. Eventually, though, the cancer will start to spread. My doctor says by then I may be able to take advantage of new treatments that are just in the trial stage now.

My son is now 3-and-a-half and he’s so sweet. I want to spend all my time with him. I don’t think anything bad will happen, but if it did, I’d want my son to have fond memories of me, to know who I was.

Still, I don’t sit around throwing myself a pity party. I did feel sorry for myself at first, of course—I wondered why this had happened to me when I was just starting the family I’d wanted for so long. But I quickly realised you can’t do that and that’s not who I want to be. Cancer is something that happens.

Now I feel blessed for the little things, like how lucky I am to have good doctors and to be able to go to Houston, because not everybody has that chance. I just don’t take things for granted, like being a mom and having a supportive husband who’s been with me through everything. I’m so grateful I’m here.

I sometimes wonder what would have happened if doctors had found the cancer sooner. But if they had, I wouldn’t have my son. (For one, I couldn’t have full-body scans while I was pregnant, and I would have been too scared to carry a baby knowing I had cancer.) So maybe things happened the way they were supposed to.

This article originally appeared on Women’s Health US