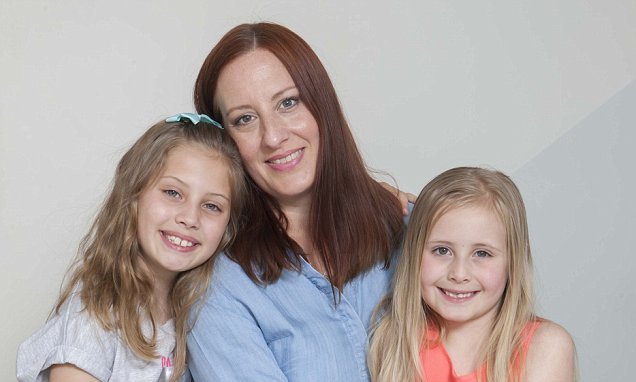 Joanne spent £5,000 to end her toothache…then realised it had NOTHING to do with her teeth! 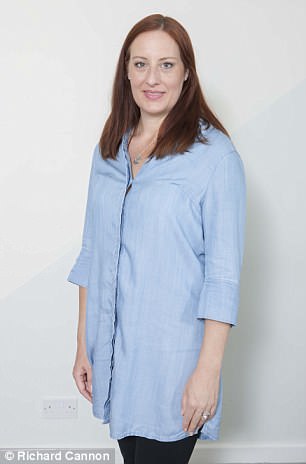 On a hot summer’s day, most of us might welcome a cooling blast from a fan, or air-conditioning — but not Joanne Doyle. Because if so much as a light breeze touches Joanne’s face, it can trigger excruciating pain.

Joanne, 42, suffers from trigeminal neuralgia — a severe sudden facial pain that affects ten in 100,000, according to NHS figures.

It causes sharp, shooting pain ‘like an electric shock’ that can be felt down the side of the face, in the jaw, teeth, even the gums. It usually occurs on one side in short attacks that can last anything from a few seconds to up to two minutes.

It took months for Joanne to be diagnosed and not before she’d had a tooth removed and two rounds of expensive and entirely unnecessary root canal work. In fact, almost one in ten patients with the condition ends up having unnecessary dental treatment before the true problem is spotted.

The trigeminal nerves are the largest of the nerves in the head. We have two — one on the right side and one of the left side of the face.

Each one begins in the skull by the ear then branches off into three sections, one running to the front of the forehead, one to the cheek and one down to the jaw. The nerves send information about temperature and pressure and pain from each side of the face up to the brain.

Trigeminal neuralgia occurs when the messages get confused and instead of relaying a sense of touch to the brain, the nerve sends a message of pain, explains Professor Joanna Zakrzewska, a consultant in facial pain at University College London Hospitals NHS Trust.

‘Instead of it relaying information saying “the face has been touched” it relays it as a pain signal. It can be very disabling.’

‘It’s hard to describe just how painful an attack is,’ agrees Joanne, who lives in Hertfordshire. ‘It’s like an electric shock that completely floors me — worse than childbirth, worse than a tooth being pulled. I can’t speak or do anything. I just have to wait until it subsides.’

Joanne’s trouble began six years ago when she was 36. She and her husband Nick, 43, a project manager, had just had their second child, Eva (the couple also have another daughter, Isabella, who is eight).

‘When Eva was four months old, I started getting what I assumed was the most dreadful toothache on my left side,’ Joanne recalls.

She saw her dentist, who said it could be an infection inside the tooth and that he would perform some root canal work to relieve the pain — this involves opening up the tooth and removing any infection in the soft tissue in the centre (the pulp).

It only made the pain worse. ‘Within days, I was suffering what felt like electric shocks down the left side of my face,’ she says. ‘It would start near my ear and then shoot down my jaw into my teeth.’

One attack was so crippling that Nick rushed Joanne to A&E. 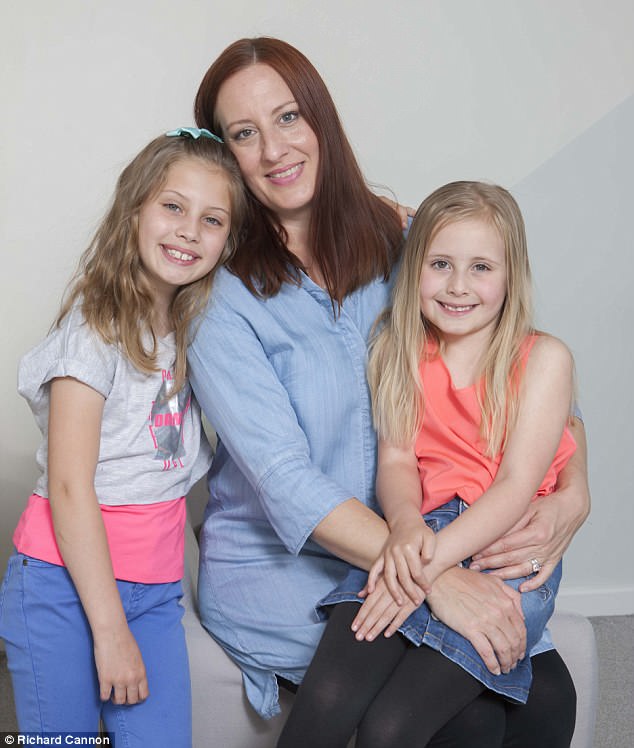 Diagnosed at last! After spending thousands on dentistry, Joanne – pictured here with her daughters Isabella (8) and Eva (6) – got the correct diagnosis

She explained she’d had root canal work done and the doctors told her it must be related to that and sent her home with oxycodone, a strong opiate painkiller. Even that didn’t help.

As chewing seemed to trigger attacks, Joanne began to eat only pureed food, losing 4st in just a few months. ‘Even speaking seemed to bring it on, if my tongue brushed the roof of my mouth,’ she says.

After four weeks, Joanne went back to her dentist. He said he could see some fluid and infection so he removed the tooth he’d worked on before and did more root canal work on another. In total Joanne spent around £5,000 on dental work, but still the attacks came.

‘I lived in terror of when they would happen,’ she recalls.

It was at this point, after five months, she saw her GP, who referred her to a neurologist, who instantly recognised the symptoms as trigeminal neuralgia.

‘I was relieved to have a diagnosis but also upset I’d had tooth work for nothing,’ she says.

Professor Zakrzewska says it takes an average of four years before a person gets diagnosed and the treatment they need, adding that: ‘In our studies, 8 per cent of people had irreversible, often unnecessary, dental treatment before getting a proper diagnosis of trigeminal neuralgia.’

This, she says, is because both GPs and dentists are often slower to consider a diagnosis of trigeminal neuralgia because it is rare.

Instead they are much more likely to think it’s nerve damage around a tooth. ‘It often doesn’t cross a GP’s or dentist’s mind.’

She adds that key signs doctors should note are ‘a recurrent, brief, severe pain on one side of the face, or only inside the mouth, which feels like an electric shock shooting and stabbing, which in most cases is provoked by light touch such as washing the face.’

Professor Zakrzewska explains that trigeminal neuralgia is usually caused by a large blood vessel pressing on the nerve and eroding the myelin, the substance that surrounds nerve cells, which means they don’t function properly. It can also be caused by a cyst or tumour sitting on the nerve, but this is rare.’

It may be that myelin is eroded simply as a result of ageing. Hormones may also play a part. Significantly more women suffer from trigeminal neuralgia than men, often diagnosed after menopause. ‘This is partly because women live longer and trigeminal neuralgia increases with age,’ says Professor Zakrzewska. ‘But we are also asking whether there is a hormonal protective factor before menopause.’

The severity and length of the symptoms vary from person to person, but Professor Zakrzewska explains that trigeminal neuralgia is almost always unilateral — affecting one side of the face at a time.

Doctors are unsure as yet why this might be. Even very strong painkillers will not touch this type of nerve pain.

‘We hear of patients getting an attack and going to A&E because it is so unbearable, the hospital gives them morphine, which does nothing for patients with trigeminal neuralgia, because it does not block the channels by which the pain messages are transmitted,’ says Professor Zakrzewska, who is also head of the medical advisory board for the charity Trigeminal Neuralgia Association UK.

‘The attack ends naturally and the patient goes home, still not knowing what caused it.’

WHAT IS TRIGEMINAL NEURALGIA?

Trigeminal neuralgia is sudden, severe facial pain. It’s often described as a sharp shooting pain or like having an electric shock in the jaw, teeth or gums.

It usually occurs in short, unpredictable attacks that can last from a few seconds to about two minutes. The attacks stop as suddenly as they start.

In most cases trigeminal neuralgia affects part or all of one side of the face, with the pain usually felt in the lower part of the face. Very occasionally it can affect both sides of the face, although not usually at the same time.

Instead of painkillers, treatment typically involves anti-convulsants more commonly prescribed for epilepsy. These help by calming hyperactivity in the nerves and brain, reducing perception of pain signals. But there are side-effects, such as dizziness, nausea, confusion, poor memory and drowsiness.

If trigeminal neuralgia is found to be caused by a compressed nerve, surgery is an option — this involves moving the offending vessel out of the way and securing it in a new location.

After her diagnosis, Joanne had an MRI scan to rule out other serious conditions such as a tumour pressing on the nerve and also to check if a compressed nerve was visible. The scan came back clear, and while relieved there wasn’t a more sinister cause, she says: ‘I was upset as surgery — however daunting — might have been an option to take the pain away.’ This kind of surgery is not the only option, however. There is also something called a gasserian ganglion block.

The gasserian ganglion is ‘a transmission hub’ for nerve messages, found just inside the skull. A heated needle is inserted through the cheek to destroy some of the nerve fibres. Another option is targeting this area with Gamma Knife radiation.

And there may be new drugs in the pipeline. ‘We have published a small study in The Lancet on the drug vixotrigine which is showing promise that it does stop the pain and appears to have fewer side-effects than current drugs,’ says Professor Zakrzewska.

‘We are hoping to start larger trials internationally, including the UK, in autumn and will be asking dentists and doctors to send us patients.’

For now, Joanne is managing with anti-convulsant drugs, prescribed by her consultant. However, she is still unable to work. A few weeks after her diagnosis, she decided not to return to her job as a corporate affairs manager at the end of her maternity leave.

‘I just didn’t know how I would cope,’ she says. ‘I had no idea when the next electric shock of pain might strike.’

She does her best to avoid anything that might trigger her condition. ‘I avoid planes because of air-conditioning, also shopping centres, airports, office buildings,’ says Joanne. ‘On windy days I won’t leave the house and on other days I wear a fleece face-covering like the ones used for skiing.

‘I can go for weeks without an attack, other times I’ll get them for weeks at a time.

‘People don’t understand that this condition is unpredictable.’

Joanne now volunteers manning the helpline for the charity Trigeminal Neuralgia Association UK. ‘I want people to know that if they have a pain that’s excruciating — like electric shocks — they should ask to be referred to a neurologist. No one should have to live with this kind of pain.’

For further information go to: tna.org.uk