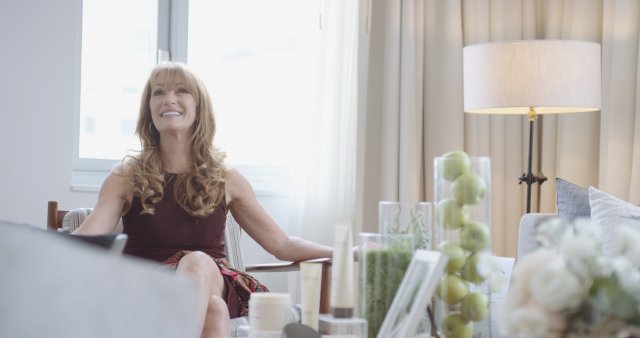 Even at 67, Jane Seymour wasn’t afraid to appear in Playboy. Last March she became the oldest woman to pose for the publication, which she has been in three times over the course of her career.And why not? While the shots are not nude, they highlight her arms and legs where there is nary a sign of saggy skin. Seymour attributes her smooth limbs to a skin-care collection called Crepe Erase, which she was in New York City to promote. Crepe Erase debuted on QVC in 2016 and just rolled out to Ulta Beauty stores in March. Ulta first tested it online where it sold out twice. “The Ulta people can’t keep it in. No one has addressed crepey skin in this way,” explained Seymour.Seymour almost didn’t become the face of the brand, admitting she was leery at first. “I didn’t want to do something with crepey anything,” Seymour told WWD from a suite at The Smyth Hotel. “Then I looked in the mirror and went ‘oh I have crepey skin, maybe I should try it.’”Without telling anyone, she applied it for two days. The woman she worked out with accused her of “succumbing,” suggesting Seymour had done a peel or dermabrasion or something more drastic. “I don’t do plastic surgery. I’m too afraid,” Seymour insisted, noting she eschews anything that’s permanent. “I realized really worked,” she said, allowing a visitor to feel her silky skin. She even tested it on her young granddaughter. “It is not tested on animals and it is safe to use on children. I’ve slathered it on my grand babies. They’ll never have crepey skin,” she said.Crepe Erase is part of her grooming regimen (she likened the use to brushing her teeth), a process that doesn’t involve the services gathering a tailwind like artificial lashes and hair extensions. Seymour often applies her makeup, including single lashes from Ardell. “When you do lash extensions, your eyelashes fall out and there’s nothing you can do,” said Seymour. “Hair extensions are also a nightmare. I use clip on extensions, or better yet a wig because a wig cap is the perfect natural face lift. If you don’t want wrinkles, put on a wig.”Cleansing, exfoliating, moisturizing and protecting from sun exposure are her regimen. “I never go to sleep with any makeup on. And don’t smoke cigarettes, no matter how expensive your creams or how many treatments you get, you can’t offset smoking.”Seymour does subscribe to the benefits behind certain vitamins and ingredients to promote health and beauty, such as arnica for swelling, calcium and vitamins such as E and D. She feels a good diet is just as important. “I believe when I eat fresh greens, blueberries and fresh fish, those nutrients hit my system better. People think if you take the vitamins, you don’t have to eat the food. But some vitamins disappear from your system.”Seymour has a packed schedule including a new movie, a book that’s recently been published, a debut of a fresh furniture collection, a fragrance and fund-raising for her Open Hearts Foundation.