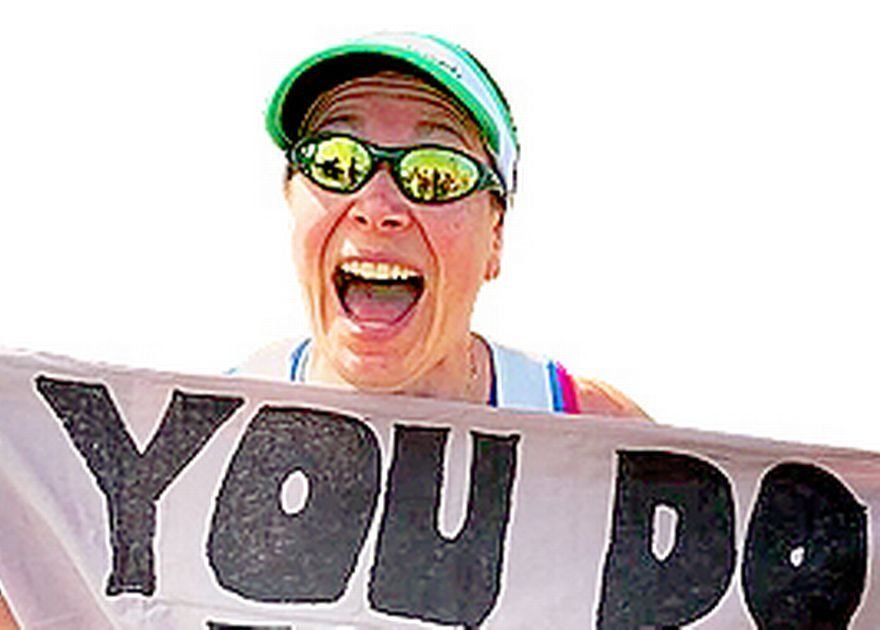 Becs Hurst can still recall the shame as her childhood nickname “tree trunk legs” was shouted across the schoolyard by bullies.

It sparked a cycle of binge eating – particularly sausages and Oreo cookies – and crippling anxiety which saw her weight creep up to 22 stone.

But now, after losing 9st 2lbs, the last thing Becs is ashamed of is her legs.

After all, they’re how she’s completed more than 50 Park Runs and achieved her dream of running the London Marathon – in six hours and 19 minutes.

She admits the thought of crossing the finish line earlier this month didn’t always seem possible.

Becs, 41, says: “It was undoubtedly one of the best days of my life and the ­atmosphere, the positivity, was incredible.

“Everyone was smiling and helped other runners who were struggling in the heat. I’d wanted to beat six hours, but because of the heat I had to scale it back, which is fine.

“Just knowing I’ve done a marathon considering where I was two years, or even one year ago, is unbelievable.

“I’m regularly told by colleagues how I’ve inspired them to start running too – if I can enjoy it, anyone can.”

Becs’ weight problem started at an early age when her nan would turn up on her doorstep with biscuits and cakes.

“Nan was basically a feeder who took pride in me being ‘healthy’, or to ­translate ‘chubby’,” Becs says.

“Until I went to college I literally only had one friend, and she went to a different school so I felt so isolated.”

At college, Becs was able to start again and made new mates. But she was still eating large amounts of junk food.

Heartbreakingly, Becs, of West Wickham, South East London, admits she felt she was the last option when it came to meeting men.

“We’d go clubbing and I was always the ‘10-to-twoer’, the one blokes would jump on just before the club shut because they couldn’t find anyone else,” she says.

Like many students, Becs would binge drink and then eat kebabs and fry-ups the next day to try to cure her hangover.

“Working in nurseries through my 20s and 30s didn’t help my diet either,” she admits.

“I love working with kids and wouldn’t change that for anything, but there’s a constant supply of treats, plus I’d also eat with the kids before having my own dinner at home again a couple of hours later.”

Becs says her two big downfalls were sausages and Oreos.

She would always have a fried breakfast with sausages, and would often have sausages at lunch too, and regularly at night. “I felt like I was turning into a sausage,” she says.

“And I could inhale a full packet of Oreos. To me, the idea of sharing a ‘Share Pack’ was a joke. All in all, my diet was a mess and I didn’t care.”

Her GP didn’t pull any punches – he told her she was grossly obese and at serious risk of heart disease and stroke.

“There I was, in my 30s, 22-stone, single, being told I was killing myself. It was the wake-up call I needed to change,” she says.

The local authority was offering a free 12-week ­Slimming World course, so she signed up thinking she had nothing to lose – and with the prospect of having a 40th birthday party the next autumn, she had the incentive of not being the “usual blob” in photos.

Becs started with Slimming World just before Christmas but what should have been the hardest time to diet was easy, she says, because unlike other diets she never felt any food was off limits.

“I could have chocolate, takeaways, anything, but in moderation,” she says. “I genuinely never felt hungry.”

In 12 weeks she lost one and a half stone, so decided to carry on paying for the classes out of her own pocket.

“The Slimming World strategy for exercise was called Body Magic – just moving more, but never getting massively out of breath,” she says.

Becs’ older sister Louise would set her challenges until in the April she told Becs they must do a Park Run together with her husband and kids.

But Becs had always been the one at school who’d feigned injury when it was cross country time.

She was also worried people would laugh at her. But with Louise’s insistence she decided to give it a go.

“I pretty much walked the entire 5k, but everyone there was so friendly and encouraging, no matter how slow I was,” Becs says.

For the first time she felt like she was part of a community where she could exercise without being made to feel ridiculous.

Encouraged, Becs started with short and very slow runs on her own then joined some running groups and started meeting with other runners, as well as her Slimming World consultant and now close friend Roxanne.

By the time of her 40th birthday in September 2016, she had lost four and a half stone.

“Of course, I was still far from slim, but I felt so confident and had so many compliments,” she says.

“It was like I’d turned a corner and had the running bug to keep me going.”

In her spare time, Becs had also started an online bakery business, and that summer got involved with The Sick ­Children’s Trust and their Big Chocolate Tea Party campaign.

“With my job working in early years, the charity is so close to my heart as I’ve had children I care for relying on the incredible facilities at Great Ormond Street,” she says.

Becs did her first 10k for them before being offered one of the places in the London Marathon for the charity.

“The reality of knowing I now had to train so incredibly hard was daunting, but also really exciting,” she says. “I’ve done around 50 Park Runs now.

“I even met Dame Kelly Holmes at one run, which was incredible – I showed her old photos of me on my phone and she said I was ­‘inspirational’ for other runners to get active.”

Now, after completing the marathon, Becs is thrilled with her progress.

“I’m 12st 11.5lb and have lost eight inches overall since Christmas. My waist is down to 30in from the 50in I was when I started with dieting,” she says.

Needless to say, all her vital statistics are back to normal for the first time since she was a little girl – cholesterol, BMI and blood pressure.