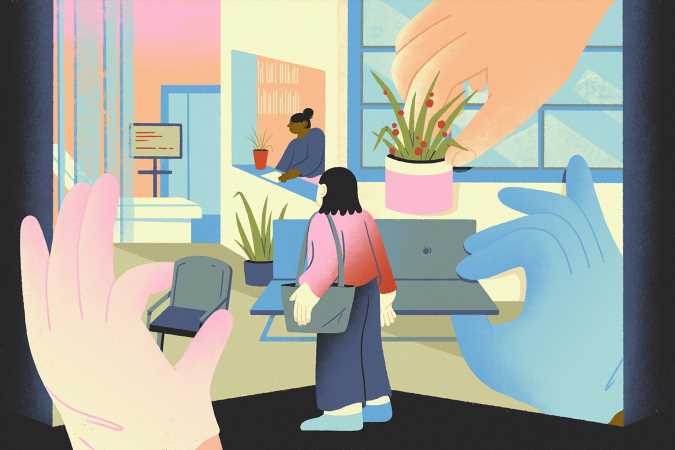 She spent decades running a family dry cleaning store outside Cleveland after emigrating from South Korea 40 years ago. She still freelances as a seamstress, although work has slowed amid the covid-19 pandemic.

While Lee likes to treat her arthritis with home remedies, each year the pain in the knuckles of her right middle finger and ring finger increases until they hurt too much to touch. So about once a year she goes to see a rheumatologist, who administers a pain-relieving injection of a steroid in the joints of those fingers.

Her cost for each round of injections has been roughly $30 the past few years. And everything is easier, and less painful for a bit, after each steroid treatment.

So, in late summer she masked up and went in for her usual shots. She noticed her doctor’s office had moved up a floor in the medical building, but everything else seemed just the same as before — same injections, same doctor.

Then the bill came.

Total bill: $1,394, including a $1,262 facility fee listed as “operating room services.” The balance included a clinic charge and a pharmacy charge. Lee’s portion of the bill was $354.68.

What Gives: Lee owed more than 10 times what she had paid for the same procedure done before by the same physician, Dr. Elisabeth Roter.

Lee and her family were outraged by the sudden price hike, considering she had gotten the same shots for the far lower price multiple times in the years before. Her daughter, Esther, said this was a substantial bill for her mother on her Social Security-supplemented income.

“This is a senior citizen for whom English is not her first language. She doesn’t have the resources to fight this,” Esther Lee said.

What had changed was how the hospital system classified the appointment for billing. Between 2019 and 2020, the hospital system “moved our infusion clinic from an office-based practice to a hospital-based setting,” University Hospitals spokesperson George Stamatis said in an emailed statement.

That was a change in definition for billing. The injection was given in the same medical office building, which is not a hospital. Lee did not need or get an infusion, which requires the insertion of an IV and some time spent allowing the medicine to flow into a vein.

Nonetheless, that change allowed the hospital system to bill what’s called a “facility fee,” laid out on Lee’s bill as “operating room services.” The increasingly controversial charge — basically a room rental fee — comes without warning, as hospitals are not required to inform patients of it ahead of time.

Hospitals say they charge the fee to cover their overhead for providing 24/7 care, when needed. Stamatis also noted the cost of additional regulatory requirements and services “that help drive quality improvement and assurance, but do increase costs.”

But facility fees are one reason hospital prices are rising faster than physician prices, according to a 2019 research article in Health Affairs.

“Facility fees are designed by hospitals in particular to grab more revenue from the weakest party in health care: namely, the individual patient,” said Alan Sager, a professor of health policy and management at the Boston University School of Public Health.

Lee’s insurance had changed to a Medicare Advantage plan in 2020. The overall cost for the appointment was nearly three times what it was in 2017 — before insurance even got involved.

The National Academy for State Health Policy has drafted model legislation for states to clamp down on the practice, which appears to have worsened, Executive Director Trish Riley said, as more private practices have been bought by hospitals and facility fees are tacked onto their charges.

New York, Oregon and Massachusetts are pursuing legislation to curtail this practice, she said. Connecticut has a facility fee transparency law on the books, and Ohio, where Lee lives, is considering legislation that would prohibit facility fees for telehealth services.

But Riley noted it’s difficult to fight powerful hospital lobbyists in a pandemic political climate, where hospitals are considered heroic.

The Centers for Medicare & Medicaid Services has attempted to curtail facility fees by introducing a site-neutral payment policy. The American Hospital Association sued over the move and plans to take the case to the Supreme Court.

Resolution: Lee’s daughter, Esther Lee, was furious with the hospital over the fee. Her mom, who is fiercely independent, finally brought her the bill after trying for weeks to get the billing office to change it.

“This is wrong,” Esther Lee said. “Even if it was a lot of money for services properly rendered, then of course she would pay it. But that’s not the case here.”

“I don’t want to lose my credit,” Kyunghee Lee said. “I always paid on time.”

But after receiving a “final notice” in February, and then being threatened with being sent to collections, the Lee family gave up the fight. Esther Lee paid the bill for her mother. But she’s worried her mom will delay getting the shots now, putting up with the pain longer, as she knows they are more expensive.

The Takeaway: When planning an outpatient procedure like an injection or biopsy, call ahead to ask if it will happen in a place that’s considered a “hospital setting” — even if you think you understand the office’s billing practices. Ask outright if there will be a facility fee — and how much — even if there’s not been one before. If it’s an elective procedure, you can search for a cheaper provider.

One easy place to scout for more affordable care is the office of a doctor whose practice has not been bought by a hospital. It is the hospital, not your longtime doctor, that is adding the fee, said Marni Jameson Carey, executive director of the Association of Independent Doctors.

“This is one of the terrible fallouts of consolidation,” Carey said.

Stephanie O’Neill contributed to the audio version of this story.

Bill of the Month is a crowdsourced investigation by KHN and NPR that dissects and explains medical bills. Do you have an interesting medical bill you want to share with us? Tell us about it!