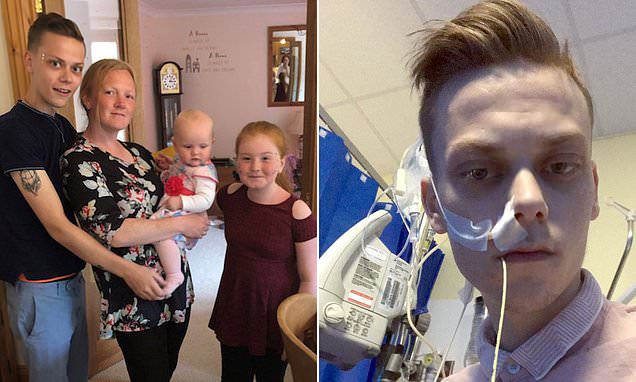 Father, 23, who ‘vomits eight times a day’ because of a mysterious condition he’s had for TWO YEARS launches a desperate appeal for experimental treatment to give him a ‘new stomach’

A father suffers from a mysterious condition that causes him to vomit every time he eats or drinks.

Kurtis Lancaster, 23, became unable to keep anything down in July 2017, with him now vomiting up to eight times a day.

The care worker, who has lost 38kg (83lbs) due to the disorder, has been in and out of hospital for the past two years, with medics being baffled as to what is wrong.

Forced to watch his one-year-old daughter Freya grow up while lying in his hospital bed, Mr Lancaster, of Bideford in Devon, became so low he could see ‘no way out’. 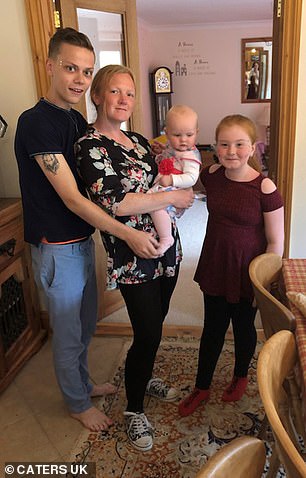 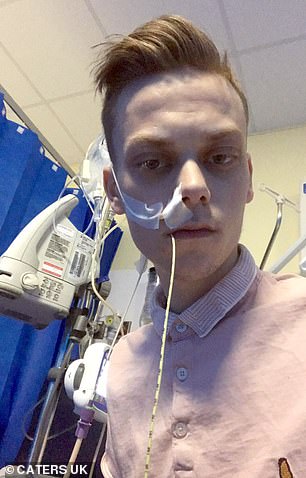 Kurtis Lancaster (pictured left with his partner Michelle, daughter Freya, one, and step daughter Tiffany, 10) suffers from a mysterious condition that causes him to vomit every time he eats. Since July 2017, he has been in and out of hospital, and is fed via a tube (seen right)

Speaking of the ordeal, Mr Lancaster said: ‘This has been one of the most painful experiences of my life, I can’t get any answers, and nobody knows what is wrong with me.’

‘In July 2017 I started to throw up anything I tried to eat or drink, my partner and I just thought I wasn’t eating or sleeping properly.

‘But it kept happening no matter how much I looked after myself.

‘Whenever I eat or drink anything, it comes back up 10 minutes later, which can happen up to eight times a day.’

By August 2017, Mr Lancaster had lost so much weight he collapsed at home and was unable to move his legs.

His partner Michelle, 37, was forced to perform CPR while they waited for paramedics.

Mr Lancaster, who is step father to 10-year-old Tiffany, said: ‘I collapsed into a heap of skin and bone.

‘It felt like I was being crushed by death himself, I could barely breathe and my legs were frozen stiff.’

Since then Mr Lancaster has been in a cycle of a few days at home followed by weeks in hospital, where he is fed via a tube.

‘Watching my daughter grow up from hospital has been heart-breaking,’ he said.

‘On my worst day I ripped all the tubes out of my body and wrote my own will, I couldn’t see a way out.

‘I will never forget eating something in hospital and violently vomiting everywhere, at this point I burst out crying feeling ashamed and embarrassed.’ 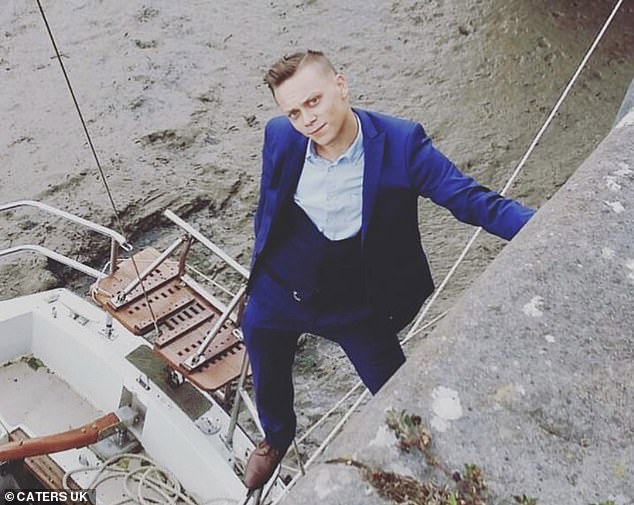 Mr Lancaster (pictured in his native Devon) vomits up to eight times a day. After numerous tests and meetings with specialists, medics are baffled as to what is behind his condition 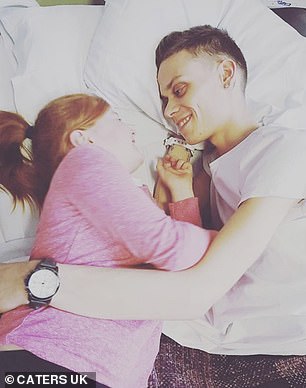 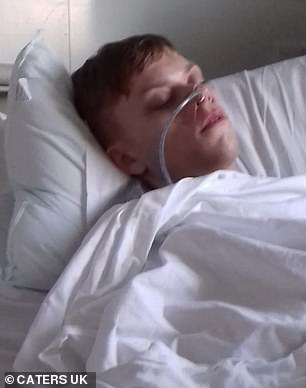 Mr Lancaster ‘doesn’t know where he’d be’ without his ‘perfect partner’ Michelle (pictured together left). Mr Lancaster (pictured right in hospital) has lost 38kg (83lbs). He reached a point where he ‘couldn’t see a way out’ and ripped his feeding tubes out before writing a will 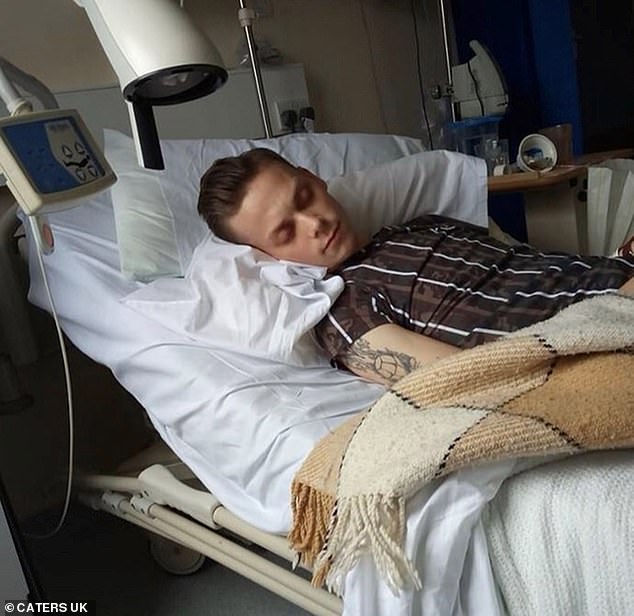 Pictured in hospital, Mr Lancaster claims he has been told to seek alternative treatment, which led him to speaking to specialists in the US. Medics have reportedly said he requires a stomach transplant and possibly a new heart, but at a cost of £45,000 ($55,898)

WHAT IS A STOMACH TRANSPLANT?

Stomach transplants are rare and usually involve a patient receiving a ‘new’ digestive system, including a pancreas, spleen, liver and intestines.

This has been carried out due to severe bowel obstruction.

Stomach transplants alone are rarely performed due to the organ being ‘non essential’ – i.e. people can live without a stomach if they are fed via a tube.

Transplants require patients take drugs, usually for the rest of their life, to suppress their immune system.

These increase their risk of infections and even cancer.

Transplants are therefore only carried out when necessary to prolong life or improve quality of life.

Anne Paschke, a spokesperson for the Virginia-based Organ Procurement and Transplantation Network, told NBC News 45 multivisceral (digestive system) transplants were performed in the US in 2005.

And 36 were carried out between January and June 2006.

At the time, around 300 of these transplants had reportedly been done nationwide, of which half were at a hospital in Miami.

It takes around three months to recover from the procedure.

Most of the patients (65 per cent) are children.

Mr Lancaster claims he has had dozens of appointments and tests, but no specialists are able to diagnose him.

‘I chatted with psychiatrists about anorexia and any other mental-health issues, they were all ruled out as possibilities,’ he said.

‘I have had hundreds of hospital admissions and uncountable medical tests that have left doctors unable to determine what is going on.’

Mr Lancaster has reportedly been told he needs to seek alternative treatment, which led him to speaking to specialists in the US.

Medics have said he requires a stomach transplant and possibly a new heart as well.

Writing on his GoFundMe page, Mr Lancaster said: ‘I suffer with dangerously low potassium levels, which when too low cause heart failure.

‘The constant low potassium is causing strain on my heart and it cannot cope with it.

‘[It] will eventually collapse under the pressure and may not be restarted.’

Mr Lancaster, who cannot afford the treatment, is asking the public for help.

‘I just want to be able to look after my beautiful family and I can’t keep going on like this, this is no quality of life,’ he said.

‘Hopefully we can raise this money and I can be the father I was, and want to continue to be, for my children.

‘I have an amazing family, two daughters and a perfect partner who without I’m not sure where I would be.’

Michelle added: ‘This has all been so difficult, we just want to be able to be a family again.’

If you or someone you know has contemplated or is concerned about suicide, you can speak to professionals for confidential support: