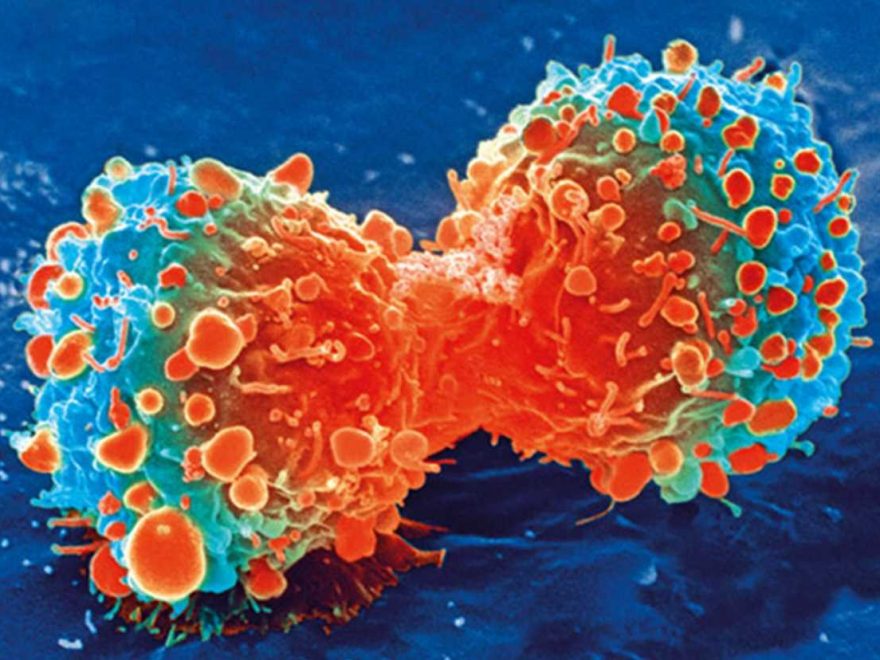 Scientists have genetically engineered immune cells, called myeloid cells, to precisely deliver an anticancer signal to organs where cancer may spread. In a study of mice, treatment with the engineered cells shrank tumors and prevented the cancer from spreading to other parts of the body. The study, led by scientists at the National Cancer Institute’s (NCI) Center for Cancer Research, part of the National Institutes of Health (NIH), was published March 24, 2021, in Cell.

“This is a novel approach to immunotherapy that appears to have promise as a potential treatment for metastatic cancer,” said the study’s leader, Rosandra Kaplan, M.D., of NCI’s Center for Cancer Research.

Metastatic cancer—cancer that has spread from its original location to other parts of the body—is notoriously difficult to treat. Dr. Kaplan’s team has been exploring another approach: Preventing cancer from spreading in the first place.

Before cancer spreads, it sends out signals that get distant sites ready for the cancer’s arrival—like calling ahead to have the pillows fluffed in your hotel room prior to arrival. These “primed and ready” sites, discovered by Dr. Kaplan in 2005, are called pre-metastatic niches.

In the new study, the NCI team explored the behavior of immune cells in the pre-metastatic niche. Because Dr. Kaplan is a pediatric oncologist, the team mainly studied mice implanted with rhabdomyosarcoma, a type of cancer that develops in the muscles of children and often spreads to their lungs.

To study the pre-metastatic niche, the researchers looked at the lungs of the mice after tumors formed in the leg muscle but before the cancer was found in the lungs. The immune system’s natural ability to attack cancer was present but actively stifled in the lungs, the NCI scientists discovered. There were few cancer-killing immune cells, but many cells that suppress the immune system.

Myeloid cells, in particular, were abundant in the pre-metastatic niche and continued to gather there as the cancer progressed. Myeloid cells are part of the body’s first response to infection, injury, and cancer. When they detect a threat, they normally make interleukin 12 (IL-12), a signal that alerts and activates other immune cells. But myeloid cells in the lung pre-metastatic niche instead sent out signals that told cancer-fighting immune cells to stand down, the researchers found.

Together, these features of the lung pre-metastatic niche allow cancer cells to thrive when they spread there, Dr. Kaplan explained.

The NCI team wondered if they could take advantage of myeloid cells to spur the immune system into action in the pre-metastatic niche by changing the message they deliver. So, they used genetic engineering to add an extra gene for IL-12 to myeloid cells from lab mice.

“We chose myeloid cells to deliver IL-12 based on their unique ability to home to tumors and metastatic sites,” Dr. Kaplan said. “With IL-12, we’re turning the volume up on a message that’s been quieted.”

In mice with rhabdomyosarcoma, these genetically engineered myeloid cells, nicknamed GEMys, produced IL-12 in the primary tumor and in metastatic sites. As hoped, the GEMys recruited and activated cancer-killing immune cells in the pre-metastatic niche and lowered the signals that suppress the immune system, the researchers found.

“We were excited to see that the GEMys ‘changed the conversation’ in the pre-metastatic niche. They were now telling other immune cells to get ready to fight the cancer,” Dr. Kaplan said.

As a result, mice treated with GEMys had less metastatic cancer in the lungs, smaller tumors in the muscle, and they lived substantially longer than mice treated with nonengineered myeloid cells. The researchers found similar results when they studied mice with pancreatic tumors that spread to the liver.

The NCI team also found that, in combination with chemotherapy, surgery, or T-cell transfer therapy, the effects of the GEMy treatment improved. For example, giving mice a single dose of chemotherapy two days before the GEMy infusion cured mice with rhabdomyosarcoma, meaning the treatment completely eliminated all traces of cancer for more than 100 days.

“I have never seen that kind of durable cure in my research before. Typically, cancer growth will slow down after treatment but then it will come back with a vengeance,” Dr. Kaplan said.

As a final step in their study, the researchers created GEMys from human cells grown in the lab. In lab dishes, the genetically engineered human cells produced IL-12 and activated cancer-killing immune cells.

The team plans to test the safety of human GEMys in a clinical trial of adults with cancer and, if it proves to be safe, in children and adolescents with cancer. There are many unanswered questions they hope to explore, including whether the homing pattern of GEMys is similar in humans and mice, and whether IL-12 from the GEMys will cause side effects in patients.

But the researchers are reassured by several factors. “We are delivering a small amount of IL-12 that’s similar to the body’s natural response to an infection, creating a ripple effect of immune activation against the cancer. In addition, GEMys don’t multiply rapidly inside the body, so they’re not flooding the system with IL-12,” explained Sabina Kaczanowska, Ph.D., first author of the study. These are important considerations because high levels of IL-12 throughout the body can be toxic.