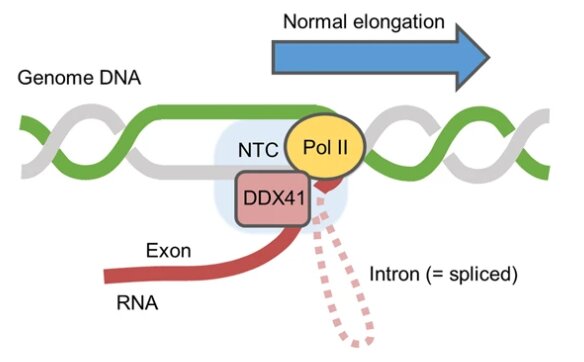 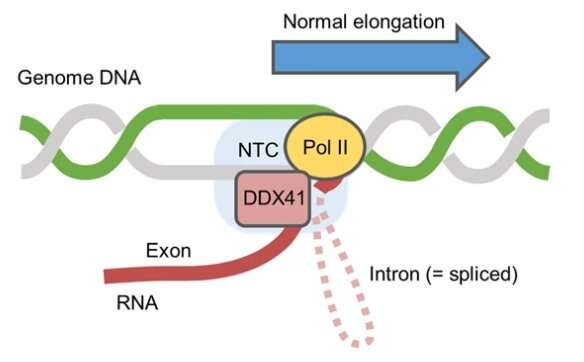 The gene DDX41 encodes the nuclear enzyme, DEAD-box-type RNA helicase. Mutation of DDX41 leads to hematopoietic cancers. However, the mechanism underlying this malignancy development is unclear. To this end, researchers from Japan characterized the functional significance of DDX41 in great detail. Their findings reveal that DDX41 serves crucial functions in transcriptional processes, RNA splicing, and overall genomic integrity maintenance. The findings may hold significance in treating hematopoietic malignancies.

Mutations in the gene DDX41 can lead to cancer of the hematopoietic cell progenitors (blood cell precursors) and include acute myeloid leukemia (AML) and myelodysplastic syndromes (MDS). However, the mechanisms underlying malignancy development are poorly understood. For bridging this gap, a group of researchers from Japan, led by Prof. Hirotaka Matsui from the Graduate School of Life Sciences, Kumamoto University, conducted a comprehensive study to unravel the detailed functional mechanisms of DDX41.

“Our research group is investigating the DDX41 gene, which is known to be one of the causative genes of AML/MDS. Focusing on this gene, we have analyzed the details of the damage caused to cells by the mutation of this gene,” says Prof. Matsui. Their findings, co-authored by multiple researchers including Prof. Toshiya Inaba from the Research Institute for Radiation Biology and Medicine, Hiroshima University, and Dr. Akihiko Yokoyama from the Tsuruoka Metabolomics Laboratory, National Cancer Center, were published on October 14, 2022 in the journal Leukemia.

Through a series of cellular assays on the parental K562 cell line and the DDX41-mutant R525H-expressing cell line, the researchers showed that DDX41 plays an important role in mRNA synthesis by binding to the 5′ splice site (SS) of the coding RNA. Further experiments revealed that DDX41 interacts with proteins related to RNA splicing, the molecular process essential for generating mRNA. These experiments reiterated the functional importance of DDX41 in transcriptional processes. 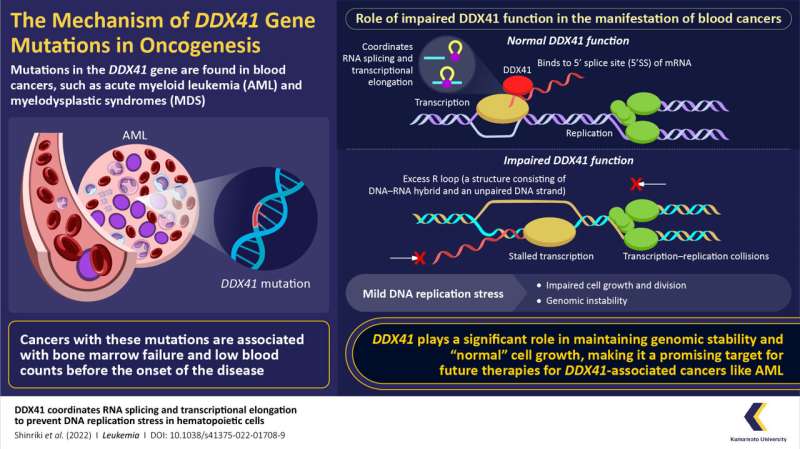 To further characterize the functional significance of DDX41 and understand the mechanism underlying malignancy development, the researchers observed the effects in DDX41-knockdown cells, where the levels of DDX41 were reduced. These experiments revealed that the DDX41-knockdown cells had abnormalities in DNA replication and mitosis (the process by which cells divide). The researchers also observed increased formation of R-loops, which are structures consisting of DNA:RNA hybrid and an unpaired DNA, in the knockdown cells.

These results were also consistent with the results of experiments in which the DDX41 function was inhibited. Upon inhibition, there was mild replication stress, eventually leading to disruption in the cell cycle due to delayed G2-M transition, a crucial check-point in the cell-cycle. Furthermore, the experiments suggested that DDX41 regulates the pausing of RNA polymerase II, an essential process for executing successful transcription.

Taken together, these results shed light on the functional significance of DDX41 and reveal its role in maintaining genomic stability. The findings will help our understanding of the mechanisms underlying the development of hematopoietic malignancies in DDX41 mutations, which may ultimately contribute to the therapeutic domain.

Regarding the future implications of their study, Prof. Matsui says, “In the future, we will elucidate detailed mechanisms by which hematopoietic malignancies develop. If we can establish a molecular target therapy, such malignancies will have greater potential for cure.”