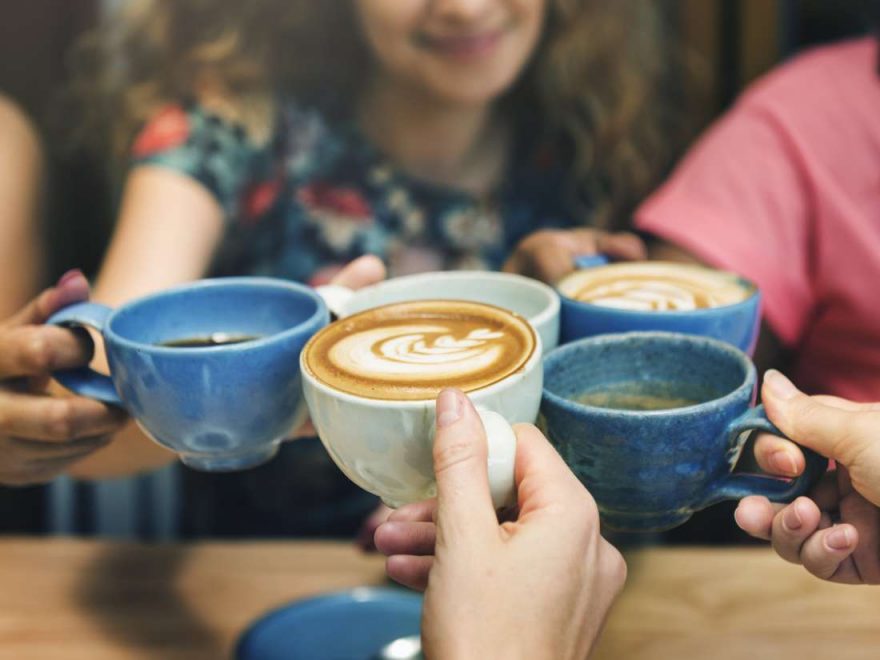 I count myself lucky to work with Medical News Today; I work alongside colleagues who share my love of coffee.

Our coffee pot is almost always full, and, within healthful limits, we refill our cups regularly.

And now, it seems that the top-notch teamwork that we’re so proud of may, at least in part, be fuelled by our appreciation of coffee.

This is not just because we automatically bond over a steaming mug of coffee, either.

As the results of a new study, led by researchers at Ohio State University (OHU) in Columbus and published in the Journal of Psychopharmacology, suggest, individuals who drink a cup of coffee before engaging in a team task engage more constructively with peers.

Amit Singh and colleagues at OHU conducted two related experiments to see how coffee affects the way in which people in a team relate to each other, as well as how they perform during team-based tasks.

For the first experiment, the researchers recruited 72 coffee-loving undergraduate students, all of whom were given strict instructions not to consume any caffeinated beverages before this task.

The participants were told that this would be, primarily, a coffee-tasting experiment. They were all randomly split into groups of five individuals.

Half were offered a cup of coffee (12 ounces of coffee containing approximately 270 milligrams of caffeine) and asked to rate the taste, after which they were assigned “filler” activities for about 30 minutes, while the caffeine took effect.

Then, controversial discussion topics were assigned to all the groups of participants, in which they were instructed to participate for 15 minutes.

Half of the participants were offered coffee only after this task, to compare their engagement with that of peers who worked under the influence of caffeine.

At the end of the group discussions, they were all asked to evaluate other group members’, as well as their own, contributions.

The researchers found that the participants who had drunk coffee before engaging in the group discussion tended to rate both their own, as well as their team members’, performance more positively than the individuals who were only allowed to have coffee after this task.

It may all be due to increased alertness

In the second experiment, the researchers tweaked the conditions. This time, they worked with 61 participants — all undergraduate students — who were all offered coffee at the beginning of the task.

Once more, the students were split into small groups and asked to discuss a controversial topic. And again, after the task, they had to rate their own and their team members’ performance.

The experiment confirmed the previous results: the participants who had drunk caffeinated coffee tended to evaluate themselves and others more positively.

But why does this happen? The increased levels of alertness that caffeinated drinks bring about may have something to do with it, the study authors hypothesize.

After the experiment, all participants were also asked to report how alert they felt, and those who had ingested caffeine felt themselves to be more energetic than the students who ended up drinking decaf brews.

So, the scientists concluded that it may be caffeine-related alertness that makes people feel more positive about themselves and others in a group setting.

“We suspect that when people are more alert they see themselves and the other group members contributing more, and that gives them a more positive attitude,” says Singh.

‘An interesting set of findings’

The findings intrigued the researchers, who now ask themselves whether other stimulant activities, such as exercise, could lead to the same effects. They are interested in exploring this possibility in future studies.

However, the findings did not only focus on the participants’ perception of individual performance in a group task; it also looked at their ability to stay on point during the activity.

As it turns out, the volunteers who had drunk regular coffee prior to participation tended to talk more, but they were also more focused on their given topic of discussion and did not ramble as much as participants who had not ingested caffeine.

“They’re talking about more relevant things after drinking caffeinated coffee,” states Singh. Take that, alongside the fact that coffee also made everyone feel more positive about everyone else’s contribution, and coffee seems to work as a good teamwork enhancer.

“Even though [the caffeinated coffee-drinking participants] are talking more, [both] agreeing and disagreeing, they still want to work [together] again,” Singh notes.

This is because the study volunteers who drank non-decaf coffee reported being willing to work with their group again, despite any differences of opinion.

“[W]e believe that we have an interesting set of findings with respect to how a group performs in a task that requires the exchange of ideas between people when the participants have caffeine in their system vs. not,” the researchers conclude.