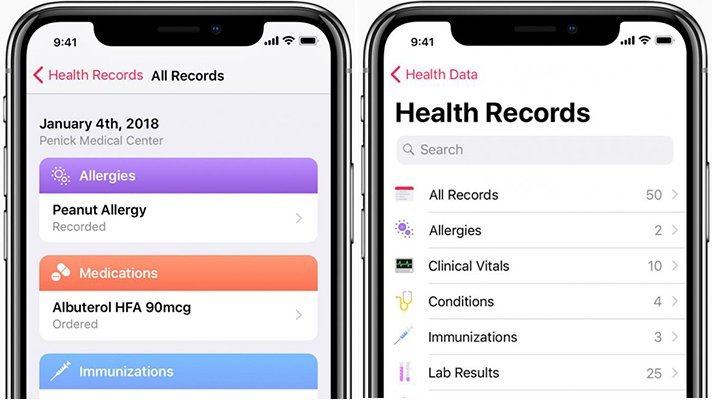 Just two months after announcing the beta, Apple is now launching its Apple Health Records feature into the wild, the company announced today. The feature will aggregate existing patient-generated data in a user's Health app with data from their EHR — if the user is a patient at a participating hospital.

In addition to the 12 health systems announced with the beta, 27 more are ready to launch the service, for a total of 39. Anyone with an iPhone and iOS version 11.3 will be able to download the patient-facing side of the feature by updating the Health app in iOS.

The feature will use HL7's FHIR (Fast Healthcare Interoperability Resources) specification. Users will be able to see things like allergies, medications, conditions, and immunizations, as well as the sort of things they might check an EHR patient portal for, such as lab results. They can be notified when the hospital updates their data. The data will be encrypted, and users will need to enter a password to view it.

In the blog post, Apple detailed the experiences of two clinicians who have been using the system: Dr. Robert Harrington, cardiologist and chairman of the Department of Medicine at Stanford, and Dr. Paul Testa, CMIO at NYU Langone Medical Center.

Of note, Testa has adapted the system to include Apple Watch notifications for 35 physicians at NYU, who can set the EHR in advance to send particular lab results to the watch face, so they can respond quickly to patients who need care most urgently.

Apple's long-awaited announcement of the health records tool in January sparked a healthy debate in the digital health community about whether Apple could succeed where others have failed in bringing patient's EHR data to their own smartphones. Time will tell, but the number of hospitals and clinics participating — which number in the hundreds when you account for the size of some of the participating health systems — bodes well for the success of the experiment.