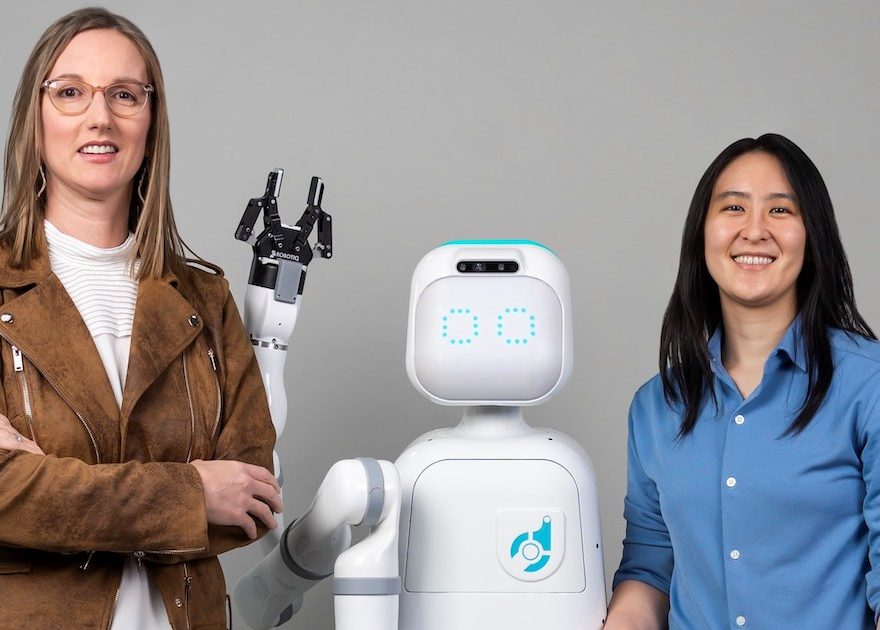 Frontline healthcare workers are stretched thin in the wake of the COVID-19 pandemic as many hospitals contend with nursing shortages and provider burnout.

Diligent Robotics, which earlier this week announced a $30 million Series B funding round, aims to lessen some of that staffing burden by automating routine delivery tasks with its Moxi robot. The company’s CEO and cofounder, Andrea Thomaz, sat down with MobiHealthNews to discuss how Moxi works, what it takes to onboard a robot hospital worker and how Moxi’s design informs its interactions with humans. (This interview has been edited for clarity and length.)

MobiHealthNews: Can you tell me a bit about how Moxi works and how it assists healthcare providers in hospitals?

Andrea Thomaz: Moxi is what’s called in robotics a mobile manipulation robot. That just means it’s got a mobile base, an arm that can manipulate things in the environment and a socially expressive head that lets people know what Moxi is doing.

Moxi is doing fetch-and-deliver tasks for hospital staff. We like to say that Moxi can be installed to be pretty flexible and go point-to-point in the hospital. And we end up saving people a lot of time by taking over all of the ad hoc delivery tasks that happen throughout the day.

So it’s delivering lab samples from between the nursing unit and the central lab, or taking up medications from the pharmacy, lightweight equipment from central supply, or a lunchbox from food and nutrition. So it’s just a lot of things that fall onto the plates of people that have much better things to do.

MHN: Why did you decide to focus on implementing robotics in healthcare, particularly for that fetch-and-delivery space?

Thomaz: My cofounder and I are both deep experts in robotics, not in healthcare. But our expertise is in human-robot interaction, and in particular, thinking about robots interacting with a team of people. So we were looking for a place to really develop that teamwork robot.

That’s really the exciting part to us as roboticists, it’s finding that collaboration between a robot and a team of people. And so we work with hospital leadership to identify all of those opportunities, and strategize which ones are the ones we want to hit first. And then we roll out newly automated workflows to all those teams.

MHN: So this is personalized depending on what each hospital thinks they need, or what’s most important to them, or what their problem areas are in their hospital?

Thomaz: Yeah, and you’ll see that we actually redesigned our software a little bit to be even more flexible from when we first deployed it. We learned that we didn’t need to have special software for lab deliveries and another piece of software for pharmacy, we actually wanted it to be more generic than that, so that we can really just think about the whole hospital as any waypoints that people wanted to set.

Then we could start sending the robots to and from any of them. And what that allows us to do is let the hospital really decide what is most important, and we work with them on that kind of change management.

We do see that there’s a lot of consistency across organizations about the typical clinical workflows that have challenges. For example, if you’re an infusion clinic, then getting those infusion meds for your chemo patients. Those are meds that are mixed just in time, and so you want to get them to your patient as soon as they’ve been mixed.

And so that’s a great example of a workflow that is typically hand-carried medications in hospitals. We have a lot of interest in automating that workflow, because you’re taking either a valuable pharmacy tech or a valuable nurse’s time to run infusion meds.

But what is going to be more strategically a priority is different from hospital to hospital. It would be dependent on their patient population, dependent on their layout. If you have a layout such that you have three nursing towers, and the main pharmacy is in one of them, then you better believe that your two nursing towers don’t have the pharmacy in the basement. They’re struggling.

And so that may be like the highest value workflow for you, because that’s where you see a lot of your staff running around.

MHN: How do providers usually respond to Moxi when you’re first starting to implement it? Is there kind of a learning curve for them?

Thomaz: We’ve actually been pleasantly surprised at how accepting people are of the technology. I think, from the end user’s [perspective], like the people that are actually using Moxi for deliveries, they see right away the value.

When we first arrive, we always bring the robot around on an introduction. It’s usually the nursing leadership that’s rounding with Moxi and introducing Moxi to the team and saying, “Hey, Moxi is joining the team. This is why we’ve brought this robot here. We really value your time, and we want to find ways that we can have this robot doing things for you, instead of having you running around.”

And so then everybody gets it. But I think that first day, there’s a little bit of like, “Wait, what? This actually works?” It feels a little bit sci-fi to people.

After we get the robot mapped and programmed and we’re ready to go live, we spend another two weeks or so doing practice deliveries and tasks with the staff. Moxi will bring water to everyone or deliver candy or let people send notes back and forth to each other. So we do a little bit of just giving everybody a chance to try it in a low stress, low impact kind of way. And that way everybody feels really comfortable on day one.

We put a lot of thought into the design. I think part of that was because we want it to be something that’s nice to be around, but there’s also a functional aspect for the way the face is and the way the head moves in particular. Some of the features that we designed into Moxi to make it fit into the environment better are just the footprint, how big the robot is.

It’s pretty small compared to a delivery robot that you would see in a warehouse. We really want it to be small enough to fit everywhere that people go. We also made sure that the robot stands about four and a half feet tall. We wanted to make sure it wasn’t taller than anyone. There’s still some really short people that will run into that, but it’s generally kind of unassuming. But it’s large enough to carry a significant set of things.

And then the head itself moves around. It’s a little bit subtle why this is important. A couple of good examples are when the robot is coming down the hallway and is preparing to turn left, it’ll look before it goes somewhere. So everyone in the environment knows this robot is going to turn left, not right.

Same is true for when the robot is going to reach out and push a button to open a door for example, the robot will be standing there in front of the door, and then it kind of looks at the button and pushes it. That notion of people being able to infer what the robot’s thinking about or what the robot’s doing is a big part of the design.

MHN: I know that it makes little “meep” sounds, right? Is that how it communicates with the nurses or other providers?

Thomaz: So we do have meeps and beeps and lights and things. We try to limit the amount of natural language English interactions that it’s having with people. We just don’t want to over-communicate its intelligence.

There are a few different times where it will say a specific phrase, like “I’m here for a pickup,” or “I’m getting off on floor number three.” It’s just the easiest way to communicate that information.

There’s also an iPad on the front of the robot, and so some of the ways that people interact with it are on screen as well.

MHN: What are some of the challenges that you had to overcome when using Moxi in a healthcare setting?

Thomaz: People are fast. They’re moving around, they’re changing where things are located, they’re picking things up and moving them around. So the robot cannot assume that things are going to stay the same.

So the software that we write – the AI, machine learning perception software – is really geared at this: Look, I’m going to assume that I know where the walls are in the hospital, so I can make a plan of how to get from one place to another. But 60 times a second, I have to evaluate the situation to see if there’s a person walking by or a bed in the hallway.

The other thing that’s really different from a warehouse – where you have just an open environment where the robot is trying to get from one place to another – is, in the hospital we have to make use of the infrastructure of the hospital. So we have to be able to open doors and be able to ride elevators. And so that’s where the use of the arm and the manipulation comes into play.

MHN: So you just announced your $30 million Series B. How are you planning on using that investment?

Thomaz: We are excited to really have the opportunity to scale the team, both the engineering team and the sales and operations team, to meet the growing demand.

Over the last 12 months, we’ve seen a dramatic increase in demand. Before the pandemic and even in the first year of the pandemic, we were really more of an innovation project. If somebody was reaching out to us to work together, it was because they had an innovation budget that they were looking to do something cool and new.

Now, we’re having CIOs reach out to us on our website, like cold outreach, saying, “Hey, I need to implement a robotic strategy for my hospital. I want to hear about your solution.”

So I would say that robotics and automation are becoming just much more mainstream in hospitals and healthcare. And so we’re excited to expand and be able to meet that demand and just get more robots out faster.

Contributed: Will upstarts lead gastroenterology to a more virtual future?