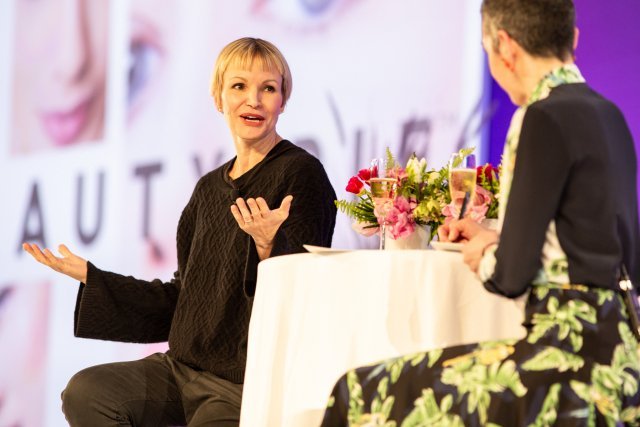 For Marcia Kilgore, each entrepreneurial pursuit she’s launched — and there have been many — was fueled by passion. There’s also an element of FOMO involved.“I don’t want to be left out,” Kilgore said with a laugh. “There’s a lot of fun things going on…a lot of challenges that are continually coming . There’s so much new information. The world is changing at light speed in terms of how you reach consumers.“I never really call them ‘consumers,’” she continued. “People are customers — members, in the instance of Beauty Pie,” said Kilgore, referring to her most recent start-up. “I love to be connected to them; it’s like a big family for me when I create a new idea.”Her first business venture was Bliss, a spa group that began as a one-room studio called Let’s Face It, in New York City. “People would come in for facials,” she said. “If someone showed up early, they actually had to sit on the floor in the hallway and wait.“I was maybe 21, and I had terrible skin,” she said. “So I had gone to skin-care school to try and fix my own face. Back then we didn’t have such a plethora of great products.”She considers Bliss revolutionary, since it was a brand with a tone and voice that resonated with young female consumers. LVMH Moët Hennessy Louis Vuitton took note and purchased the activity.Kilgore’s other ventures included Soap & Glory, a brand that was sold to Walgreens Boots Alliance, and footwear label called FitFlop, in which she still retains a majority stake. Soaper Duper is an ecologically conscious bath-and-both label carried now in the U.K. And Beauty Pie launched about 16 months ago.With the aim of democratizing access to luxury beauty products, Beauty Pie offers a $10 monthly membership that gives users access to buy products at factory-direct costs.Kilgore constantly spouts book references. When asked about her creative process, she referred to Adam Grant’s “Originals.” “His book talks about people who are disruptive or come up with new ideas as people who are outsiders in their industry — which I am, certainly,” she said. These are people, Kilgore explained, who always forge their own path.In Malcolm Gladwell’s “Outliers,” the writer states that key to success in any field is 10,000 hours of practice, something she espouses.“When you are someone who comes up with ideas quite easily, you don’t actually know how you’re doing it,” said Kilgore. “It just happens. I think the information-gathering is how you live, and you create these data points. And then all the data points come together. I call it ‘connecting the dots.’”Kilgore perpetually scans everything around her for information. Beauty Pie came from “a million points of data, of the things that I’ve experienced and the things I saw the world experiencing. I don’t like to do things the same twice — I had already done a spa business, I had already done a retail business.”Kilgore cited Ray Dalio’s “Principles” in which he “says that the meaning of life is evolution. And then there’s Blaise Pascal, who says that the meaning of life is to be alive. So for me, to really be alive is to evolve. Every time I come up with a new business idea, I do want to do it better than the one that I did before,” said Kilgore.The reasons behind Beauty Pie were manifold. After Soap & Glory’s sale, a European cosmetics supplier invited her to an event. Kilgore at the time needed to buy skin care in a duty-free shop but didn’t want to pay $80 for a moisturizer that costs $4 to make.She believed a lot of other women similarly felt the desire to get luxurious, qualitative high-tech moisturizers with a reasonable price tag.In this age of Instagram, people, she believes, are brands unto themselves. “So why should they be paying 10 times the cost of the product from a factory to retail when they actually don’t care about that brand anymore?” asked Kilgore.A third factor influencing Beauty Pie was when she was given a free bag of beauty products — probably worth $5,000 at retail — from the supplier. Kilgore said she thought: “What if I could bring all the women on this trip with me? Wouldn’t that be incredible? And that’s what Beauty Pie is.“Our particular USP is that we gather the best formulations from the world’s best luxury factories and bring them to customers to show them the price that they cost to make — transparently,” said Kilgore.The brand’s customers are of all ages and generally well-educated. They tend to like weighing in on social media, too. Kilgore ran possible candle names by them, for instance. “You get different answers in a focus group,” she said. “It’s a fantastic tool for us.”For the entrepreneur, it’s key to make a brand that’s remarkable (the main takeaway from Seth Godin’s “Purple Cow”). “When layers come in between me and the people — my people — I’m much more uncomfortable,” she said. “I guess I’m not a good faker.”Kilgore added: “I think we all should be trying to build our businesses on what’s best for the consumer.”