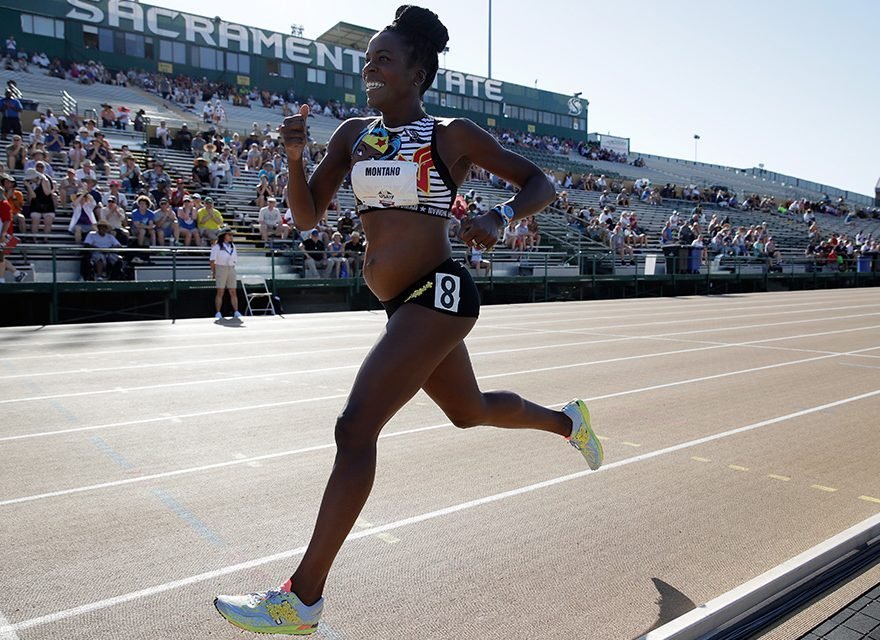 Alysia Montañois at it again. The middle distance runner once again competed in an 800-metre race while pregnant, this time with her second child.

RELATED: 10 Tips To Max Your Health From An Olympic Runner

On Friday, June 23, the Olympian ran at the USA Track and Field Outdoor Championships in Sacramento, where she wore a Wonder Woman top, along with a flower in her hair, her signature accessory.

“I wanted Wonder Woman to represent me,” said Alysia. “When I found out [Gal Gadot] filmed half the movie five-months pregnant, I said, ‘I for sure am signing up for USA nationals.’”

Alysia first competed pregnant in 2014, showing women that pregnancy does not have to limit your ability to exercise.

“[In 2014] women let me know that my journey and my story had inspired them in so many different ways,” the 31-year-old said on Friday. “I think there’s something about coming out to any venue, not really expecting to win, but just going along with the journey and seeing what comes out of it. And that’s the most beautiful part for me, being a track and field athlete, the platform that I have, I feel so responsible to be a representative of people who don’t have the same platform, don’t have the same voice that I do.”

RELATED: She was told she would never swim for Australia

About last night… 2017 USA Nationals with baby #2 at 5months pregnant. I have some pretty awesome maternity photos from both pregnancies ?#Wonderwoman #ShesAllOFUS #beyourjourney

While Alysia did not win — she came in last in her heat with a time of 2:21.40 — she was able to share the experience with her daughter, Linnea, who cheered her on while wearing a “Strong Like Mum” t-shirt.

“I go, ‘Mum is going to run with your sibling in her belly,’” Alysia recalled of telling her two-year-old about the race. “’I did that with you, too’. And [Linnea] was like, ‘Yeah, it was sticking out!’”

This article originally appeared on Womenshealthmag.com.

Ready for a challenge? Sign up for The Sun-Herald City2Surf