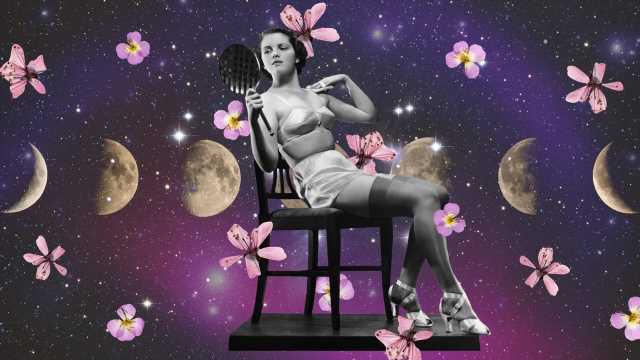 As someone who happily follows a hashtag called #PiscesMemes on Instagram and will almost always click on an article about which nail polish or lipstick I should buy according to my natal chart, I can confidently say that I enjoy astrology. But that doesn’t necessarily mean that I fully understand it, or even that I’ve completely bought in. I take most things I see about phases of the moon, sun signs, and Mercury retrograde with a grain of salt, but I can also admit that that might be because I have a lot to learn about all of it. When I set up a time to speak to Lisa Stardust of Lisa Stardust Astrology about how the phases of the moon, in particular, can affect how we feel about ourselves and how we can use this knowledge to shape our beauty and skin care routines, I had no idea what she’d say. Something about tides, maybe? Full moon rituals? Turns out, I was sort of right.

“The moon rules the tides of the ocean. Humans are made of 60 percent water,” Stardust explained. “Therefore, the moon has a huge effect on us, particularly the lunar phases. As the moon orbits the earth, it forces us to focus on aligning ourselves to different natural flows of the universe.”

While I was still a little unsure that specific phases of the moon would have a notable effect on how I felt in my body, I was curious what, exactly, might happen if I switched up my beauty routine based on what was going on in the sky. I also asked Stardust about the week ahead, in lunar terms, and the ways in which it might make sense to align my beauty habits with what was going on in the sky. She graciously broke down the next seven days, pointing out a few key days for beauty experimentation and why they’d have a particularly profound effect on me.

Excitingly, I kicked off this experiment on a full moon. I didn’t yet know why full moons were impactful, but they seemed fancy and mysterious. Luckily, Stardust broke down for me what they actually can mean.

“Full moons are a time of letting go and releasing,” she shares. “It’s time to slow down, which means that our skin can use a break too. Being that this luminary is in Virgo, it’s important to focus on self-care. Do a face mask to detox your face while you take a bath with Epsom salts — flowers optional.”

This Saturday was the first day I had in a long time that came with only a very short to-do list instead of an endless schedule of obligations and errands. I took the day off of working out, completed exactly zero errands, and instead tried pampering myself at home. I lit candles, took a long, hot shower, and used my favorite body scrub (Soap & Glory’s Smoothie Star) and lotion (Necessaire’s Body Lotion) afterward. I opted to not wear makeup for the day, as well, and instead prioritized taking my time with skin care and body care. It felt good — like taking a deep breath. I started to think that maybe there was something to this little experiment.

If a full moon in Virgo sounded fancy, a waning gibbous sounded downright serious to me. Stardust quickly explained that I was a little off about that, too. She described this lunar phase as a time to focus on thoughtful and serious reflection rather than rest and relaxation.

“Our senses are heightened, which means we can take on a lot of other people’s energies,” she says. “Using a rose quartz face roller with organic oils and creams will help calm anxieties and allow us to find a chill moment to center ourselves.”

I didn’t have a rose quartz face roller for this day, but I did make sure to apply a generous amount of my favorite face cream (Weleda’s Original Skin Food) and take some extra time to massage it into my face, neck, and hands. This felt great, of course, but what really struck me is that this did end up being quite a heavy day for me, one where I felt a lot of pressure from others and had trouble relaxing. Stardust’s description of the possible effect of the moon rang true, and it’s also true that the facial massage helped.

Like most people who are only vaguely knowledgeable about astrology, I know almost nothing about signs other than my own sun sign, so I was surprised when Stardust informed me that Libra is the sign that “rules the skin.” Who knew?

“This is a great time to do a quick face steam with a hot compress and add organic oil or cream to the skin to use with a rose quartz face roller,” she said. “This will not only aid in repairing and healing skin, but it’ll also make you feel better about yourself and boost your confidence.”

Stardust explained that rose quartz is the crystal associated with Venus, which is the planetary ruler of Libra (though facial rollers of all kinds can help increase circulation and minimize swelling). While I still didn’t have the roller, I was able to do the rest of her recommendations, and tried to focus on repairing and healing lotions and oils. I took the day to focus on using nourishing oils (my favorite is currently NOTO’s Deep Serum) on the parts of my body that I usually forget about, including my elbows, knees, and feet.

“It’s time to transform your routine,” Stardust said of this particular time period before adding the caveat, “Don’t get too wild here. The disseminating moon wants us to take it easy. Using a new product is advised, but nothing major.”

Luckily, I had just received a fun new product in the mail that seemed a little on the bold side for me, without being too drastic or permanent. After spending a year trying (and failing) to perfect the at-home manicure, I was ready to admit defeat. Enter: Static Nails’ press-on nails. Fake, self-adhesive nails were admittedly pretty new to me and I had worried I would hate using them — I thought maybe they wouldn’t feel like me, or they’d be impossible to apply (or worse, remove).

Ultimately, though, I was glad for the excuse to take a chance. They made me feel great, and I woke up the next morning feeling more confident than I had in a while. I also was happy I bought more than one set, because I experimented with another in a different shape and style later in the week, which gave me yet another boost of confidence.

First of all: Would I eat a pizza called a “balsamic moon”? Yes, yes I would. Turns out, though, that a balsamic moon is actually a symbol for a time of healing. For me, Friday ended up being a day of recharging and refocusing, so this checked out.

“A moisture mask to repair dry or damaged skin will be helpful,” Stardust suggested in terms of beauty for this day. “Being that the moon is in Sagittarius, you can choose a fun product to try. Maybe one in which the smell takes you away to a foreign place or another space [and] time.”

To follow Stardust’s advice, I took the chance to try out a product I loved but hadn’t reached for in a long time, Patchology’s Flashpatch Illuminating Eye Gels. For many years, I used these soothing and brightening eye patches after doing dramatic eyeshadow looks (a habit that seems like a thing of the past these days). I had forgotten just how much my skin loved the hydrating and illuminating effect of the eye patches, though, and it also reminded me that experimenting with bold makeup again might not be such a bad idea.

Ultimately, the experiment of tweaking my beauty routine based on the phases of the moon made my routine feel fun and fresh, and I enjoyed the excuse to intentionally prioritize self-care in different ways. It reminded me that sometimes your skin needs different things — not unlike our needs overall. During this week, I was reminded that sometimes slow and thoughtful self-care is best, and other times, I prefer trying out something new, exciting, or different.

Admittedly, though, I’m not completely convinced that the changes would have been less effective or enjoyable had I done them on different days (thus during different moon phases). As much as I enjoyed the new and old beauty rituals, what was arguably more interesting was seeing how my overall mood corresponded and shifted with the lunar phases. At the end of the day, I’m still interested in astrology, but I’m not necessarily any more of an expert or believer than before this week. However, after my last day of beauty routine changes, I did immediately look up the phases of the moon for upcoming important dates in my life, so maybe I am entering a new phase in my relationship with astrology, after all.