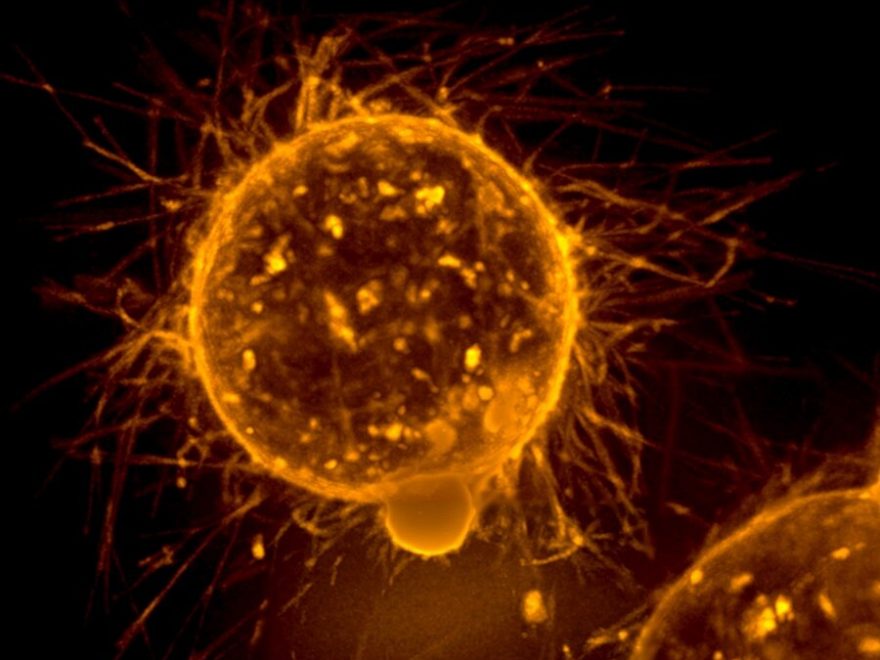 About one of every five breast cancers presents with high levels of HER2 proteins. Known as HER2-positive breast cancer, these tumors typically show an aggressive behavior—a greater likelihood of metastasis and relapse and decreased patient survival than HER2 negative types—and are physiologically dependent on the abundance of HER2. These findings prompted the question, if we take HER2 away from ‘HER2-addicted’ cancers, would cancer slow down?

Extensive research in the 1980s and ’90s showed that, indeed, treating HER2-positive breast cancer cells with antibodies that bind specifically to HER2 could slow down the cells’ growth in a laboratory dish.

These findings were confirmed in mouse models and subsequently led to the development of a HER2-specific antibody called trastuzumab for use in humans. Trastuzumab blocks the communication between HER2 and the tumor cells and elicits an immune response against the cancer cells by engaging the host’s immune system.

Can we stop HER2-positive breast cancer without chemotherapy?

“Patient outcome has markedly improved since the U.S. Food and Drug Administration approved trastuzumab in combination with chemotherapy for the treatment of HER2-positive breast cancer,” said Dr. Rachel Schiff, associate professor in the Lester and Sue Smith Breast Center and in the departments of molecular and cellular biology and medicine at Baylor College of Medicine. “And outcome can be improved further if two instead of one anti-HER2 therapies, referred now on as dual anti-HER2 therapy, are used, as we and others have shown. The more effectively we block the HER2 cascade of events, the more potent the antitumor effect.”

The increased effectiveness of dual anti-HER2 therapy prompted the researchers to investigate in mouse models the outcome of treating HER2-positive breast cancer exclusively with anti-HER2 therapies.

“Our animal studies showed that treating tumors only with dual anti-HER2 therapies and no chemotherapy resulted in complete tumor eradication, which, if translated to the clinic, may spare patients the toxicity and cost associated with chemotherapy,” said Schiff, who also is a member of the Dan L Duncan Comprehensive Cancer Center.

Encouraged by these promising results, Dr. Mothaffar F. Rimawi, professor of medicine and executive medical director and co-leader of the breast cancer program at the Dan L Duncan Comprehensive Cancer Center at Baylor, Dr. C. Kent Osborne, professor of medicine, Dudley and Tina Sharp Chair for Cancer Research and director of the Dan L Duncan Comprehensive Cancer Center, Schiff and their colleagues suggested that anti-HER2 therapy alone would suffice for treating a subset of HER2-positive breast cancers that are truly HER2-addicted. Furthermore, they proposed that adding chemotherapy may not offer extra benefit. This novel strategy of sparing chemotherapy, also called treatment de-escalation, was tested by the researchers in the TBCRC006 clinical trial.

In this clinical trial, patients with HER2-positive breast cancer were treated for 12 weeks with lapatinib and trastuzumab, without chemotherapy. Lapatinib is a small molecule, anti-HER2 drug that interrupts molecular pathways triggered by HER2. Combined, trastuzumab and lapatinib disrupt different molecular mechanisms that activate HER2 and thereby block the HER2-mediated cancer-promoting effects.

Twenty-seven percent of the patients with HER2-positive breast cancer achieved pathologic complete response (pCR) – their tumors disappeared in the breast despite a median tumor size of 6 cm (2.4 inches). This clinically meaningful pCR rate has now been confirmed in two similar chemotherapy-sparing trials, TBCRC023 and PAMELA, according to Dr. Jamunarani Veeraraghavan, assistant professor at the Lester and Sue Smith Breast Center at Baylor in the Schiff-Osborne lab.

“Our and others’ results showed that not all HER2-positive breast cancers benefit from the de-escalation strategy,” Veeraraghavan said. “We needed a plan to differentiate patients who are candidates for de-escalation approach from those needing additional therapy.”

In this study published in Annals of Oncology, the researchers looked for signals or biomarkers that would allow them to identify candidates for the de-escalation approach among patients with HER2-positive breast cancer.

Finding the tumors that may not need chemotherapy

Based on preclinical and clinical evidence, the researchers hypothesized that the truly HER2-addicted tumors that may benefit from anti-HER2 therapy alone would need to have high levels of HER2 gene and protein. They further hypothesized that the normal or mutated status of the PI3K pathway, a key molecular pathway that mediates HER2 signaling to promote tumor growth, also would affect the response of these HER2-addicted tumors to anti-HER2 therapies.

Using tissue samples the researchers already had from the TBCRC006 clinical trial, they explored the possibility that looking at two instead of one biomarker (high levels of HER2 and PI3K pathway activation) would enable them to predict which tumors most likely would respond to the dual anti-HER2 therapy without needing chemotherapy.

A parallel similar study analyzed tissue specimens from the PAMELA clinical trial looking at levels of HER2 RNA and HER2 signaling. Published in the Journal of the National Cancer Institute, the results of this study support the approach of combining biomarkers HER2 RNA levels and HER2 signaling to better predict which patients would most likely benefit from the dual anti-HER2 treatment.

“Our findings suggest that there is a clinical subtype of breast cancer with high HER2 levels and intact PI3K pathway that is especially sensitive to HER2-targeted therapies without chemotherapy,” Schiff said. “Identifying these tumors by measuring the levels of HER2 gene amplification and PI3K pathway status warrants validation.”