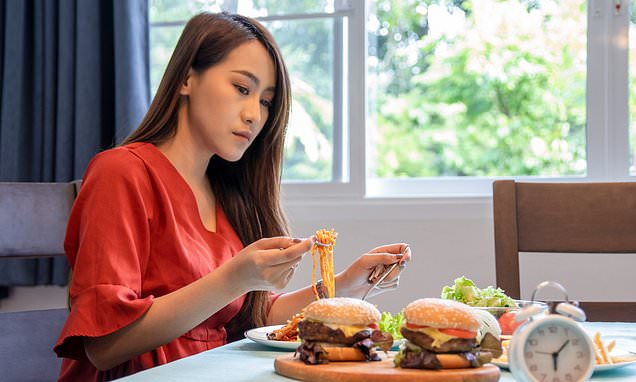 Why you should eat dinner BEFORE 6pm: Scientists say eating later in the evening may make you more likely to develop heart disease

It’s not just what you eat that raises your risk of heart disease – researchers now say what time you eat may also play a role.

Women who have dinner after 6pm could face a greater risk of the world’s leading killer, a year-long study has suggested.

Columbia University experts, who studied 112 women, say choosing to eat earlier in the evening could be a ‘simple’ way of to lower heart disease risk. 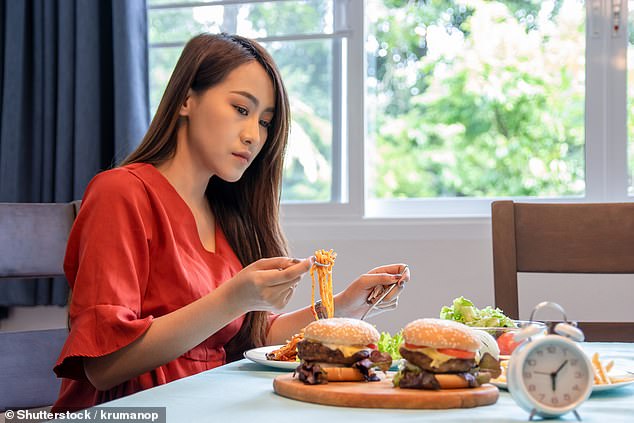 Women who eat dinners after 6pm are more likely to be struck down with heart disease because they have elevated blood pressure and BMI, a study found

They include not smoking, being active, eating healthily and staying slim, as well as having low cholesterol, blood pressure and blood sugar levels.

Studies have consistently shown people who stick to more of the measures have a lower risk of heart disease and stroke.

Participants – aged 33 on average – were given a heart health score at the start of the study. This was then repeated one year later.

Volunteers kept electronic food diaries on what, how much and when they ate for one week at the beginning and near the end of the study.

WHAT WERE THE HEART DISEASE RISK MARKERS?

In a study of employees at one company, annual healthcare costs were on average $2,021 less for employees with at least six ideal Life’s Simple 7 metrics compared to employees with two or fewer ideal metrics.

People with at least five ideal Life’s Simple 7 metrics had a 78 per cent reduced risk for heart-related death compared to people with no ideal metrics.

Results, to be presented at the American Heart Association’s Scientific Sessions in Philadelphia, showed eating after 6pm was linked to poor heart health.

Women who consumed a higher proportion of their daily calories after this time had higher blood pressure, on average.

They were also more overweight and less able to control their blood sugar – both of which are also serious risk factors for heart disease.

Every one per cent rise in calories consumed in the evening increased poor heart health markers, the results also showed.

A similar finding occurred with every one per cent increase of calories after 8pm, which added more evidence to the theory.

Findings persisted even after adjusting for age and socioeconomic status. The study did not look at men – but swathes of studies have shown similar.

For example, Harvard researchers found men who regularly indulged in a ‘midnight snack’ had a 55 per cent higher risk of coronary heart disease than men who didn’t. They surveyed nearly 27,000 men about their eating habits in 1992.

Dr Nour Makarem and team did not specify how many calories was the threshold for the findings. But they currently recommend calories after 6pm should be no more than 30 per cent of the daily total.

This would be around 600 for women and 750 for men, based on government guidelines.

The team also did not prove that eating late led to heart disease. They only uncovered a link to well-known risk factors for the condition.

But it is not the first study to establish the link. Dozens of other scientific trials have produced similar results.

A study published in 2016 suggested eating later at night keeps the body on ‘high alert’ when it should be winding down.

Blood pressure should drop by at least 10 per cent before sleeping. But Turkish researchers found a meal interrupts this.

Experts think this is because eating releases a rush of stress hormones when the body should be starting to relax.

A late dinner, the result of modern day life, is also going against our natural body clock, Dr Makarem said.

‘We evolved to adopt a 24-hour light and dark cycle, meaning we eat and are active during the day and we sleep at night,’ she told Today Show.

‘But our more demanding work schedules and commutes push everything later and now we are eating at unconventional times.

‘So far, lifestyle approaches to prevent heart disease have focused on what we eat and how much we eat.

‘These preliminary results indicate that intentional eating that is mindful of the timing and proportion of calories in evening meals may represent a simple, modifiable behavior that can help lower heart disease risk.’

She called for further trials to investigate the link, as well as larger ones to try and prove a cause and effect.

Professor Kristin Newby, part of an initiative created by the AHA to raise awareness and improve the heart health of women, said the findings were ‘important’.

She said: ‘I think it provides some really interesting insights into an aspect of nutrition and how it relates to cardiovascular risk factors that we really haven’t thought about before.

‘If you’re healthy now or if you have heart disease, you can always do more. That goes along with being heart smart and heart healthy.’