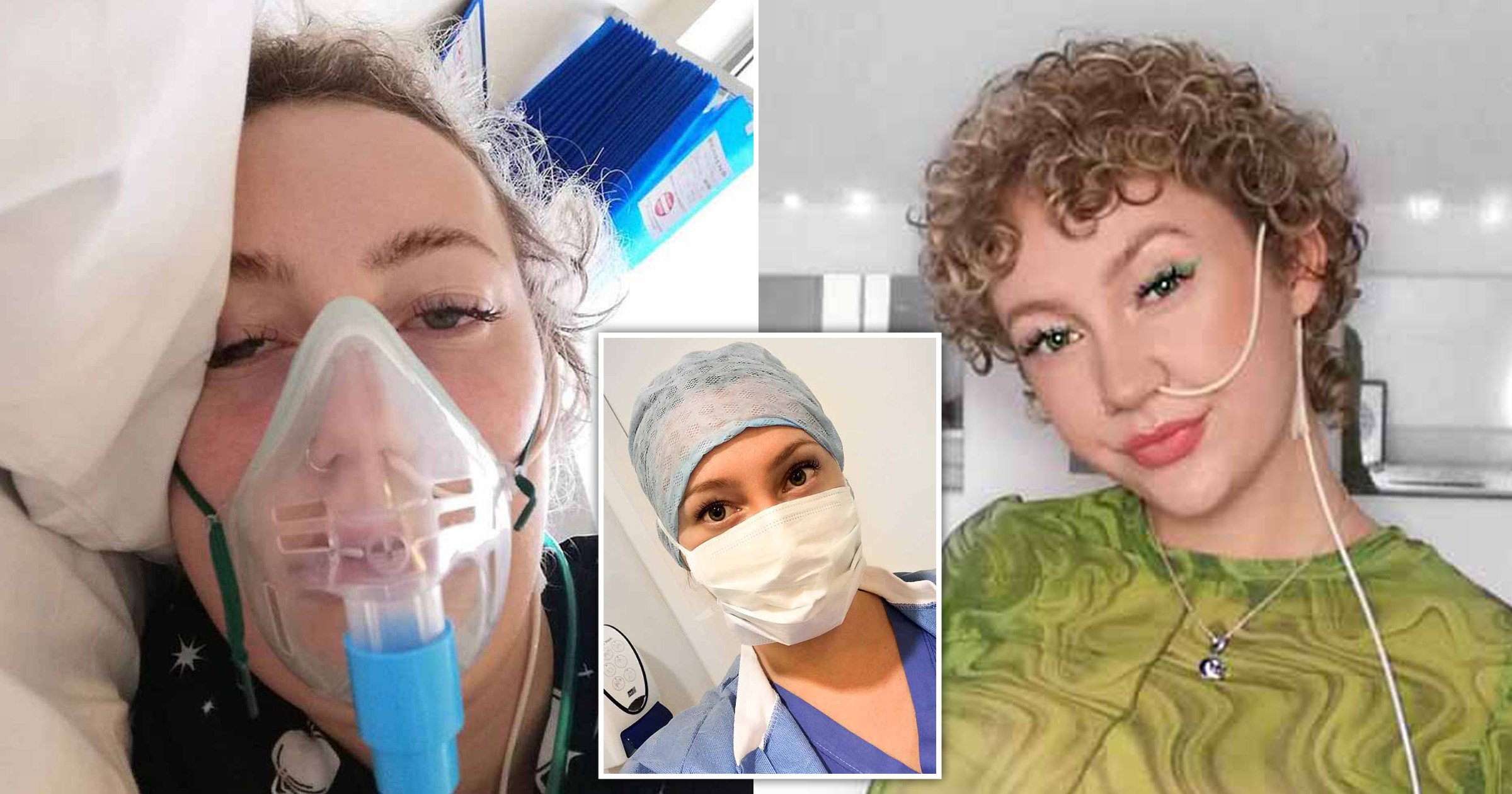 When Mia Lainchbury, 26, spotted a festive sandwich in a petrol station while her boyfriend was filling up, she knew she had to have it.

However, soon after devouring it, the former student found herself gasping for air and scared for her life.

‘I remember thinking “ooh, this tastes so good”,’ she recalls. ‘But, within 10 minutes, my airway was closing, and I couldn’t breathe. Luckily, on this occasion, I didn’t need CPR.’

Although she needed to go to hospital after the episode, sadly this isn’t an uncommon occurrence for Mia. In the last three months alone, she’s needed to be resuscitated on three occasions due to severe allergic reactions.

Already diagnosed with a wide range of chronic conditions, she believes her recurring anaphylaxis – a severe and potentially life-threatening allergic reaction – was triggered in September when she was left struggling to breathe after taking an antibiotic.

Since then, Mia’s ill-health has led to her having to leave her nursing course and move back home with her insurance manager mum Steph Lainchbury, 51, telephone engineer dad, Gavin, 55, and brother Callum, 23, in Hailsham, East Sussex.

She’s also needed CPR three times because of her extreme allergies – once after reacting to the heat of the shower and twice to unknown triggers.

Recalling her frightening experience with the Christmas sandwich, which saw her admitted to hospital, even after she used two EpiPens, Mai said: ‘What began as a lovely treat ended an hour later with three paramedics and breathing equipment.

‘I have no idea of the exact trigger, but I won’t be tucking into a sandwich again in a hurry.’

Mia now believes she has mast cell activation syndrome (MCAS), which is a little-known condition in which people experience repeated anaphylactic episodes.

It’s not recognised by all doctors, so Mia’s not been able to be officially diagnosed. Instead, she learned about it through the chronic illness community online, which is where she often speaks with other sufferers.

Mia, who has been dating her partner Peter, 28, for four years explained: ‘Every time I have CPR, I risk losing mental capacity if the oxygen isn’t reaching my brain.

‘So, despite only being 26, I’ve already talked to my doctor about signing a do not resuscitate or DNR order, so if I do end up in a coma, it takes the stress of making a decision away from my family.’

‘Now it’s become ridiculous,’ she admitted. ‘Anything can set off anaphylaxis.

‘I can’t even burn candles now, as a gingerbread scented one triggered a reaction.

‘Everything I use, from washing powder onwards, has to be totally bland.’

When she had an anaphylactic episode in October due to an unknown trigger, Mia went into respiratory arrest and says she still could her parents’ harrowing conversation while they performed CPR on her.

She said: ‘I could hear my parents talking about their fears that I was dying in front of their very eyes.

‘It felt like I was dreaming, as I could hear the paramedics saying I could go at any minute.

‘That’s really stuck with me.

‘I really remember this attack, as my granddad was visiting from Spain.

‘I started to feel unwell, but stupidly fought it and just kept taking antihistamines, as I didn’t want to cause too much of a fuss.’

On another occasion, Mia’s boyfriend had to perform CPR on her because a simple hot shower triggered a reaction.

‘It was horrific for him. He was on his own giving me CPR and I could hear the panic in his voice,’ she recalled

‘All I’d done was have a shower, so I think the reaction was triggered by the heat and changing temperatures.

‘Then I had another allergic reaction that day in hospital. I was rushed to resuscitation, and I was prepped for an induced coma.

‘Luckily they put a nasal breathing canular into my throat and created an airway.

Before she started experiencing random allergic reactions, Mia was already struggling with several chronic ailments, including asthma, irritable bowel syndrome and Ehlers-Danlos syndromes – a group of conditions causing very flexible joints and stretchy, fragile skin – as well as postural tachycardia syndrome (POTS), which is an abnormal increase in heart rate on standing or sitting up – when she first started having symptoms of MCAS.

Recently, she was also diagnosed with a collapsed bowel, meaning part of her bowel operates with a ‘telescoping action’, often blocking food from passing through.

It means she now relies on being tube fed into her small intestine for nutrition.

‘And I have what I call my Dora the Explorer rucksack, which plugs me into my feed, which I have with me for 20 hours a day.

‘I call the remaining four hours my freedom hours.’

While her poor health means Mia needed to leave her nurse training course during her second year in 2020, she’s hoping one day she can return.

However, Mia also has to deal with the complexity of being happy for her friends while they reach milestones, like getting married, having babies and advancing their careers, while her life has been put on hold by her health.

She’s not even able to move in with her boyfriend because her condition is too unstable.

She said: ‘Sometimes I look at all that’s happening to me and how close I keep coming to dying and feel totally overwhelmed by it all.

‘But trying to raise awareness of chronic illness has given me a purpose.’

‘I have done my best to raise awareness of chronic conditions, to remove the stigma around them and the support I have received in return has been overwhelming.

‘I would literally go as far as to say that, by telling me about MCAS, my friends in these online groups have saved my life.’

Feeling unable to get the help she needs through the NHS, Mia is now hoping to raise £5,000 for treatment with an immunology specialist.

She said: ‘Thanks to the money raised so far, I have been able to pay £250 for a video appointment with a specialist.

‘It’s such a relief, as my situation really could be life or death.’