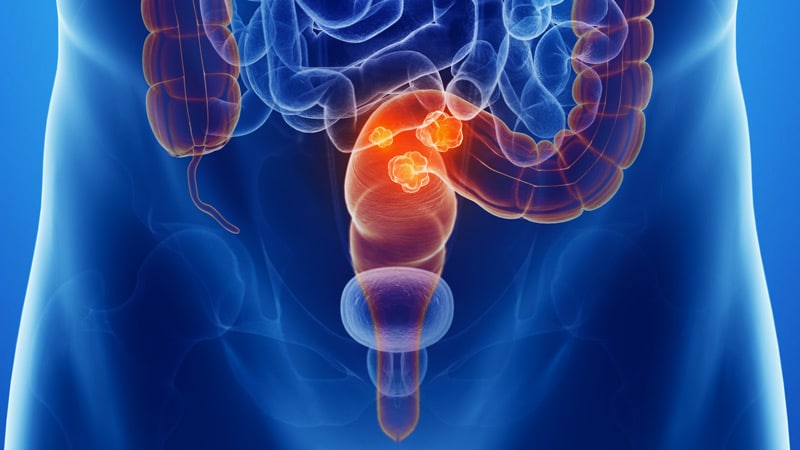 A team from New York’s Memorial Sloan Kettering Cancer Center (MSK) has developed a clinical calculator that reliably estimates the risk of rectal cancer recurrence over time among patients who undergo surgery or who hold off following a complete response to total neoadjuvant therapy.

Notably, recurrence-free survival was similar regardless of whether patients who initially opted for watch-and-wait management underwent surgery 3 months following neoadjuvant therapy or a year later — a finding that supports the safety of delaying surgery under an appropriate surveillance protocol.

“We are very excited about the calculator. It is dynamic, and conditional survival estimates can be made any time after completion of treatment,” Martin R. Weiser, MD, chair of colorectal surgery at MSK, told Medscape Medical News.

The study was published online September 29 in JAMA Network Open.

The calculator may be particularly useful for assessing the safety of nonoperative management — an emerging strategy that avoids surgery and preserves the rectum for patients with rectal cancer.

In one recent study of patients with stage II or stage III rectal adenocarcinoma, organ preservation was achieved in up to half of those who underwent neoadjuvant therapy.

However, currently available clinical calculators and staging systems are static, rely on pathologic stage, and cannot predict the likelihood of distant recurrence for patients who opt for watch-and-wait management.

Since watch-and-wait management is “relatively new, there are no calculators available to estimate recurrence,” said Weiser, also professor of surgery at Weill Cornell Medical College in New York.

The current MSK calculator is an updated version of a previously validated calculator the MSK team developed for estimating the likelihood of recurrence and survival among patients with rectal cancer.

With the new version, the team introduced several modifications to provide dynamic estimates of recurrence for patients who opt for watch-and-wait management, immediate surgery, or delayed surgery.

Weiser and colleagues incorporated conditional modeling into the original calculator to allow the probability of recurrence-free survival to be updated, depending on whether the patient remains in nonoperative management or undergoes delayed surgery.

The authors then validated the new calculator among 302 patients with stage II or III rectal cancer, including 204 who underwent surgery within 3 months of completing neoadjuvant therapy and 98 who opted for watch-and-wait management.

All patients received neoadjuvant therapy with induction systemic FOLFOX/CAPOX followed by chemoradiotherapy. Patients underwent proctoscopy and MRI every 3 to 6 months for the first 2 years and every 6 to 12 months over the next 3 years in addition to annual CT scans.

Among the watch-and-wait patients, 54 had undergone surgery more than 3 months after therapy because of regrowth or by choice, and 44 had continued watch-and-wait at data cutoff.

Overall, 3-year recurrence-free survival did not differ significantly among these groups — with rates of 73%, 71%, and 70%, respectively — indicating that oncologic outcomes were not compromised by delaying surgery and that local tumor regrowth does not lead to metastases.

The accuracy of the model improved over time. The concordance index increased from 0.62 at 3 months after neoadjuvant therapy to 0.66 at 12 months — an increase that’s greater than typically observed between successive iterations of American Joint Committee on Cancer staging, the researchers say.

This calculator “helps answer the question, ‘Now that I am 2 years out from rectal cancer treatment, what is my chance for recurrence?’ ” Weiser said. “The further you are out from completion of treatment and without disease, the less likely you are to recur.”

“The decision of whether or not to proceed with surgery after [neoadjuvant therapy] with a complete clinical response can be a challenging one for the patient,” said Nina Beri, MD, a medical oncologist at NYU Langone Perlmutter Cancer Center in New York City, who wasn’t involved in the study. “This clinical calculator estimates the likelihood of recurrence with time, keeping in mind that the risk of recurrence is dynamic and changes as time passes, as recurrence is more common in the year after neoadjuvant therapy.”

In an accompanying editorial, Tsuyoshi Konishi, MD, PhD, agrees about the utility of the calculator, noting it provides “objective conditional survival estimates of operative vs nonoperative management at any time during follow-up.”

However, Konishi notes that the calculator does require external validation in a larger multicenter cohort and in patients treated with different neoadjuvant therapies. The regimen that patients in the study underwent is considered “a modern neoadjuvant approach with a higher response rate compared to conventional chemoradiotherapy alone,” writes Konishi, of the University of Texas MD Anderson Cancer Center, Houston.

In addition, a watch-and-wait approach requires a meticulous surveillance protocol to identify and salvage a local regrowth, which the study researchers were able to provide, Konishi says. However, nonoperative management without an appropriate surveillance protocol might result in poorer oncologic outcomes, he cautions.

Beri also cautioned that “we must be mindful that the study has some limitations, including the retrospective nature and the smaller number of patients who ultimately underwent the watch-and-wait approach.”

But overall, the study indicates that “this tool can assist clinicians and patients with shared decision-making in determining whether to proceed with surgery after a complete clinical response after neoadjuvant therapy, or to opt for a watch and wait approach,” Beri said.

Support for the research was provided by the National Cancer Institute, the National Institutes of Health’s Loan Repayment Program, the John and Michelle Martello Research Fund, and the Pollack Family Research Fund. Weiser has received personal fees from Precisa. Beri and Konishi have disclosed no relevant financial relationships.